Planning a trip to Amsterdam and deciding on where to stay? Check out our suggestions of five top hotels in Amsterdam.

With its stunning river views and historic architecture, few hotels in Amsterdam offer such glamour and decadence as the Amstel. The luxurious setting has attracted such eminent guests as Queen Elizabeth II and Michael Jackson.

Located in a 19th-century building that stands alone the bank of the river Amstel, this was the city’s first grand hotel. Every inch of the Amstel screams opulence, from the gleaming marble lobby to the heated, river-level indoor swimming pool. Rooms are spacious, peaceful and packed with luxury amenities. As well as the pool, there is a spa, sauna and excellent restaurant, La Rive.

The closest attractions to The Amstel are the Royal Carré Theatre and Hermitage Amsterdam Museum. It will take you 25-35 minutes to walk to the Van Gough Museum and Ann Frank House. There’s a metro station just a 2-minute walk from the hotel and you can also rent a bicycle: by far the most pleasant way to explore Amsterdam.

Double rooms start from €360 (£320) per night off-season – a small price to pay for such luxury. Breakfast is not always included in the price so make sure you check before you book.

The centrally locaked Toren is a glamorous boutique hotel overlooking the Keizersgracht canal. Comprising two 17th century canal houses, the hotel is just a 3-minute walk to the Ann Frank Museum and a 10-minute walk to the Red Light District.

The Toren has 38 richly decorated rooms and suites, some offering canal views. Rooms have a luxurious old-world feel, with four-poster beds, chandeliers and dark wooden furnishings. For a romantic sojourn choose one of the luxury suites as they are fitted with an in-room Jacuzzi. Rooms vary in size, the dinkiest being the ‘Cozy Rooms’ at a compact 11-18 m².

The Toren is not strictly a family hotel, but extra beds can be added to a larger room for children. There is a decent breakfast served in the hotel bar and you can also purchase snacks here such as paninis and salads.

For such an excellent location, rooms are a bargain: a double costs around £150.

During Amsterdam’s “Golden Age” in the 17th century the Hoxton was home to the Mayor. Nowadays, this city-centre hotel is formed of a network of five canal houses and boasts 111 rooms. Décor is quirky – think brass chandeliers, hexagonal mirrors and warm colours. Rooms come in all shapes and sizes from the compact Shoebox Rooms to unique Concept Rooms that feature unusual and grand furnishings. The affectionately named “Tubby” contains the hotel’s only roll-top bathtub.

The Hoxton has a buzzing brasserie-style restaurant that is open all day long, serving such delicacies as bitterballen (a Dutch meatball containing beef broth, butter and flour). The hotel also serves a delicious fresh breakfast with excellent coffee.

The Hoxton is situated in a relatively quiet district along the Herengracht Canal and is less than half a mile from Dam Square. It will take you less than 10 minutes to walk to the Anne Frank House and Royal Palace of Amsterdam.

This historic Ambassade Hotel is also located along the Herengracht Canal and is an artistic alternative to The Hoxton. The hotel contains an impressive collection of avant-garde paintings from the CoBrA movement and there is also a rather remarkable library that contains more than 4000 books, all of which have been signed by famous authors who have stayed at the hotel.

The Ambassade has quite an eccentric layout as it was originally 10 separate canal-side buildings. Rooms are large, comfortable and decorated in rich fabrics and avant-garde artwork. All rooms have an en suite bathroom and most also have a bath.

Guests can enjoy a fine dining experience at Brasserie Ambassade, which serves a delicious assortment of classic French cuisine. Alternatively, the Library Bar is a quiet and relaxing place to enjoy a cocktail, beer or cup of coffee while leafing through one of the many books on display.

This is one of Amsterdam’s hippest boutique hotels and is hidden behind a 17th century arch and courtyard on the edge of the Keizergracht canal. The building has quite a fascinating history, having once been an orphanage and soup kitchen. Nowadays it has a mix of old-world charm (some rooms have wood-panelled walls) and contemporary elegance.

The 40-room hotel is named after the Welsh poet and writer, Dylan Thomas, which fits well with its modish atmosphere. There’s even a Dylan Thomas suite that comes with a fully stocked drinks bar inspired by his love of boozing.

The Dylan has a dinky 24-hour gym and you can also rent bicycles from the hotel. Breakfast is served in the all-day bar brasserie and includes a selection of coffees, fresh juices and speciality teas. There is also a Michelin star restaurant, Vinkeles, which serves modern French cuisine with an international twist.

The hotel is situated about a minutes’ walk to both Anne Frank’s House and the Van Gough Museum. 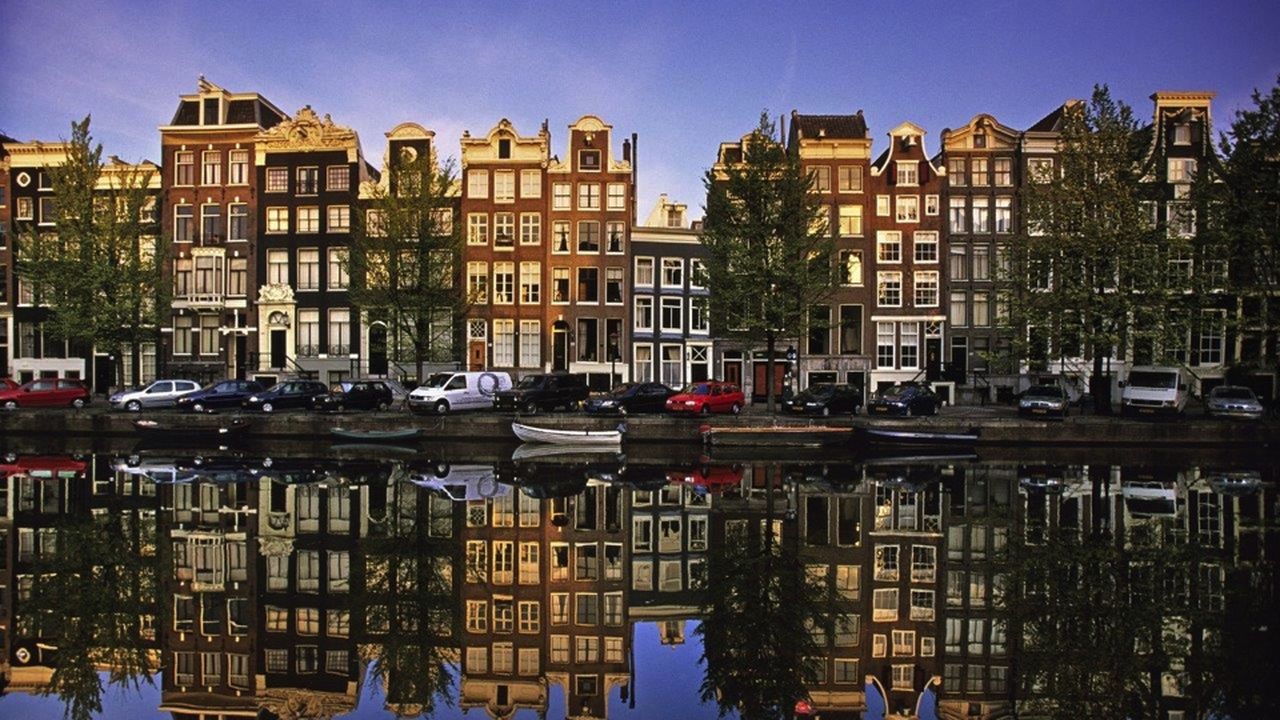