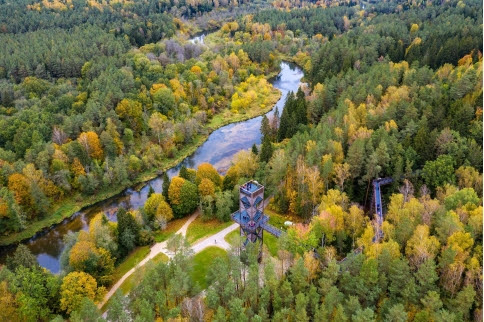 6 reasons why you should visit Lithuania in autumn

One of the biggest perks of living in Lithuania is its famously distinct seasons. Each time of year  — Winter, Spring, Summer, and Autumn — paints the country’s landscapes in different shades and fills the senses with new imagery, sounds, and senses. The latter is one of the most beloved seasons in Lithuania, as the country’s cities and nature become enveloped in a mystical, yet cozy aura of mists, auburn leaves, and shorter days.

While every season has its own set of related experiences, the true beauty of a Lithuanian Autumn is most felt in its forests, which cover around one-third of the country. Shades of rust and copper stretch as far as the eye can see and the surrounding quiet fills the heart with peace. Below are the six best rural locations to experience a crisp and golden Lithuanian Autumn.

Mist-covered and nostalgic marsh. For many, Autumn represents a return to a more quaint way of life after the maximalism of Summer. Escaping into the mist-covered wilderness, such as the one surrounding the Mūša Tyrelis Cognitive Walkway, is an easy way to tap into inner peace and is quiet. Its system of bogs, swamps, and peatlands covers an impressive area of the Žagarė Regional Park, which is mostly undisturbed by humans. Along the 8 km path, the silence and solitude are only broken by the flocks of black grouse, gray cranes, and geese that inhabit the area. The natural Miknaičiai lake, along with the Mūša and Juodupis rivers, as well as a number of other minor lakes, are all present in the marsh.

Foggy bogs peppered with islands. Similarly, the Čepkeliai Marsh is a natural gem of Lithuanian nature, mostly unaffected by human activities. An elevated bog that is bordered by dense pine trees covers most of the region. The elevated bog in the south progressively transforms into a fen with its sedges, reeds, and osiers. A 1,5 km long educational route meanders around the marsh, taking tourists through the pine woods, marshes, and sand dunes of the reserve while acquainting them with the typical flora found in these ecological habitats. The wooden educational route leads to a tower and observation platform from where you can view a large area of foggy bog and its numerous little islands covered in forest.

Hiking in the Curonian Spit. The Lithuanian seaside — usually a vibrant and bustling vacation spot during the Summer months — takes on a whole different vibe as dunes become empty and the skyline turns grey. The Curonian Spit — a land between the lagoon and the sea — is famous for its serenity as well as flora and fauna during Autumn. This unique UNESCO World Heritage Site is a fragile, peaceful ecosystem of pine groves and dunes that offers something for everyone. The pine forests are populated by deer, elk, and wild boar and cover about 70% of the area. The region’s hiking path goes all the way along the Spit, so you can choose whatever section, from Grey Dunes to Pervalka and Preila, the Juodkrantė hike, the easy loop around Nida, or the path of Preila to Nida.

Lithuania’s own golden sea. One of the most invigorating things about fall is the vast piles of red, yellow, and brown leaves that line the streets like brightly coloured clouds. However, heading up to a vantage point reveals a whole sea of golden forests. One way to do this is the Treetop Walking Path complex in the Anykščiai Pinewood — the first of its kind in the Baltics and Eastern Europe. The 300 m long walkway rises slowly concluding with a 34 m tall observation tower at the end. Romantic views of the vast woodlands, the Šventoji River, and the surrounding plains.

Waving goodbye to migratory birds. For other creatures, Autumn is a sign of the long travels that await them. When birds start to migrate en masse in this season, up to a million fly along Lithuania’s coastline each day. The Ventės Ragas Ornithological Station is one of the first bird-ringing stations in Europe, established in 1929. During the busiest migration season, this ringing station gets up to 8,000 birds — from Alder Tits to White-bellied Thrushes, to Northern Grey Eagles — in a single day. They are released after being marked with Lithuanian rings and allowed to resume their southward migration. Its surroundings afford stunning views of the expansive Curonian Spit and Nemunas Delta, and the station’s ornithologists not only tell interesting stories to curious visitors but also give them the possibility of ringing birds taken from the catching traps.

Thousand steps along the banks of a river. Long ago, the ice age’s melting glaciers in Lithuania carved a deep gorge in the soil, forming the valley of the Dūkšta River, a canyon of unmatched beauty in all of Lithuania. Just less than an hour outside of Vilnius, the capital, lies the forested and meandering Dūkšta Cognitive Trail,  where alcoves, castle mounds, and other unusual historical remnants are strewn about with uncommon plant and animal species. On the way along the trail, visitors can also climb two high outcrops, see the thickest oak tree in the area, the Holy Oak of Daubai, and admire the magnificent panoramic view of the Neris valley from the lookout point of Oaks Hill. The oak was revered as a special tree in Lithuanian paganism up to the fifteenth century. The tree, which is now a national emblem, was formerly the location where high priests would burn and tend sacred everlasting flames.