New High-Speed Train Will Connect Miami To Orlando This Year

Brightline, the only privately owned and operated rail company in the United States, has announced it will be expanding its current South Florida route to extend all the way to Orlando.

But a new station will open in Orlando in 2023, connecting passengers from Miami to Orlando in just 3 hours. (Driving between the two cities currently takes 3.5 hours.)

The Brightline train will reach speeds of up to 125 MPH as it zips up through the state from South Florida to Central Florida.

Orlando is a logical choice for Brightline’s expansion since the city receives nearly 70 million tourists per year. Visitors flock to Orlando for its theme parks (Walt Disney World Resort and Universal Orlando being the two biggest ones) and other attractions.

When Will The Orlando Brightline Station Open?

Although an exact date has not been released yet, Brightline has confirmed that the Orlando Brightline station is on track to open in 2023.

The train company has released new details about the station, which will be located inside Orlando International Airport.

Brightline, which is the only private intercity rail operator in the United States, currently has several stations in South Florida. This new expansion will connect South Florida with Central Florida on over 170 miles of tracks.

The Brightline station will be located inside the newly-opened Terminal C at Orlando International Airport. 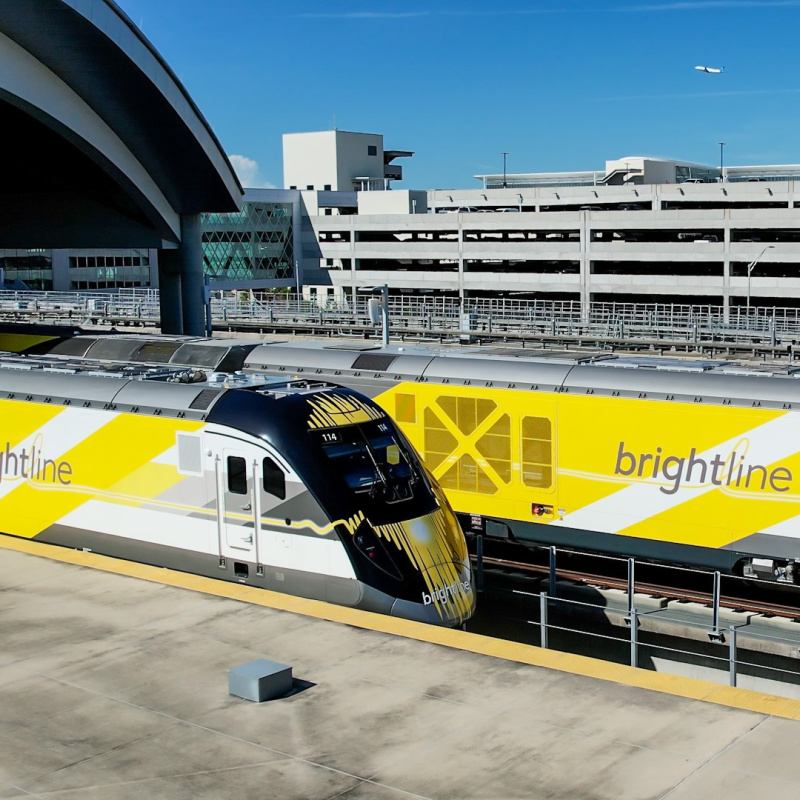 From here, passengers will easily be able to connect to the airport’s other terminals and other transportation options.

How Much Does The Brightline Train Cost?

SMART is a standard fare, while PREMIUM is a business-class fare and includes access to a pre-boarding lounge, larger seats, and complimentary snacks and beverages onboard.

Currently, fares from Miami to West Palm Beach start at just $10 one-way for SMART tickets, while PREMIUM tickets are around $35 one-way.

It’s expected that the fare from Miami to Orlando will start at around $100 one-way, although official pricing information has not yet been released.

Monthly passes are currently available for Brightline’s South Florida routes, starting at $229 per month, which allows for unlimited trips.

Booking your tickets online in advance is the best way to get a good deal on Brightline tickets, and fares are often higher if you buy your tickets at the station.

Other Future Expansions For Brightline

That number is only expected to increase as new stations open throughout the state, making it easier than ever to travel in Florida. After the Orlando station opens in 2023, further expansion is planned to cross over to the western side of the state. Eventually, a station will open in Tampa, along with future intermediary stops.

Brightline offers an eco-friendly way to travel, too, with a 100% carbon-neutral footprint. It’s a step in the right direction for the United States, which lacks a cohesive high-speed rail system.

In addition to sharing new details about its upcoming Orlando station, Brightline also announced a partnership with Uber.

This new partnership will bridge the gap between Brightline stations and passengers’ final destinations. It will also cut down on wait times and allow a passenger to immediately step into an Uber when they get off the train.