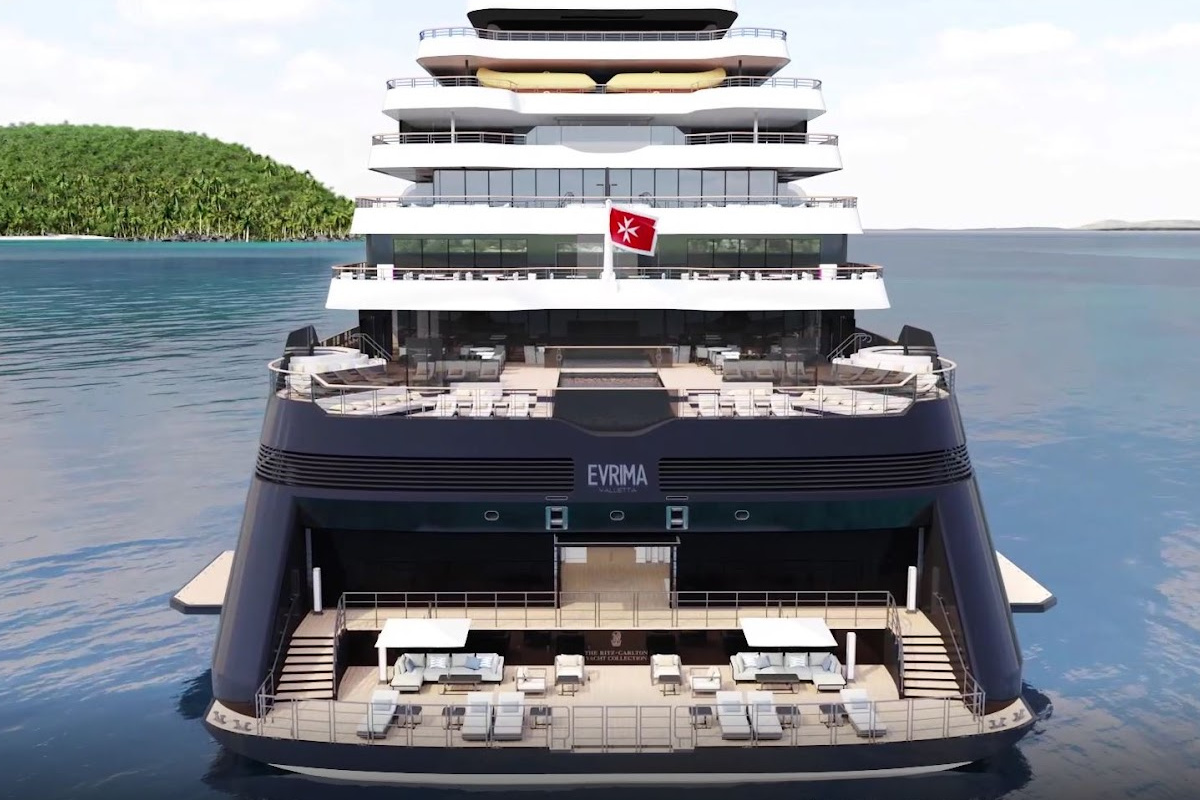 Ritz-Carlton’s new luxury superyacht Evrima has finally set sail after 32 months of delay. Initially scheduled to launch in February 2020, the 298-passenger ship departed from Barcelona on Saturday for a 7-day cruise to Nice. Stops on the ship’s maiden voyage include Palma de Mallorca, Saint-Tropez, and Antibes. Suites aboard the new floating Ritz-Carlton start at $7,600, with additional mandatory and optional charges depending on each guest’s itinerary.

Travel Off Path first reported on the delayed launch nearly three years ago. The company has since blamed the significant delays on stalled construction and supply chain disruptions caused by the pandemic. The Evrima was built in Astilleros Barreras Shipyard in Vigo, Spain, and was designed by Swedish maritime architecture firm Tillberg.

What Evrima may lack in punctuality, it makes up for in amenities. Guests can choose from a range of luxury comforts and exclusive activities, true to the Ritz-Carlton brand. A choice of suites is available, each with its own ocean-view private terrace, higher-than-average ceilings, and king-sized beds. With an incredibly high staff-to-guest ratio, passengers can expect a high standard of personalized service and attention to detail.

“Every element of the luxury yachting experience was carefully considered in creating Evrima,” Douglas Prothero, the line’s CEO, said in a news release. “This attention to detail and innovation, and our commitment to delivering highly personalized, immersive journeys will place The Ritz-Carlton Yacht Collection in a league of its own, promising unforgettable getaways for both long-time cruisers and those who are new to the space.”

Once on the ship, cruisers can lounge by the infinity pool or enjoy a variety of water sports from Evrima’s own marina, including paddleboarding, snorkeling, and sailing. The signature ESPA treatments offer an array of relaxing pampering, and the spa even includes a Gentleman’s grooming salon. There are plenty of dining options, with the highlight being S.E.A, a new concept from Chef Sven Elverfeld of Aqua, a three Michelin-starred restaurant in Wolfsburg, Germany.

The Ritz-Carlton Yacht Collection has gone beyond just luxury onboard amenities to offer uniquely curated onshore excursions at each of the ship’s stops. While the details vary by location, guests can expect one-of-a-kind cultural experiences, overland expeditions, and bucket-list activities at each destination.

Ritz-Carlton and Marriott loyalists will also benefit from Marriott’s Bonvoy program, where they can use points to pay for the luxury cruise. Members can redeem 180,000 points and save $1,000 on cruise fare, or about 2 million points for an entire 10-day cruise. Those Bonvoy members with elite credits and elite status will also be eligible for onboard perks such as exclusive events and housekeeping perks.

Demand for the Evrima sailings has been strong, despite the rocky start involving eight launch cancellations. The Ritz-Carlton Yacht Collection announced in March that they have ordered two additional superyachts to add to their fleet in 2024 and 2025. The Ilma and Luminara will be built at the Chantiers de l’Atlantique shipyard in Sant-Nazaire, France, a switch from the Evrima’s birthplace in Spain, suggesting the company was unhappy with the extended delays in construction.

The brand’s three ships will change course seasonally, with sailings initially scheduled for the Caribbean and Mediterranean. Cruises will range from seven to ten nights, depending on the location and season. The boats are also available to hire for private charter for those willing to shell out a substantial amount of money.

With Saturday’s launch of the Evrima, Ritz-Carlton has officially joined the trend of luxury cruising and commercial superyachts. Also onboard with the trend, according to Bloomberg.com, are the Four Seasons Hotels and Resorts, Seabourn, and Silversea brands. Four Seasons Hotels and Resorts recently announced an offshoot of their company – Four Seasons Yachts, which will see three 190-passenger ships come afloat, likely in late 2025. The Four Seasons Yachts will be constructed in Italy by Fincantieri, a well-known shipbuilder. It can be expected that if these luxury cruises continue to prove popular, more brands will jump on board the trend.