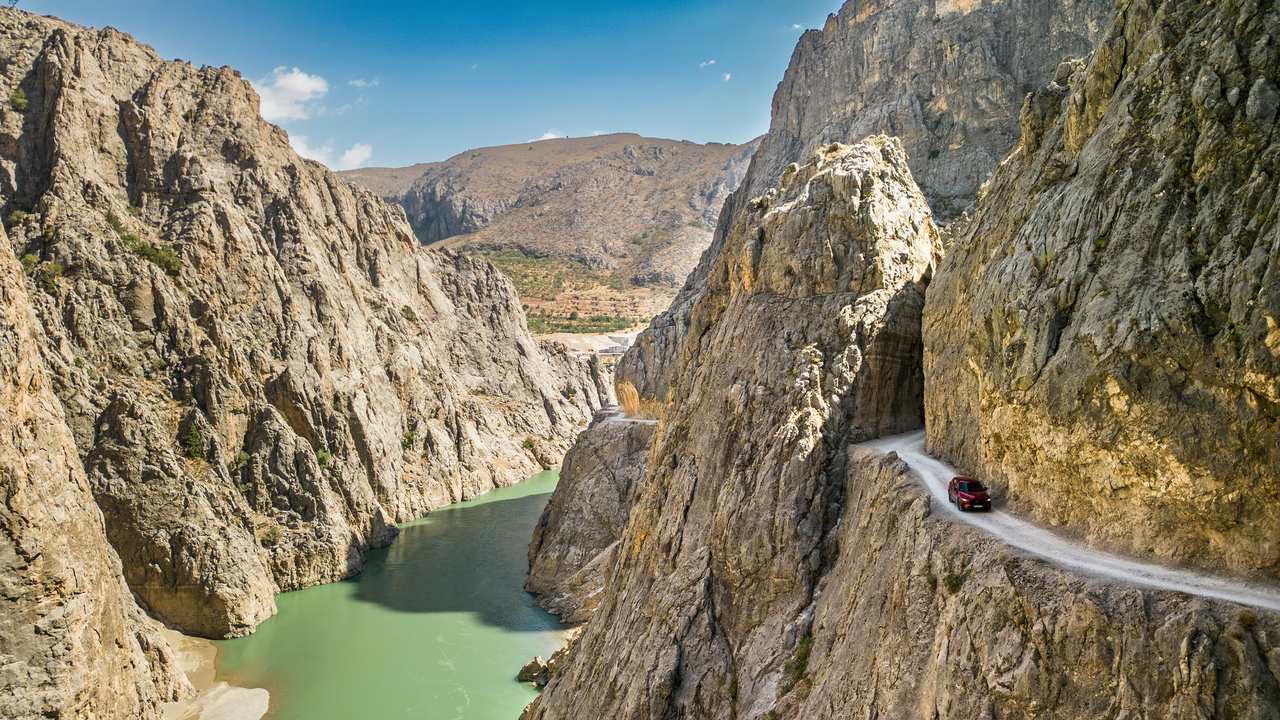 If you are up for a thrill consider a road trip taking in the Stone Road (Tas Yolu) of Kemaliya in eastern Turkey – dubbed “the most challenging road in the world”. I enjoyed a titillating drive on the Stone Road as part of an 8-hour road trip in a Mazda CX-50 from Elazig to Cappadocia.

It is a short stretch of 10km/6.5 narrow, unpaved miles tucked away in the Munzur mountains connecting Divrigi in the region of Erzincan with the quaint Ottoman town of Kemaliye. The rocky gorge is so deep that the sun hardly ever reaches the bottom.

From Elazig, the drive was through a beautiful sandy rugged landscape. It seemed remote, yet there was plenty of action, roadside with sheep herders tending their flock, errant cows popping up on the road, geese strolling nonchalantly on the side of the road honking at passing traffic and people working in vineyards.

Soon the roads turned to gravel, rocky mountains towered above on one side while sheer cliffs offered a drop into the Euphrates as the river followed our route. 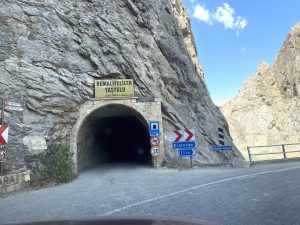 Tunnel to the Stone Road

And then I saw it; the Kemaliye tunnel, a short tunnel that leads onto the twisty yellow-hued, gravel-strewn Stone Road, seemingly no wider than a belt.

The scenery was gorgeous, but there were several moments when my focus was solely on how well my Mazda would grip and handle those bends.

At that moment, I didn’t care that it took 132 years to complete. Or that it took the blood sweat and tears of the locals hacking through five kilometres of rock. According to a memorial on the road’s first bridge, some sadly lost their lives while carving through the unpassable rock face of the Karanlik Kanyon aka The Dark Canyon, one of the deepest canyons in the world.

All I could think (actually shout) was that they could have made these dirt roads wider FGS. At its narrowest, the road is less than two metres wide. I simply forced myself not to look down as I passed around 450 metres of cliffs that reached 800 meters/2,625 feet at their highest.

It was unthinkable to accelerate beyond five miles an hour while navigating those bends with their precipitous drops.

On the bright side, I got out of the car from time to time to gaze with some awe at the drop and the compelling scenery of the gorge naturally created by the emerald green Euphrates, the longest river in Southwest Asia. Indeed the river has its thrills with river boats sailing through the gorge. I could see tourists looking up at the scenery, and I imagined folk were wondering what it was like in the skies. 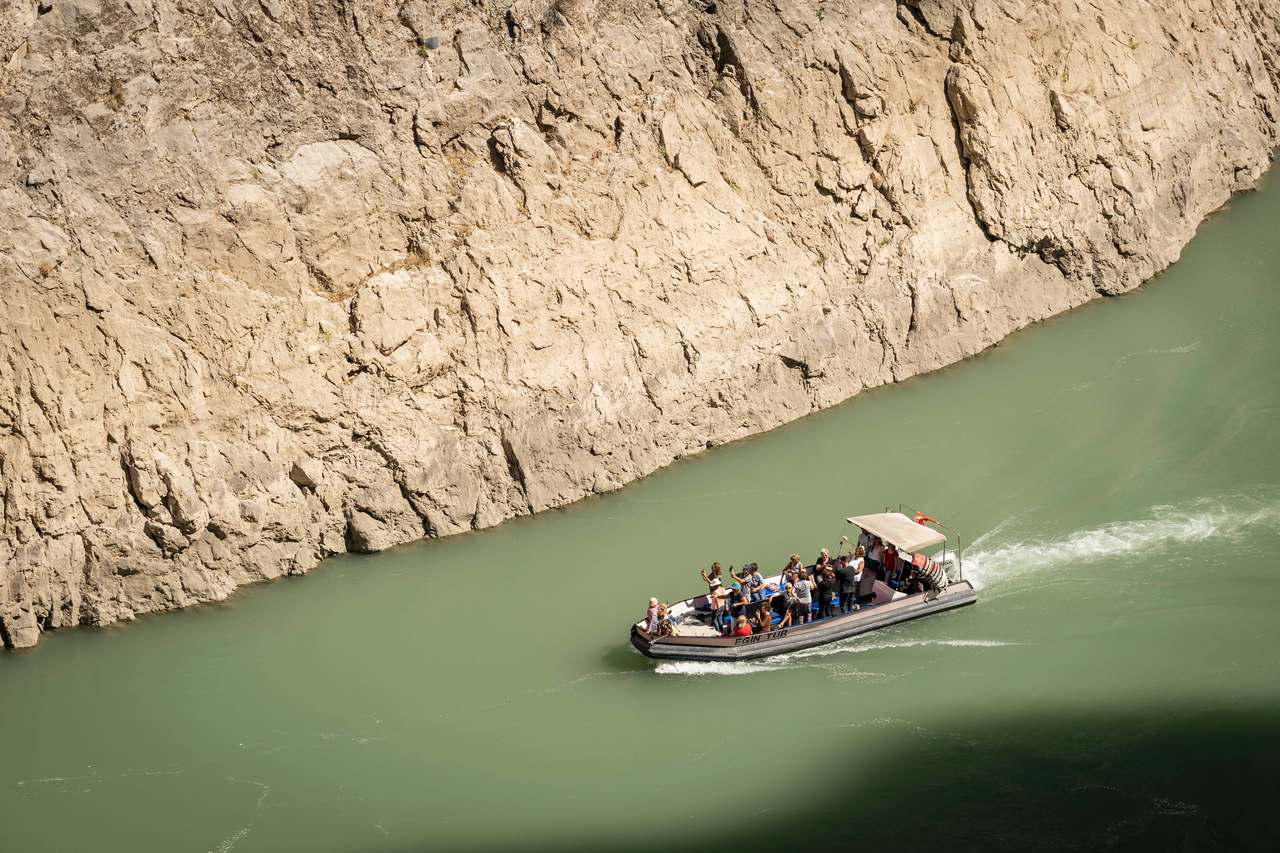 Done with the contemplations, I then passed through 38 tunnels that were fun to drive through. Large holes in the tunnel walls let in daylight, and I would not have wanted to be burning rubber there after dark. 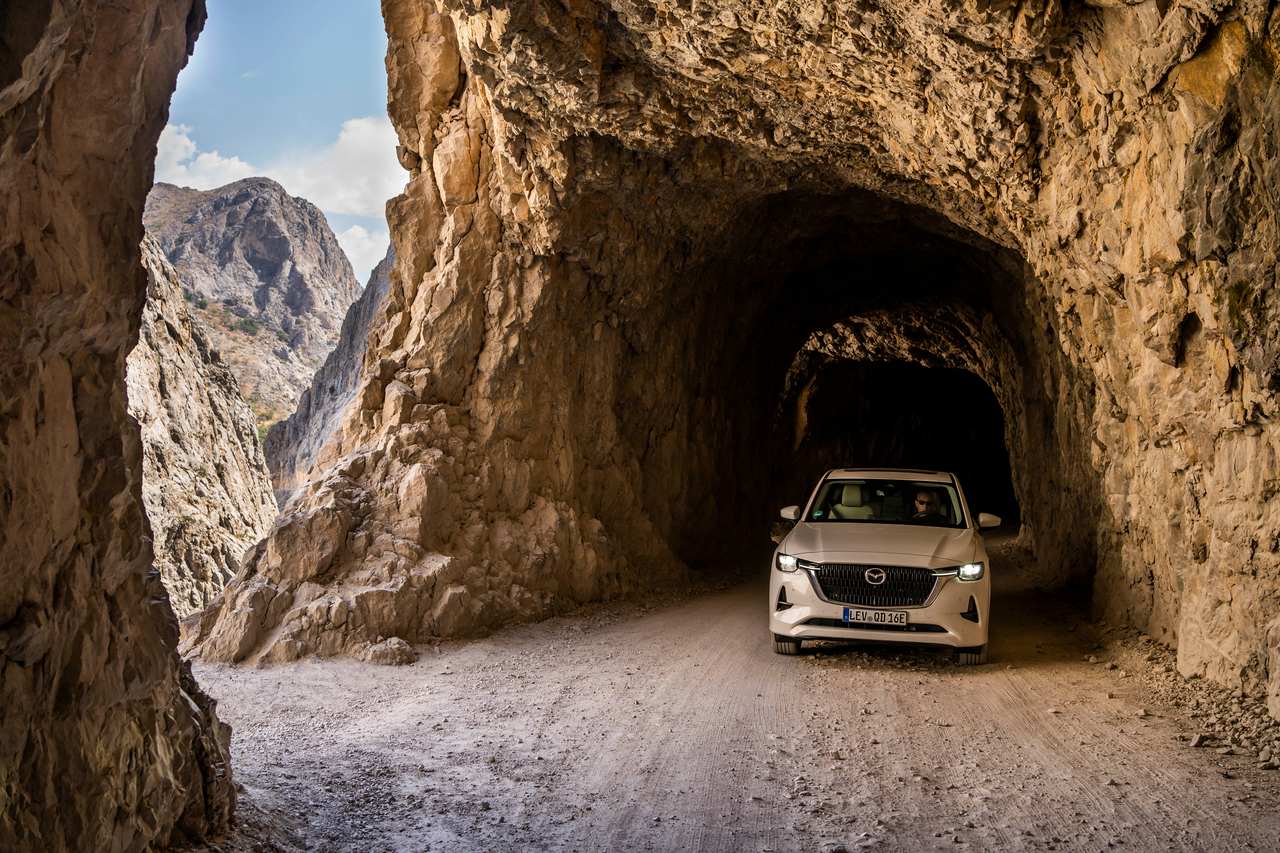 Driving through a tunnel on the Stone Road

After the tunnels the landscape turns into verdant countryside with gently curvy roads, sometimes rising again and now and then a sheer drop appeared. No matter as after experiencing the Stone Road, I had become hardened. I could relax now as I headed to the town of Kemalye. 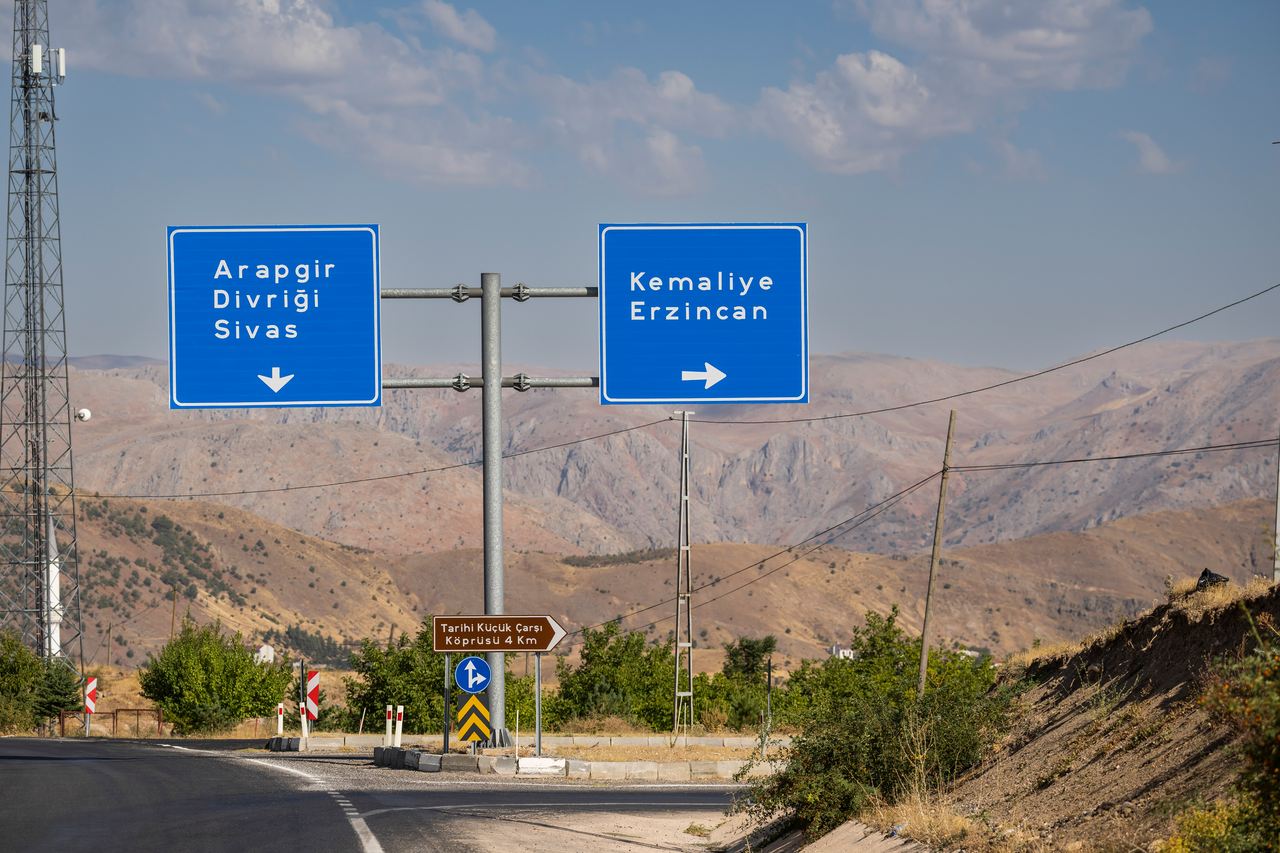 On my way to Kemaliye

What a surprise Kemaliye (aka or Eğin) turned out to be. The town was built on an incline of between 30-45%, and with its wooden buildings and quaint hilly roads surrounded by the Munzur Mountains, it felt like I had entered a small village in Switzerland. I later learned that the town’s design was typical of Ottoman/Anatolian urban landscape.

The come down from all the excitement left me hungry, and I took a seat at Bozkurt Turkish restaurant in Kemaliye. I tucked into a Turkish dish called Kavurma (pieces of braised beef) with rice and some Turkish tea.

Tarok the owner of the restaurant asked in all seriousness if I was going base jumping (jumping off a high cliff with a parachute) into the canyon with the others later that day. All I could let out was a nervous laugh.