Insight from fine-art photographer David Yarrow on the release of his new book, David Yarrow

“There are no universal rules in photography – only personal ones. My central premise is that if photography was a language, then focus would be the most important word in that lexicon. Focus deliberately includes or it deliberately excludes, and it should be emphatically clear what the photographer is trying to say.”

So says renowned fine-art photographer David Yarrow when discussing his latest monograph, David Yarrow, a monster large format coffee table book of 368 glorious pages. In it, he has showcased 150 images of some of the world’s most compelling animals, many of which, unsurprisingly, were taken in Africa.

In recent years he has put conservation at the heart of much of his work, and royalties from ‘David Yarrow’ and supporting charity events will be donated to conservation efforts around the globe, namely WildAid in the United States and Tusk in the United Kingdom.

Here he has shared 6 of the images from the book, and an insight to the stories behind the photographs.

I take most of my elephant images in Amboseli for three reasons, all of which helped make this image work.

The first is that the flat and arid topography of the park lends itself not only to clean backdrops, but also to good predictive analysis of elephant movement. The second is that I can get out and about and set up remotes without infringing upon any laws or endangering myself. Third, the elephants in Amboseli can be very big.

This was one of my most coveted images in 2017, and the limited-edition print sold out within a year. In truth, it is a lucky shot on the widest-angle lens I have – the 20mm. The subject needs to be close, and this requires a great bit of predictive analysis and good fortune. I am clearly not with the camera!

The composition is an act of god, but I am willing to take it – the frame within a frame. The whole picture – almost full frame – will never be repeated. This immersive study of the elephant kingdom is a complete one-off.

This image of a hunting lion was taken as I was on my way back to camp in Lewa Downs. My metadata suggests the photograph was taken as late as 6.47pm, and conveying the intent and purpose of this stunning lion was therefore a technical compromise.

The encounter happened with no warning. I needed to be quick to get low in the grass and also get the right lens – the light was falling every 20 seconds. The strong wind demanded a higher shutter speed than I would have liked, but it certainly served to give the photograph some extra zing.

I am sure those who know Lewa will recognise the hills in the background. The whole image says East Africa.

Finding a silverback gorilla high up in the volcanoes of Rwanda in a position offering a sense of place and a wider narrative is a tough ask. After 10 trips, I had not had a break. There had been 10 encounters, but they were always in dense forest with little or no backgdrop.

Some of the guides knew my frustration at the lack of depth I was finding and suggested a troop that was quite far west of the volcanoes. This was going to be one hell of a climb, and I was already at 9,000 feet. Normally the wall crossing to the rainforest is about 20 minutes from a drop-off point, but the day I went it took 90 minutes – all uphill.

But when I reached the wall and looked up to the rainforest I could see why the area had potential. There were plenty of ridges and lookout points. It was still dense, but there seemed more room to breathe in places.

I left most of my gear with my porters and took just one camera and my trusted 58mm lens. When I reached the troop, they were on the move and I focused on the lead silverback. And so it was that I got my moment. The perspective was exactly what I had been looking for.

This image ended up close to the preconceived vision I had on arrival at the Zambezi River. My goal was a full-on face-off portrait of a hippopotamus, which emphatically conveyed both the enormity of a bull and also the primeval bone structure of his face.

I wanted to get close and low, but with thousands of hippos on the Zambezi, this required either a large dose of bravery or a momentarily compliant animal. In most cases, hippos will drop their heads and go underwater if approached – they are mammal submarines with little tolerance for humans.

I had one card up my hand: the help and support of the best guide on the lower Zambezi. To him, each hippo on his stretch of the river has a personality and, in a few cases, even a name. There was one hippo – Dexter – who showboated and was not intimidated by boats or humans.

My guide recommended that I lie on the other bank 30 yards across the creek and wait until I grabbed Dexter’s attention. Luckily, my presence had no impact, but the angle required me to crawl even closer through mud and water. As Dexter moved towards me, it was not easy to think about single-point focus on the camera, composition, or exposure from the sun. It was a highly intense five seconds, but I got the shot.

There are more cheetahs in Namibia than any other country, and that tends to be my preferred destination to work with the animals either in staged shoots or on their own. However, whenever one goes to photograph the animal, it is a real test to be authentic. I struggle a little with their faces. The best images of cheetahs I have seen tend not to be portraits, but images that convey speed.

But this close portrait is given dynamism by two unrelated factors. First, the cheetah’s head is wet, which adds some textural detail to her face. It lends some definition and character to a face that can sometimes be a little bland and clown-like. It is marginal, but it does make all the difference.

Second, the cheetah is walking up a rock face from the riverbed, which offers an angle that is just a little different. There is more menace and more sense of danger. In the field, I give relentless thought to where I am shooting from. It is probably the most important dynamic in my quest for immersion, and the perspective in this image is good.

The shimmering heat of the high sun, the mirage behind the giraffes, and the composition itself combined to create an almost surreal image. It was an “animal Broadway” or an “animal Times Square” in the heat of East Africa. I had never had this number of giraffes all within 100 yards of me.

The composition fell kindly, but I had to be patient to allow the two lead players to be as close to me as possible. I also firmly believe that giraffes are best photographed in the company of other giraffes, and in an exclusive collective in a setting as raw and elemental as Amboseli, they remind us just how remarkable our planet is.

Amboseli can be very hot – indeed the name means “place of dust”. The irony is that for most of 2018 and early 2019 there was so much rainfall that the dry lake on which this image was taken actually returned to being a lake. Those who know this area well would know this image could not have been taken during that period. Weather patterns are never constant here, and I have long given up trying to preplant trips on the basis of what is traditionally the dry or wet season. It is what it is.

David Yarrow is available from most book retailers.

For more on David Yarrow, and to buy his books or prints, visit https://davidyarrow.photography 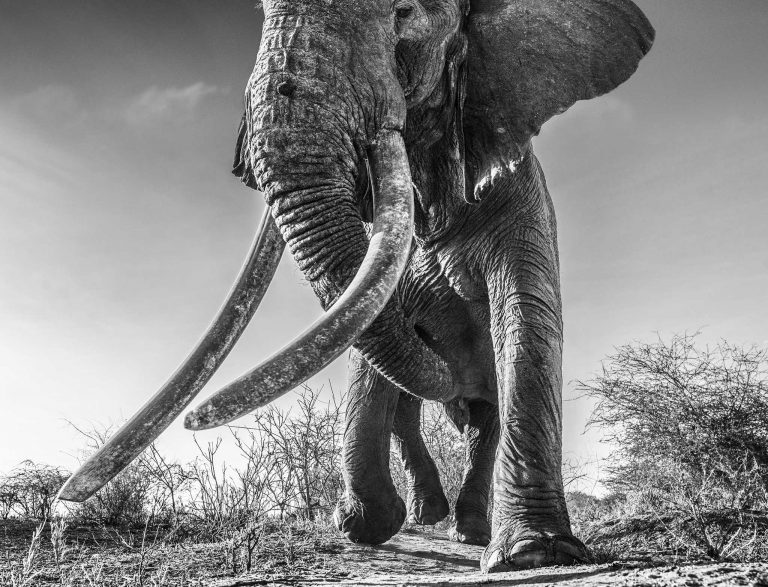