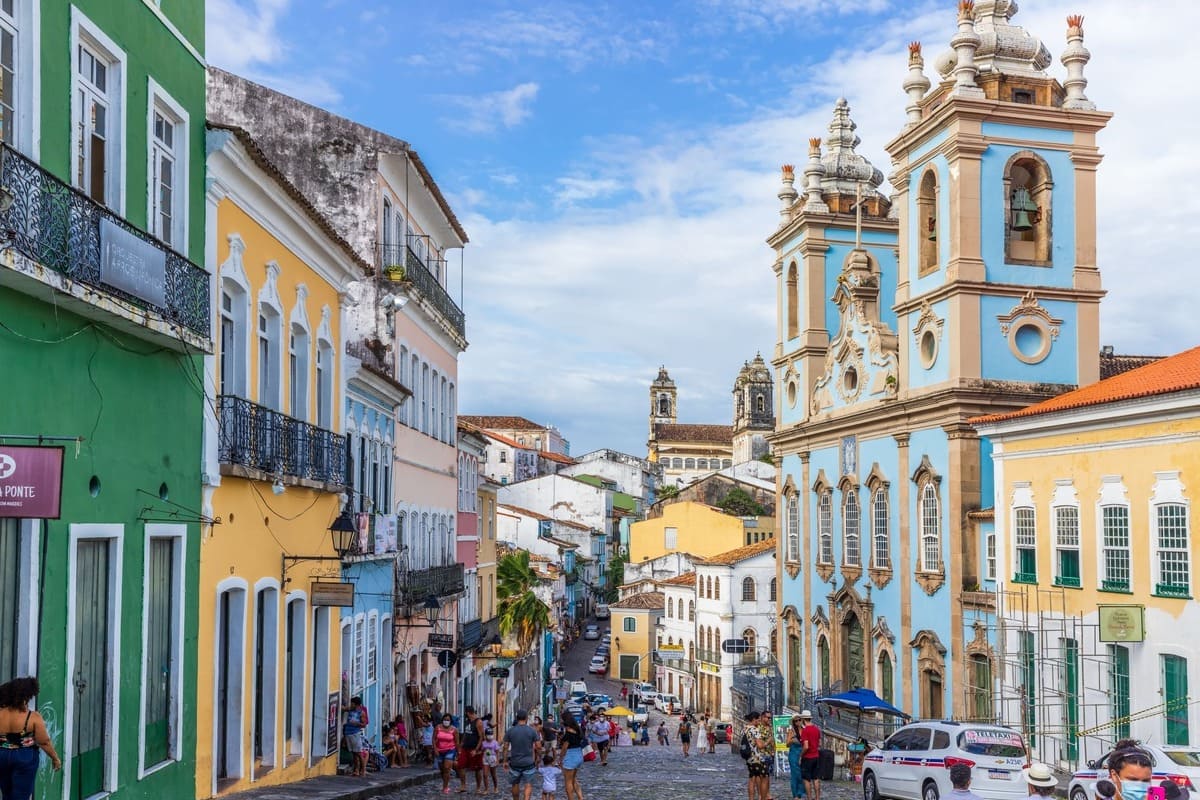 We get it, the panoramic view of Rio from atop Corcovado is breathtaking and surely not to be missed, and you’ll definitely want to spend an entire afternoon lounging by the famous Ipanema Beach sipping on some coconut, but trust us when we say the city doesn’t even come close to being the best for tourists in Brazil… much less its most beautiful destination.

When you think Brazil, we’re sure the first image that comes to mind is that of a soapstone Christ standing tall with his arms open wide as he mercifully watches over a vibrant metropolis below, rising out of a tropical jungle with majestic green peaks and the azure Atlantic Ocean for a backdrop. Yep, that’s Rio for you.

While it is certainly a world-class destination, it is not representative of Brazil as a whole, or its surprising diversity:

A Beautifully Preserved Colonial Treasure In The Brazilian Northeast

Salvador is the intriguing capital of the northeastern state of Bahia and one of the oldest cities not only in Brazil, but in the Americas. Although indigenous peoples were native inhabitants of the area prior to the arrival of Europeans, Salvador was first established as a fortified settlement in 1549.

Back then, the Portuguese, among the first Europeans to make landfall in the region, built a gigantic fort named São Salvador da Bahia de Todos os Santos (or Holy Savior of the Bay of All Saints). Overlooking an important bay, it quickly became an important port in the era of Transatlantic crossings and the slave trade.

In the 16th century, as a Portuguese colony, Salvador was comprised of both upper and lower cities, modeled after Europe’s own. On the higher part, administrative and religious buildings were erected; down in the busy port area, onlookers would be welcomed to the shouts of energetic merchants selling all sorts of items, from cured meats to rarer local condiments.

Interestingly, this well-defined cityscape hasn’t changed much in the 21st century: the former upper city corresponds roughly to the modern-day Pelourinho, Salvador’s and most easily recognized landmark and arguably Brazil’s prettiest district. It was designated a World Heritage Site by UNESCO in 1985, and you’ll soon understand why:

Is Salvador The Most Colorful And Vibrant City In Brazil?

Wandering the cobblestone streets of Pelourinho feels like stepping back in time. It feels like it has barely changed since the Portuguese founders laid the first stone, an impressive feat for a Brazilian city, considering the country’s rapid, unsustainable urbanization often happens in detriment to the upkeep of heritage sites and colonial-era buildings.

To draw a comparison, one of Rio’s most impressive palaces and a legacy of the Belle Époque was unceremoniously demolished as a military-controlled Brazil sought to ‘modernize’ itself in the seventies. Although Rio is almost as old as Salvador, only a handful of pre-20th-century monuments are still standing.

Luckily, Salvador’s Historical Center was spared most of the destruction: Portuguese urbanism is an indelible mark in Pelourinho, full of colorful facades and richly-decorated churches. The grand architecture and amazing History are not Salvador’s only strengths, though: it is often called the African capital of Brazil.

Unlike the Southeast or South of the country, where the vast majority of residents are mostly or exclusively of European descent, be it Portuguese, Italian, or German, or the multi-ethnic hub of Sao Paulo, the Northeast historically served as a safe haven for formerly-enslaved Africans in the wake of the abolition of slavery.

In other words, black and multi-racial Brazilians form a majority of the populace, in stark contrast with the predominantly-white Southern cities of Florianopolis or Curitiba. With their ancestral traits imported from their continent of origin, they have contributed enormously to the creation of a distinct Afro-Brazilian, Northeastern identity.

Whether it’s the spice-infuced cuisine you won’t find in Rio or anywhere else, unique religious customs – essentially a blend of African and European influences – and ethnic garments, the Bahiana capital is a different, unexpected flavor of Brazil tourists will not be expecting, which is precisely what makes it such a fascinating, and fun destination to exlore.

Northeastern Brazilian Cuisine Is Unlike Anything You’ve Ever Tried Before

If you’re a foodie, then Salvador should definitely be on your bucket list. Our favorite Northeastern Brazilian dishes include:

The Land Of Never-Ending Summer

Beach lovers, we see you at the back: the Brazilian Northeast is home to the country’s most stunning coastline, having rightfully earned the title of ‘Brazilian Caribbean’. As those of you who have been to the city of Rio, not the wider state, will know, the sea – albeit gorgeous – is not exactly the shiniest blue.

In Bahia, turquoise waters glisten in the sun, and the temperature rarely drops below 73 degrees year-round, reaching highs of 100 in summer (between December and early April). Sitting on the Atlantic coast, Salvador has direct access to numerous under-visited beaches, where Copacabana’s overpriced coconuts and surging crowds are not a concern.

Some of the best swimming spots within close proximity to Salvador are:

If you’re flying to Brazil in the near future, make sure you read up on the latest political developments and follow the travel advice to remain safe and avoid disruption when vacationing in the country.