Not only the gateway to the Croatian Islands, Split is also one of the most lively cities on the Adriatic and well worth a visit.

For far too long, Split has been a place that people pass through before they catch a ferry to the islands. Yet it’s Croatia’s second city and of great historical importance as it grew out of a Roman palace built by the Emperor Diocletian in 295 AD. That’s still there, and packed inside its narrow streets are 220 buildings, including churches, chapels, cafes and restaurants. The palace’s southern wall is now Split’s attractive seafront Riva, lined with palm trees.

Five kilometres inland is Salona, the sprawling ruins of Roman Dalmatia and the birthplace of Diocletian. Above the city, the Klis Fortress dominates the pass and along the coast is the medieval walled town of Trogir. And, of course, glorious beaches are close by and the Island of Hvar is just an hour’s boat ride away.

The Roman Emperor Diocletian built his retirement home here between 295 and 305 BC, but he died not long after he moved in. Oher Roman rulers settled in the years afterwards, but it was the inhabitants of nearby Salona who sought protection behind its massive walls in the 7th century.

Over the centuries, the Roman buildings have been repurposed, with Diocletian’s mausoleum becoming the cathedral and the Temple of Jupiter converted into its baptistry. The Bronze Gate, by the sea, is the main entrance and this gives access to the vaulted palace basement where goods were stored. These days it’s an enormous cavernous space exactly mirroring the imperial living quarters that stood above.

In the 5th century, Christians destroyed the Emperor’s sarcophagus and converted his tomb into the octagonal Cathedral of Saint Domnius. It’s named after one of Diocletian’s Christian martyrs and still preserves its original Roman dimensions. The Baptistry has the barrel vaulted ceiling and decorative frieze of the original temple, although a bronze John the Baptist has replaced the statue of Jupiter.

On a hillside above Split, once a Greek settlement, Salona was occupied by the Romans in 78BC and they made it their capital of Dalmatia. It grew to become the fourth largest city in the Roman Empire with a population of around 60,000. Churches were built here, after Emperor Constantine legalized Christianity, but in 614 it was attacked by Slavs and Avars. The Roman citizens fled to Split and the city was gradually abandoned.

It’s a sprawling site and only a fraction has been excavated. You can still walk on sections of the old city above the field and olive groves. Highlights include Manastirine, a necropolis for Christian martyrs, clustered around the ruins of a fifth-century basilica, the public baths and an aqueduct. There’s also an Amphitheatre, built in the 2nd century to seat 60,000 spectators. 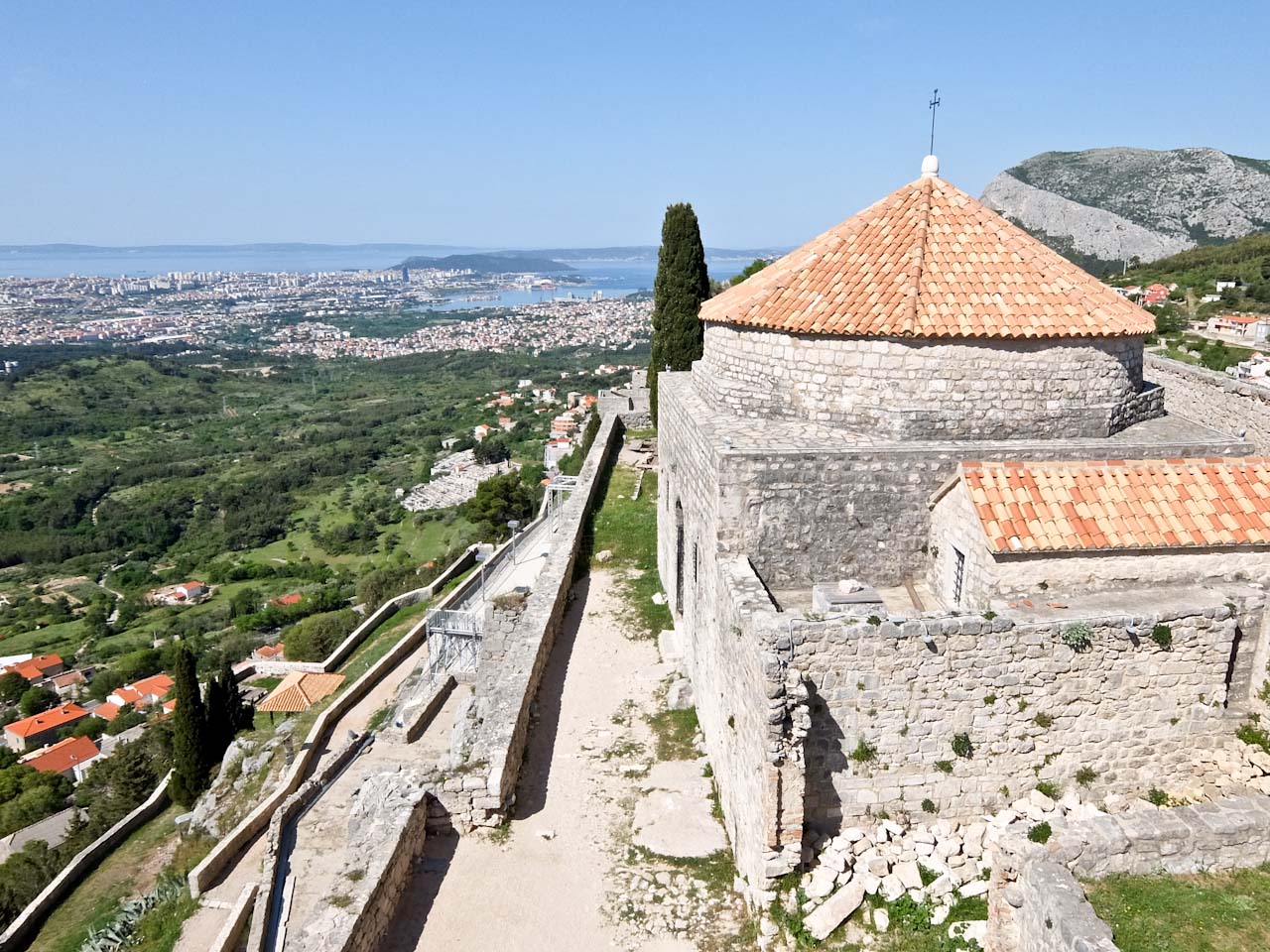 High on a rocky outcrop, at 360m, Klis Fortress has guarded the Dalmatian frontier for over 2000 years. It was built by the ancient Illyrian tribe Dalmatae and taken over and enlarged by the Romans. After the fall of the Empire, it became a royal castle, the seat of many Croatian kings, before passing between Ottomans, Venetians and finally Austrians. It’s also been a location for Game of Thrones.

Cobbled walkways lead you up to the defensive positions, where there are glorious views over to the sea and the countryside behind.  A remnant of the Turkish occupation is the mosque, topped by a dome, which is now a Catholic church. Inside the main building is a small museum, with displays of arms and uniforms, and a display detailing the history of the castle. 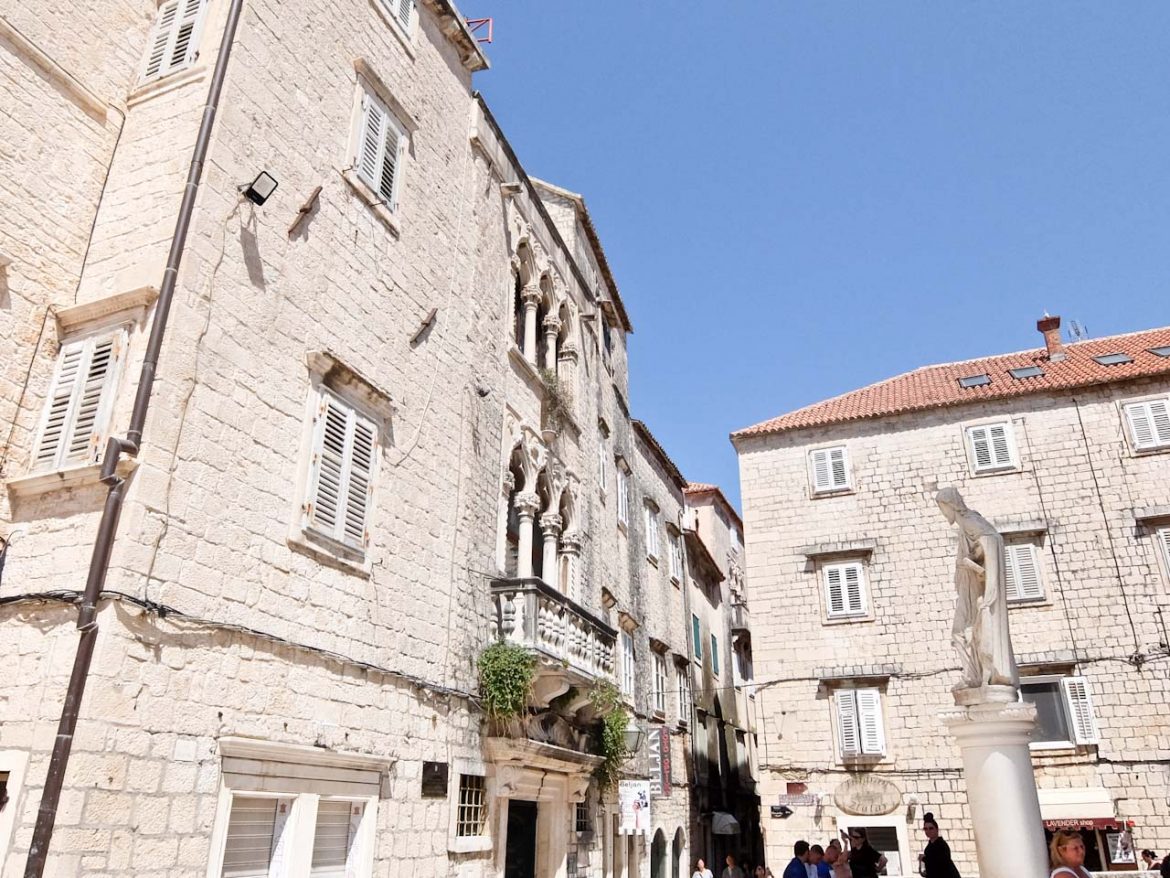 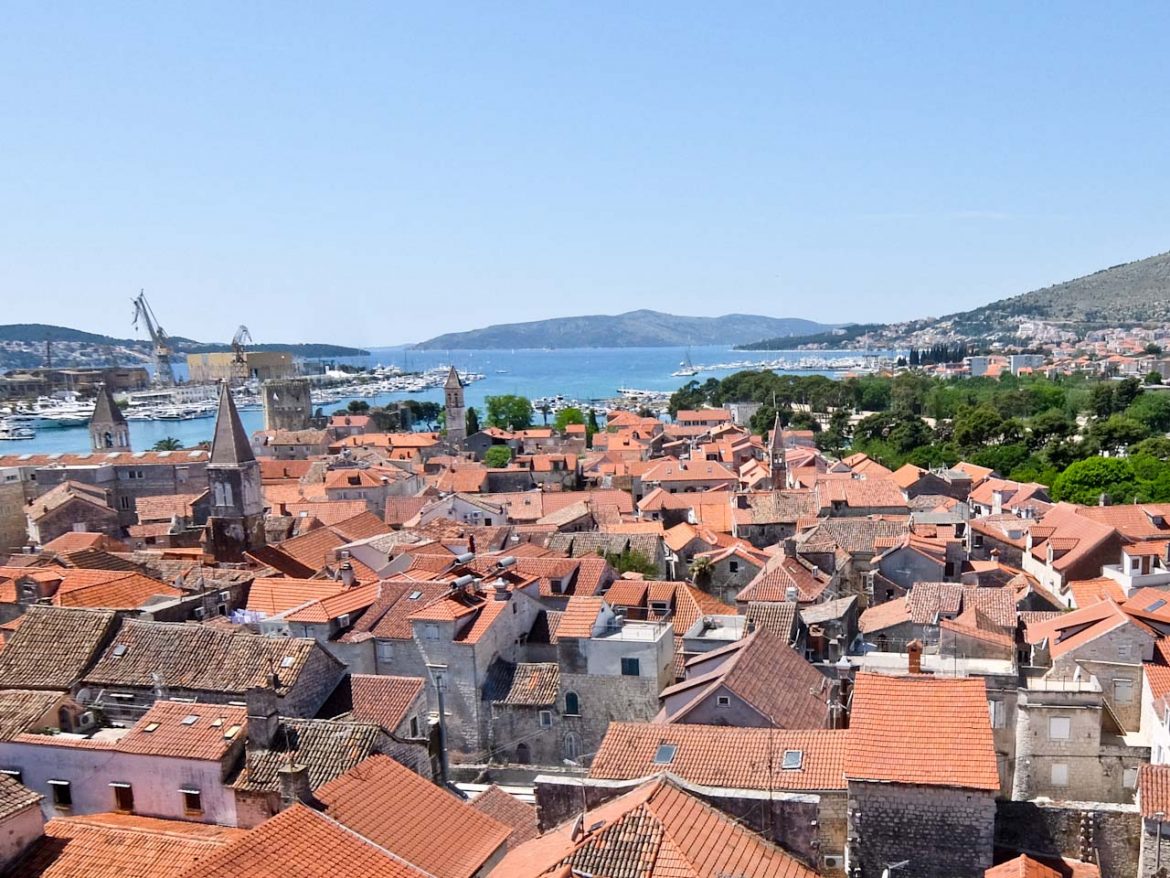 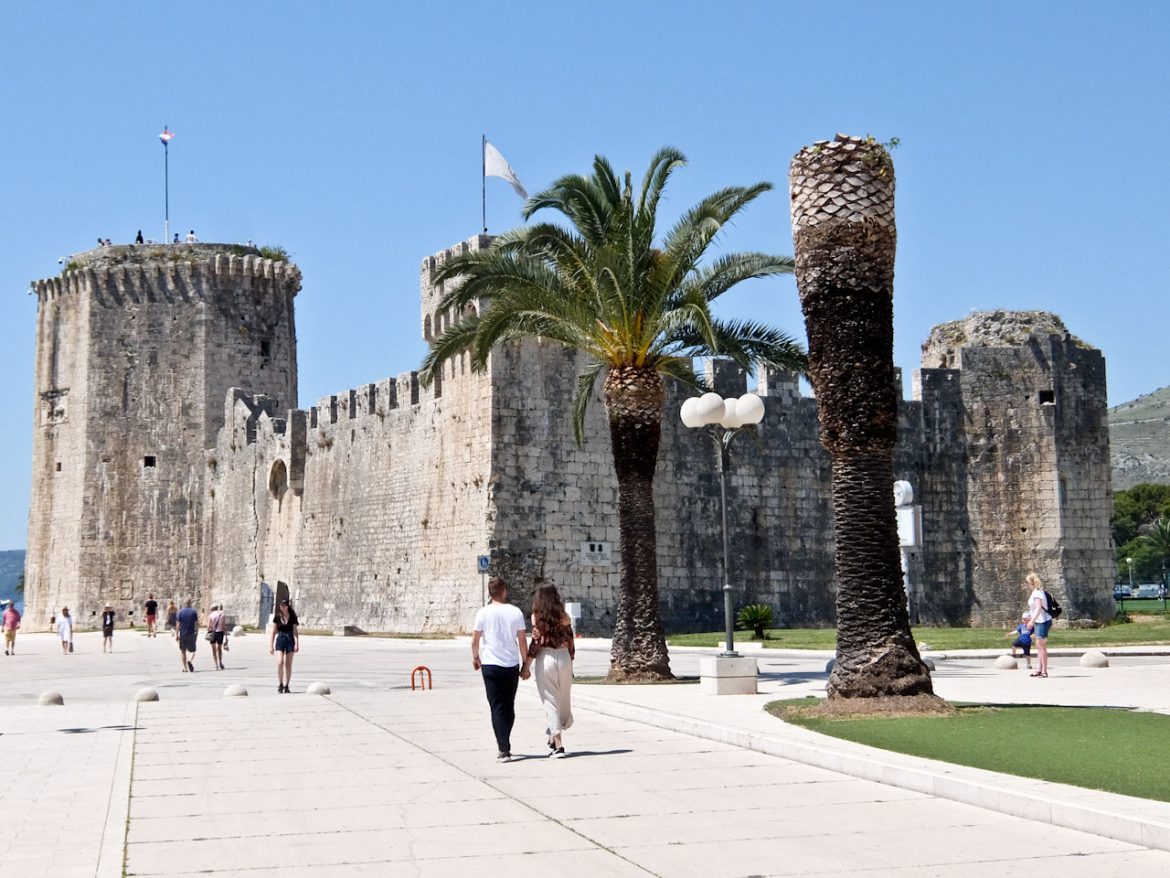 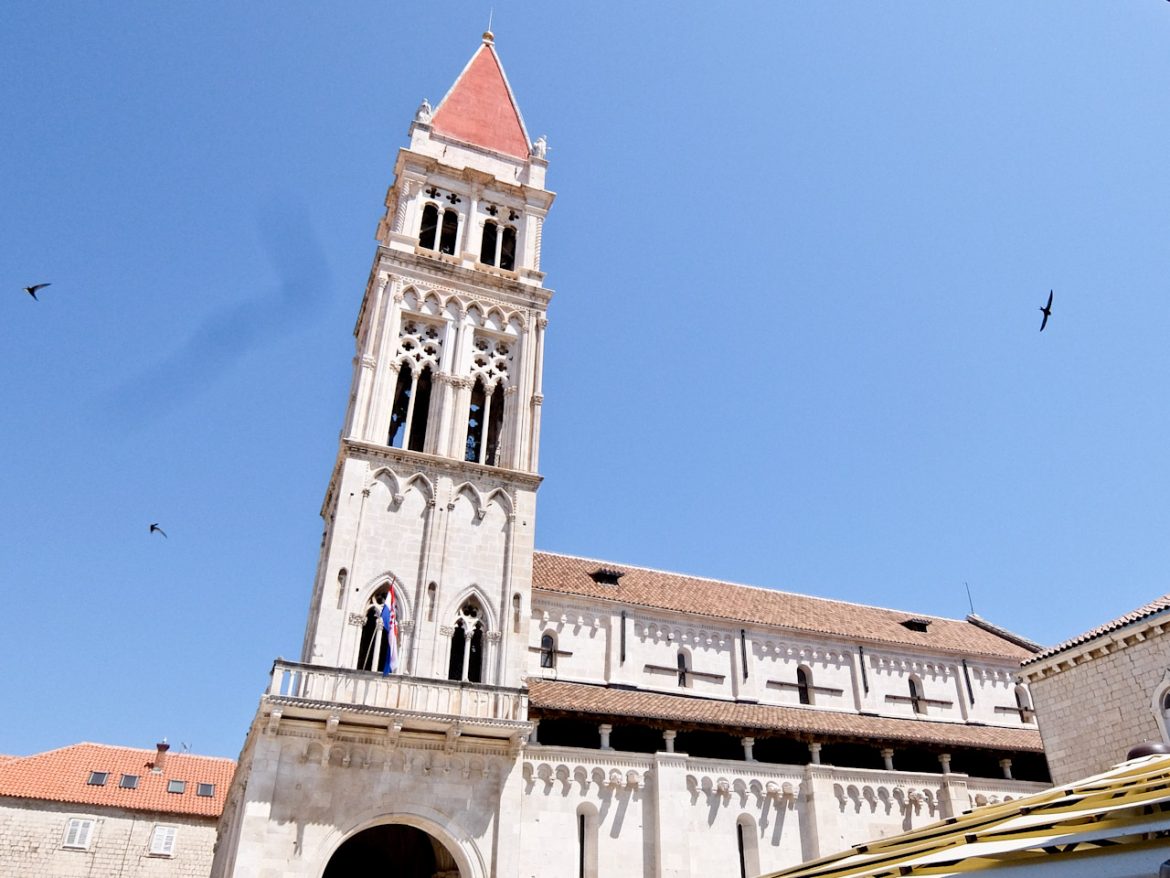 27km from Split, along the coast near the airport, the perfectly preserved medieval town of Trogir is UNESCO world heritage listed. Originally founded by the Greeks in the 3rd century BC, it was taken over by the Romans but flourished under Venetian rule. It sits on an oval island, surrounded by water on all sides, and has maintained a degree of autonomy over the centuries.

The best way of getting here is by a short boat ride from Split.  Inside the walls, a labyrinth of cobbled alleys, crammed with palaces, leads to a central square dominated by the Cathedral of St Lawrence. It was built between the 13th and 15th centuries and it’s worth climbing the bell tower to get an overview of the old town. Opposite is the fifteenth-century town hall, complete with a clock tower and classical columns.

By fast ferry, Hvar is only an hour from Split and the island’s capital is one of the most glamorous of the Adriatic’s historic towns. In medieval times, it was a refuge for pirates until the Venetians took it over in 1240 and these days luxury yachts disgorge the rich and famous. The historic centre is pedestrianised with a long promenade winding around the sea front.

Above the town is the Venetian fortress which offers splendid views over the ancient stone houses around the marina and to the Pakleni islands beyond. Often overlooked is Stari Grad, the original capital, on the north coast. It’s an unassuming little place, with low stone houses clustered around small squares, but none the worse for that. Go here for an authentic taste of local life.