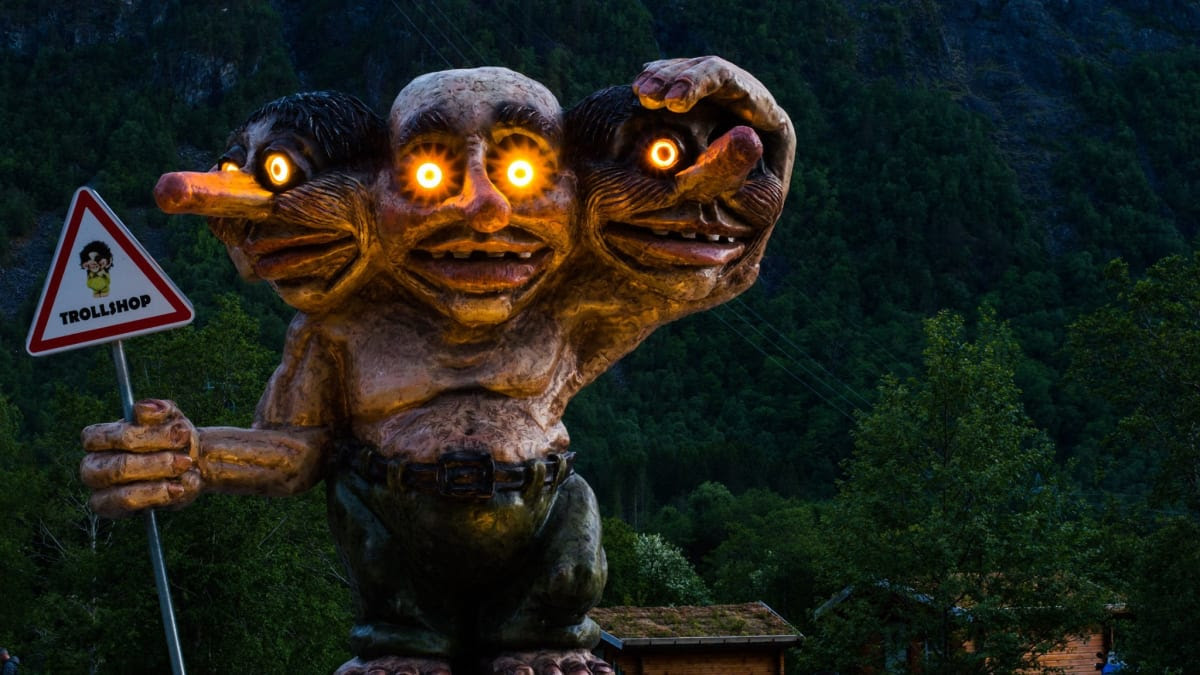 Trolls! Experience the fairytales in Norway

Netflix will release the new movie “Troll”, which takes place in Norway. Deep in the Dovre mountain in Norway, something gigantic wakes up after a thousand years in captivity. The creature destroys everything in its path and quickly approaches Oslo.

Who are these creatures, and where do you meet them? Looking for adventure? Go troll hunting in Norway! Feel the presence of the mythical trolls while exploring stunning rock formations, twisting roads, caves, and cliffs.

One of the most famous Norwegian Scenic Routes, Trollstigen, ‘The Troll Ladder’, is a visual masterpiece. You can really feel the adrenaline pumping on this iconic road! The road twists through eleven hairpin bends as it climbs up to Stigrøra, 858 metres above sea level. Make your way up the mountainside by car, electric bike or hike. Just remember to stop at the Trollstigen platform, with twoviewpoints at the top. The view from here will stay with you forever!

Not far away, the impressive Trollveggen, ‘The Troll Wall’, has Europe’s highest vertical drop, around 1,000 metres. It’s a part of the Trolltindane range, ‘the Troll Peaks’, in Romsdalen in Møre og Romsdal, where the summits tower almost 1,700 meters above the valley. The cliff is a popular destination for professional climbers from all over the world. It’s a very challenging and risky climb. A far easier way to explore the dramatic history of the wall, is through the 14-minute film shown at the Trollveggen Visitor Center, which has been named one of the world’s most beautiful buildings by Architectural Digest.There is also a cafeteria, souvenir shop and a viewing platform towards Trollveggen.

Imagine standing here! At 1,180 meters above sea level, Trolltunga, ‘The Troll tongue’, is sure to give you a fantastic view. But beware, the hike up to Trolltunga is very long and demanding, and not for everyone. Always go with a guide if you are not hiking in summer! Legend has it that Trolltunga was named after a troll that was confident that it wouldn’t turn into a rock after being exposed to the sun.

Sooo… Maybe we should not try to imagine what this troll was doing when he was suddenly exposed to sunlight! Trollpikken, which translates directly as The Troll’s cock, became world-famous when vandals cut the rock formation off during the night. But the Norwegian people soon raised money to return Trollpikken to its former glory. An easy hike of 2.3 kilometres each way will take you to the troll’s most sacred place.

Keep your camera ready for the extremely narrow Trollfjorden, ‘The Troll Fjord’, in Vesterålen in Northern Norway. Winding its way past the 1,000- metre high Trolltinden peak, the three-kilometre-long fjord is just 70 metres wide. The nature here is just asdramatic as the old fairytales! There are daily sightseeing trips from Svolvær in Lofoten, or experience the area on a cruise with Hurtigruten. Look out for the many white-tailed eagles that call the area home.

Trollkyrkja, ‘The Troll church’, is no ordinary church. It consists of three exciting marble and chalk caves, with underground rivers andwaterfalls. The lowest cave is 40 metres long and shaped like an S. Here, you will encounter a beautiful waterfall with a drop of 14 metres straight down to a pool of marble below. If you have more energy to spare, a climb up the beautiful Trolltindan and Stordalstinden mountains, which rise up behind the caves, is recommended. In addition, the beautiful Trolldalsvannene lakes are well worth a visit. You can even take a refreshing dip!

Known for its varied and dramatic scenery, Trollheimen, ‘The home of the trolls’, is full of spectacular mountains. Humans have inhabited this area since the Stone Age, and it is home to a rich cultural heritage. Enjoy excellent hiking and activities including bicycling, fishing, and skiing.

Roughly two hours outside of Oslo you will find Trollfoss, ‘The Troll Waterfall’, which is the highest waterfall in Vestfold. Although only 12 meters high, it’s nonetheless beautiful. Even though the hike only takes 30 minutes, it is a bit steep and might not be for everyone. Troll Museum, Tromsø The Troll Museum in Tromsø is the first and only troll museum in Norway, created using modern Augmented Reality (AR) technology. Here you will get acquainted with Norwegian fairy tales and legends, get hands-on with AR technology, and have a great time exploring Norse folklore. There is fun to be had for everyone – both adults and children, visitors and residents of Tromsø alike.

Troll adventures This one is more of an experience, with several destinations devoted to trolls and other fairytale creatures.Hunderfossen Fairytale Park is packed with rides, adventure, and, of course, trolls! Sure to be a fun troll time for the whole family. Villa Fridheim is one of the biggest and best kept Swiss chalet style houses in Norway. Not only that, its fairytale museum is packet with troll fun! Up for a walk? Wander through Eventyrskogen (the fairytale forest).