If you had a bird’s eye view the Greek-owned Cyclades, they would look like an intriguing mosaic of 20 tufts of verdant earth floating on the turquoise waters of the Aegean sea. It’s an incredible formation created by the geological changes that took place millions of years ago.

According to the Greek mythology, Poseidon, God of the sea, was so furious at the behaviour of the Cyclades nymphs that he turned them into islands.

However they were formed, The Cyclades — which means the Sacred islands around Delos — their beauty and dazzling light can lend itself to a spot of spirituality.

They are at their best in May and still gorgeous throughout the summer months. By September though, life is slowing down and some businesses shut up shop.

Nevertheless, for most of the year the wild rugged volcanic scenery remains whitewashed with sugar cubed Cycladic architecture that looks superb against the dark or vegetal backdrop with the deep blue sea lapping at their shores. Here are six suggestions.

Some say the most beguiling and popular island of this Aegean archipelago is Santorini. Everyone will have seen that iconic image — you know, the one with the cliff-top blue-domed church standing out amid shimmering white architecture that looks dazzling against the blue skies and seas.

Cruise ships stop there, weddings take place there just for the scenic photography and holiday makers clamber over the ramparts of the 13th century castle in an almost cult-like fashion, to be sure of the best view of the sunset.

There are beaches, a pebbly one at Kamari and a black sand ones at Perissa and Karterados and these are overlooked by jagged cliffs and a brilliant light that seems peculiar to the cyclades — it can be mesmerising.

The hillside towns of Fira and Oia are quaint with sometimes steep steps and knotted alleyways and make for idyllic afternoon exploration. And in the evenings the roof terraces of restaurants are light and alive with diners enjoying libations and alfresco dinner in the warm night air.

This island is all about relaxing sophistication. Just ask Angelina Jolie did. She holed up here for a month after filming her second Tomb Raider film.

Bare hills, sandy beaches and a glitzy vibe makes up this 86 square kilometre island. There are barely 10,000 locals yet the island is set upon by tens of thousands of tourists looking to party. Nightclubs are two a penny, there are several pubs and shops stay open throughout the night.

This is a fun island and, naturally, its most famous beach, Paradise Beach, has its share of nightclubs, a campsite, and the odd restaurant. Nearby is Super Parade, a gay nudist beach which may not be to everyone’s taste. For a little peace and quiet, head to Agia Ana, though it may seem comparatively undeveloped.

Its main town, Hóra, is full of fashion shops but as tempting as it is to go shopping, stay away between 10am and 5pm when the cruise ships stop by.

This is the largest of the Greek Islands in the Aegean Sea and when you arrive by boat you will be met with its most famous archaelogical site — the Portara, the doorway to the ancient temple of Apollo built in 522 BC. The island is home to the highest mountain in the Cyclades — Mount Zeus — is the source of much mythology. They say that this was the nuptial isle of the Dionysus, the God of wine. That’s why there is a sanctuary dedicated to him. It’s coastline is a doily of sensational beaches, some secluded. Mikri and Vila in the west are beloved by windsurfers.

Inland its incredibly mountainous and villages seem to appear out of the fertile valleys and there are plenty of fields and olive groves. Its harbour is in the capital where several alleys lead steeply to the citadel, a landmark that can be seen for miles and elsewhere there are old churches, monasteries and Venetian castles and homes.

Paros, a ferry hub and a beautiful Venetian port, is considered as one of the most beautiful islands defined by its beaches and quaint villages. Parikia is the island’s main town and port. Yet its most popular town is Naoussa. It was once an old fishing village but who would know? Today it is a popular cosmopolitan holiday destination. For a little culture visit the blue domed Byzantine Museum.

There may be 365 churches on this island but for young people this is a party island. It offers an intense nightlife and beach parties that start early and last throughout the night on Mylopotas beach are not unusual. This kilometre stretch of beach is peppered with bars and restaurants and myriad of water sports but there are more sedate options at Valmas beach or Kolitsani beach.

The island also has the tranquil hillside village of Chora, probably the most picturesque in all the Cyclades. The views from its highest point are simply breathtaking.

Incidentally, they say that Homer’s mother was from Ios, and he himself was buried there.

You cannot stay the night on Delos but you should visit. This world heritage site, located in the centre of the archipelago, is the birth place of Apollo and Artemis and in ancient times was the religious centre for the whole of Greece. The remarkable monuments, such as the Minoan Fountain and Temple of the Delians, and the impressive mosaics are certainly worthy of the ferry ride. 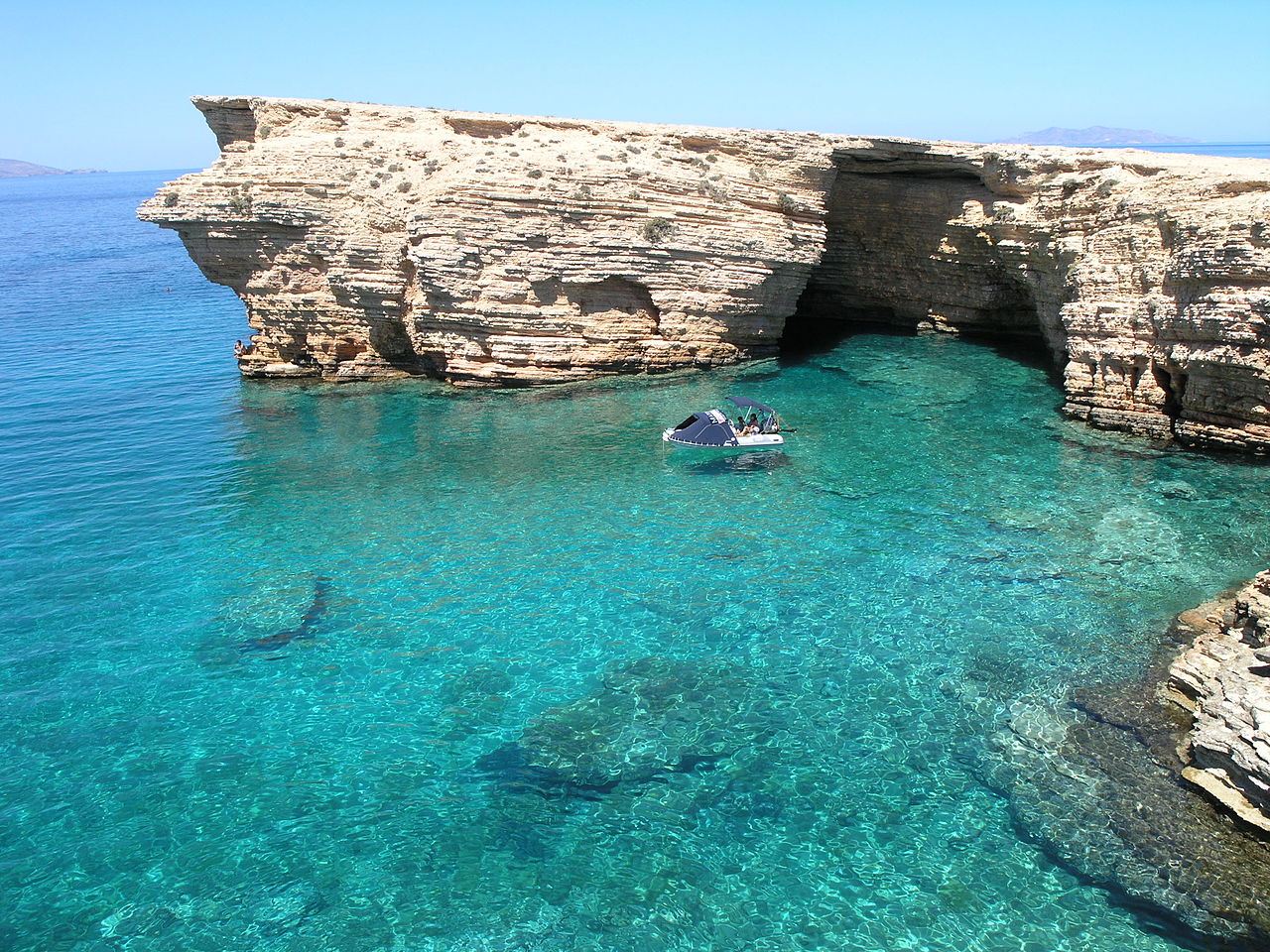