10 Good Reasons to Visit the Isle of Man

Isle of man is a world where time slows down, steam trains puff along the coastline, trams and fairies.

The Isle of Man is a small island in the Irish Sea between the North West Coast of England and Ireland. It is not far from the mainland, a short flight or a ferry crossing (both daily) but once there it has the feeling of having entered another world.

A world where time slows down, steam trains puff along the coastline and trams rattle through small, picturesque villages. The island has its own folklore, superstitions and even a Celtic god of the sea.

There are many reasons to visit this fascinating island and these are my top ten.

Throughout the island, visitors will come across multi-coloured benches and wooden tables with notices inviting them to sit there if they are happy to chat to people they don’t know.

But I discovered that wherever I was on the island people would say hello and this often led to a conversation about the island.

The locals love their island, they know its history and are eager to talk about it. In particular, the bus drivers will help you find your stop and make the right connections. Such a warm welcome really enhances a stay here. 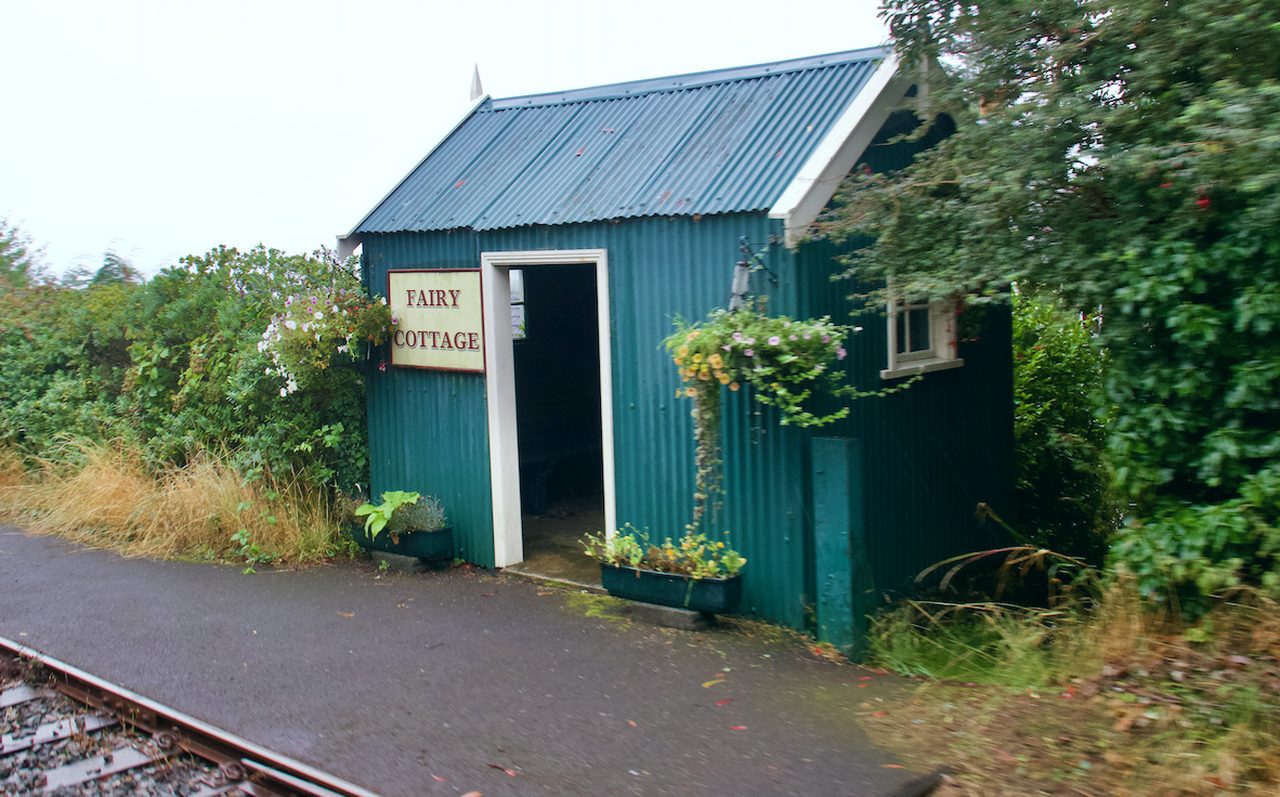 Fairies in gardens, fairy houses in woods the Fairy Bridge and a Fairy Cottage stop on the Manx Electric Railway reflect the beliefs and superstitions of the islanders. There is even an announcement of the Douglas to Castleton bus requesting passengers to observe an Isle of Man tradition and say hello to the fairy as the bus crosses the Fairy Bridge.

Traditionally, the fairies of the Isle of Man are not tiny creatures in pretty dresses with flimsy wings. Known as the Little People or Themselves they are described as very small human beings dressed in blue or green jackets and wearing red hats. They can be good, bad or hard workers and many stories abound regarding their exploits.

The private gardens created by the islanders and populated by the winged variety of fairies are enchanting.

The Isle of Man Steam Railway runs from Douglas to Port Erin at the southernmost tip of the island. It is part of the public transport system so there are regular services throughout the day. Opened in 1873 it is the longest narrow gauge steam line in Britain that still uses its original locomotives and carriages.

As many of the island’s attractions are close to the stations on this railway so it is a great way to explore this area. The Go Explore heritage card offers unlimited travel on all the railways on the island as well as the buses. Special events on this line include a Pie and Mash evening.

Dinner is served on the train as it trundles along between Douglas and Port Erin – main course on the way and dessert on the way back. During the half-hour pause in Port Erin passengers can stroll along the seafront enjoying the lovely view of the coast.

Port Erin is a pretty seaside town at the end of the steam railway line and also well-served by public buses. Its golden sandy beach is sheltered by a peninsula clothed in the trees of the Bradda Glen.

The island has seventeen glens that offer beautiful walks through woods and by water.  Bradda Glen is one of the most accessible and beyond the glen, at the end of the peninsula, is Milner’s Tower. A memorial to a man who was responsible for many good works on the island. This little town also features the renowned Erin Arts Centre and a fascinating railway museum that narrates the history of the railway including some of the original lines that no longer exist. A lovely day out.

The Manx Electric Railway (MER and often referred to as the tram) is also part of the public transport system and runs from Douglas to Ramsey. This line was opened in 1893 and has 71 stations, stops and halts. Passengers boarding the tram at the termini in Douglas or Ramsey have to designate their stop and those wishing to board en route have to flag it down. It is a lovely way to travel, especially in the large, open carriage. One of the most popular stops on this line is Laxey, the terminus for the Snaefell Mountain Railway.

The Isle of Man has one mountain, Snaefell (Snow Mountain) and visitors wanting to take the easy way to reach the peak can ride on the one-carriage Snaefell Mountain Railway. This little railway was opened in 1895 and has just 3 stops. As it trundles up the mountain passengers will get good views of the Great Laxey Waterwheel, the site of the Great Snaefell Mine disaster in the Laxey and the Sulby reservoir. There is a café at the top and, on a clear day, splendid views of the island below.

An interesting commentary on the way down explains the braking system used on this line. Comforting for any passengers who may have visions of the tram careering down the steep slope out of control.

The Great Laxey Mine

Mining is an important aspect of the Isle of Man’s industrial heritage and its most important mine, the old mineral mine at Laxey has been developed into an interesting tourist attraction. The site is a short walk from the tram station.

But on Saturdays, during the summer, the Great Laxey Mine Railway, a miniature railway, operates between the Valley Gardens, site of the mine’s washing floors, and the yard terminus. This private railway is run by volunteers (but is included in the Go Explore heritage card). The unique line runs through the only tunnel on the island which is why the steam locomotives, Ant and Bee, replicas of the originals, are so small.

At the end of the line, it is a short walk to the Great Laxey Waterwheel. The largest operational waterwheel in the world. Visitors can climb to the top of the wheel to see the views of the surrounding countryside and also follow the Mine Trail to see the old mine buildings and experience a short walk into an old mine shaft.

The station for the Groudle Glen Railway lies at the bottom of the Groudle Glen. This glen was created by a previous owner and features a pretty waterwheel that fed the hotel that once occupied this valley. This miniature railway is also a private concern and run by enthusiastic volunteers operating mainly on Sundays during the summer. It too, is included on the Go Explore heritage card and passengers ride in small wooden carriages to the end of the line, a promontory on the cliffs. Here they can enjoy coffee and cake at the Sea Lion Rocks Tea Rooms, also part of the project and run by volunteers. The name of the café and most of the steam locomotives are a throw-back to the zoo that once occupied the site.

House of Manannan in Peel

The House of Manannan defies a simple description which makes it so unusual. It occupies two floors in a large old building on the quay in Peel. The theme is a journey through the island’ past guided by Manannan, a mythological sea god of the Isle of Man. Artefacts and set pieces are part of this journey. 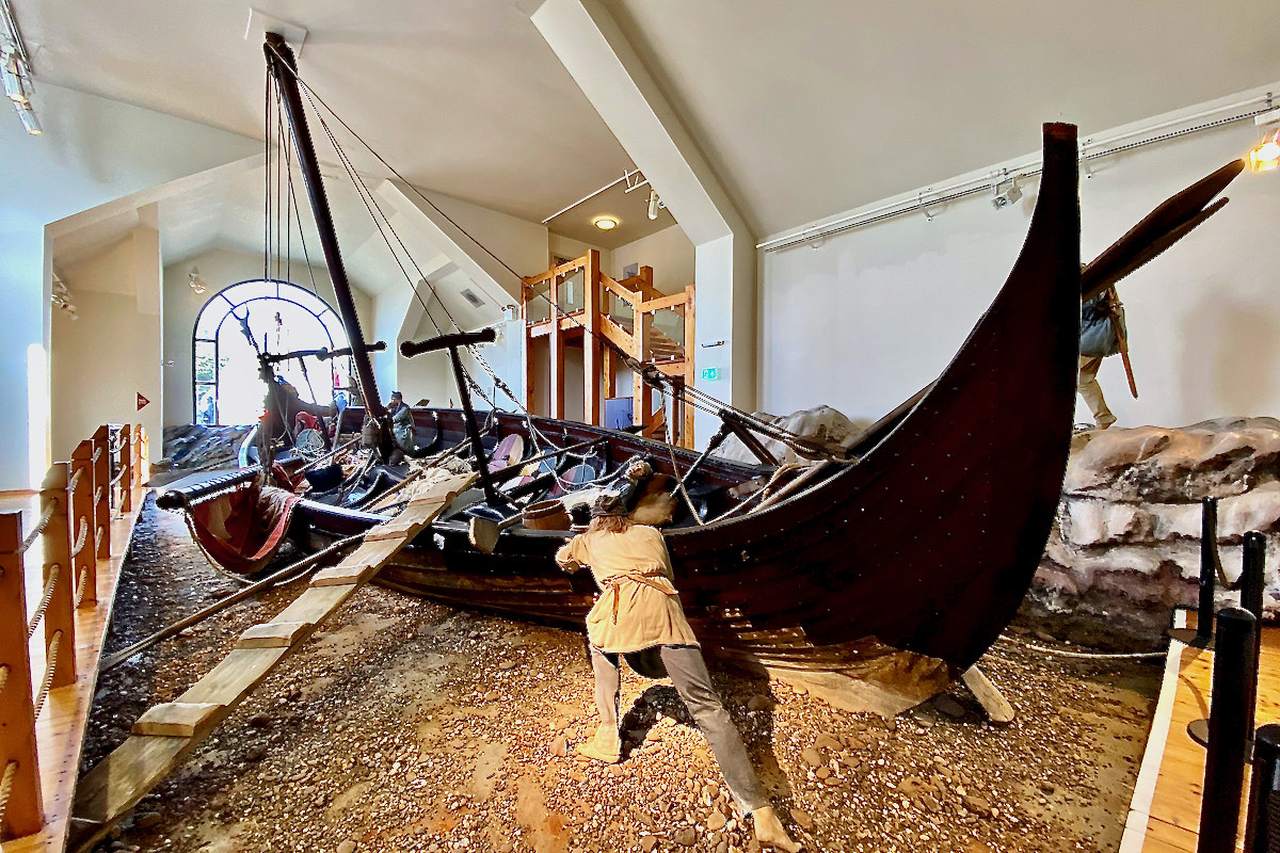 But pride of place must go to a full-size replica of the Viking ship Odin’s Raven cleverly linked by ropes to a sculpture outside the building. Visitors should allow plenty of time to appreciate the details of this incredible exposition.

Castletown is the ancient capital of the Isle of Man and kings and lords of the islands have lived in its castle, Castle Rushen, over the centuries. A Norse king built the castle around 1200 AD. Today it is one of the best-preserved medieval castles in the world despite the many different uses it has been put to over the years. After climbing the spiral staircase to the top visitors can take in different aspects of the views below from the four turrets on the roof. The rooms inside the castle have tableaux that reflect the uses of those rooms when the castle was a royal residence. Videos and recordings recall the experiences of previous residents.

PS: Don’t leave with trying the Manx queenies. The traditional dish combines scallops with bacon, peas and garlic in a sauce – delicious. And don’t forget the Manx kippers.