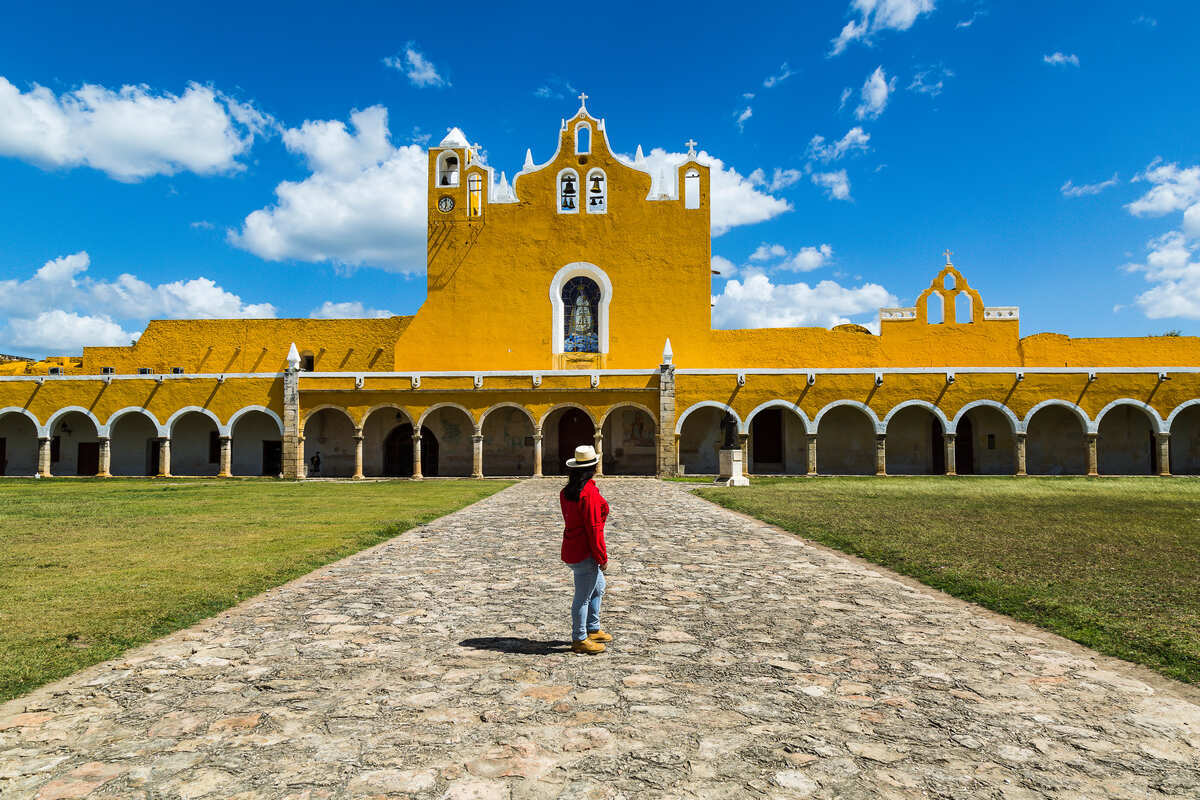 Expectations are high for the official launch of the Maya Train in 2023, the new scenic journey that will take travelers on a loop around Mexico’s famous Yucatan Peninsula. Not only will connectivity increase in the region, but tourists staying in Cancun will also be able to explore four incredible new destinations once the works are complete.

The promising tourist train is set to make Cancun more popular than ever as the gateway into the wider Maya World, seeing that, prior to its implementation, all public transportation in the area consisted of smaller inter-municipal buses or private transfers. In other words, getting from A to B in Yucatan can be tricky unless you’re driving.

Consequently, several quaint towns inland remained virtually off-limits to visitors basing themselves on the coast – but that is finally about to change:

The Maya Train is one of Mexico’s largest infrastructure projects of the last decades. Designed to connect the Riviera Maya’s top hubs, namely Cancun and Tulum, while serving lesser-known places that had previously been largely overlooked as tourist destinations, the train will place Mexico at the forefront of the rail revival in the Americas.

So far, there are 21 planned stops at a total length of 1.554 km. As you might have guessed, in reality, there are countless gems to be discovered, and we’re happy to spend the next few years traveling the whole extent of this Mayan express, but based on the map made available by Ineco, our hearts are already set on the following:

Also Known As The Yellow City

Distance from Cancun Station: 4 stops on the Cancun-Izamal line

Izamal is a 15,000-people-strong city in the state of Yucatan, named after the peninsula itself. On the rail map, trains will call here just before the regional capital of Merida, as it is located only 45 miles east of the larger urban center, but visitors heading that way will want to hop off the train sooner to check out this photogenic colonial gem.

Nicknamed the ‘Yellow City’, Izamal has a distinct yellow-tinged architecture dating back to the early 19th century. As it has always been more difficult to reach, it is relatively unspoiled by tourism compared to other settlements nearby, even though it has made UNESCO’s tentative list of Heritage Sites.

As a small city, Izamal is pretty walkable and can be seen in its entirety in a single day, whether you choose to stay overnight to truly savor the atmosphere or you’re simply taking a day trip there from Cancun. That’s the beauty of the Tren Maya: places like these will be a short two to three-hour train ride away once the lines are up and running.

Top attractions in the area include:

For Mayan Heritage And Nature Reserves

Distance from Cancun Station: 4 stops on the Cancun-Tulum and Tulum-Chetumal lines

Branded as the ‘real Mexico’, Felipe Carrillo Puerto is bound to become of Izamal’s strongest competitors in the Colonial City category following the opening of the Tulum-Chetumal section. Much like Izamal, it is four stops away from Cancun, except the rail line meanders south instead, calling at the beaches of Puerto Morelos and Playa del Carmen along the way.

Named after the politician who helped settle the historical dispute between the Yucatan Mayan peoples and the Mexican Government, this community sits on the boundaries of Sian Ka’an – in Mayan, ‘where the sky is born‘. A major biosphere reserve dotted with Mayan ruins, it attracts both wildlife seekers and History enthusiasts.

The reserve will, naturally, be the main reason why visitors head this way, but the municipality itself is famous for its welcoming locals, an enviable collection of Colonial-style, vibrant-colored churches, ethnic cuisine paying homage to the region’s rich Amerindian past, and craft shops where day trippers will find authentic souvenirs to bring back home.

When visiting Felipe Carrillo Puerto, make sure you give yourself enough time to tick off all the below:

The Entrance To The Mystical Mayan Underworld

Distance from Cancun Station: 1 stop on the Cancun-Izamal line

Like the previous two entries on this list, Nuevo Xcan is a quaint Mayan community of only 1,088 inhabitants known for holding the key to the Mayan underworld. Most notably, crystal clear water cenotes that are considered sacred by the indigenous population and are highly sought after for swimming during the high season.

Cenotes are natural sinkholes located underground that were once used by the Mayan civilization as both a water source and sacrificial altars. Most of them are now open for swimming and visitation, though arranging a visit well in advance is advised as crowding could get a bit much, especially now that the Riviera Maya is shattering arrival records every month.

It’s true that some cenotes in Mexico have seen contamination rates climb lately, but the good news is none of the bodies of water surrounding Nuevo Xcan have been affected. Offering more of a nature escape, the town doesn’t have any particular landmarks worth mentioning except its traditional palapa-roof houses, but there is a searing natural beauty in the surrounding area.

Visiting from Cancun, don’t forget to:

The Tulum Of The South

Distance from Cancun Station: 5 sops on the Cancun-Tulum and Tulum-Chetumal lines

You might have vaguely heard of it, but in case you haven’t, Bacalar has developed a solid reputation as the ‘Southern Tulum’. Located near the border with Belize, it hosts a comparable range of boutique hotels specializing in luxury services, which started gaining traction due to the city’s quietness and swimming areas that are not as crowded.

It may not have direct access to the coast, as it is separated from Chetumal Bay by a strip of land, but this definitely does not mean sunseekers should rule it out: Bacalar is cozily nestled on the shores of Lake Bacalar, aptly titled Lagoon of Seven Colors due to the various shades of blue found along its 30 miles of extension.

Unlike Tulum, where excessive development has arguably become a problem, bringing into question its authenticity as a Mayan destination, Bacalar’s true potential is still to be unleashed, though judging by its rising TikTok popularity, it shouldn’t be long until Americans are flocking into this Yucatan hotspot as well.

It’s best to get there as soon as the train hits the tracks, then:

The Tren Maya launches in 2023, and we have been covering all updates relating to this new attraction on this link.