If you’re looking for something Africa-related to read, maybe we can help. We wondered which books have inspired or intrigued some of the writers who have contributed to Travel Africa. We’re grateful to all who sent their recommendations: it’s a really varied selection, a mix of well-known and obscure, but all have made an impact. Here’s the first of what will likely be three or four lists, which we will share with you over the coming months.

The Sheltering Desert, by Henno Martin.

“It seems relevant in these times as Henno and Hermann go into self-imposed exile in the Namib Desert at the outbreak of the 2nd World War. You can still visit most of the places they live and visit in the book – and planning a Sheltering Desert tour could be a fun way to spend the next weeks or months.”
Recommended by Aulden Harlech-Jones (visitnamibia.net)

“Travel books that get deep into the heart of a culture can often plod along or feel rose-tinted but I still get a tingling sensation reading Tim Butcher’s jet-propelled visceral thriller about Africa’s most unpredictable country, Democratic Republic of Congo, in his marvellous Blood River”.
Recommended by Mark Stratton (www.markstrattontravels.com)

Heart of Darkness, by Joseph Conrad

“This may be a cliché, but Heart of Darkness by Joseph Conrad is my constant go-to book about Africa. Although fictional, this novella is an actual account of the author’s time as a steamboat skipper during the horrors of the early colonial era on the Congo River. The story is timeless as the horrors and latent colonialism still resonate throughout much of the region, but most of all it is written with such mastery and skill that it is easily one of the greatest books ever written. It certainly inspired me to write about Africa’s natural landscapes and wildlife as a journalist, while as an author, my three books have tried to evoke the spirit of African adventure travel, history and lost legends.”
Recommended by Adam Cruise (www.elephantjournal.com)

“Ever since I read Joseph Conrad’s Heart of Darkness as a teenager, I have been fascinated by the Congo, so this book—in which the author retraces Stanley’s famous journey down the Congo River—was always going to appeal. The irony that the DRC has had one of the world’s richest supplies of raw materials for decades, yet remains one of the world’s poorest countries, is an undeniably depressing thought which can only partly be explained by a spectacularly cruel period of colonialism. However, if you can look past the poverty, lawlessness and lack of development, the DRC also contains some of the few true wildernesses left in the world where travelling is still akin to exploring. Consequently, this tale should hold sufficient allure to captivate any armchair adventurer.”
Recommended by James Gifford (www.jamesgifford.co.uk)

The Dark Side of the Kalahari, by Hannes Lochner

“Hannes Lochner’s photographic essay reveals the nocturnal world of our all-time favourite African location, a world few of us are lucky to see. Starring role in the story goes to a female leopard, Luna, and her struggle to raise a cub in this harsh environment. It’s a book that sometimes shakes off the shackles of conventional photographic technique in favour of impressionism, mood and ambience, and breathes passion and love for the Kalahari; something we totally get.”
Recommended by Steve and Ann Toon (www.toonwildlife.com)

Running with the Kenyans, by Adharanand Finn

“Shortlisted for the William Hill Sports Book of the Year Award, Running with the Kenyans investigates why the Kenyans are such good runners—the author moves himself and his family to Iten (ground zero for world athletic excellence) to try to figure out why the country pumps out so many elite distance runners. I loved this book as not only do I love running, but it’s a celebration of African excellence, a real human story and a wonderful evocation of life in a sleepy backwater town that’s become the unlikely centre of world-class sport.”
Recommended by Sarah Baxter (www.sarahbtravel.wordpress.com)

The Sacred Combe, by Simon Barnes

“This lyrical prose poem to nature, by the renowned ‘bad birdwatcher’ and sportswriter, combines the best nature writing with a kind of accessible-to-all philosophy. His lifelong love affair with Zambia’s Luangwa Valley is the leaping-off point for ruminations on biophilia, rhino conservation, Tolkien, twitchers and the beauty of cranes—but though Africa is at its heart, his key thesis is that a ‘sacred combe’, where you reconnect with nature, can be wherever you look for it. Reading this book inspired a longing to be back among the puku, leopards and elephant shrews of Africa—but also to wander my local footpaths, admiring Britain’s tamer but no less wondrous wildlife with fresh eyes.”
Recommended by Paul Bloomfield (www.paul-bloomfield.com)

1000 Tales of Johannesburg, by Harry Kalmer

This unassuming novel provides a greater understanding (even for me, a lifetime resident of Johannesburg) of the myriad influences and cultures that have flocked to South Africa’s melting-pot (or perhaps potjie pot is better) capital. Narrated against the backdrop of the 2008 xenophobic outbreaks, the tale of a returning South African architect highlights the irony of attacks against ‘aliens’ in a city created by the blood, sweat and careers of migrant workers.
Recommended by Melanie van Zyl (www.melanievanzyl.com)

The Green Hills of Africa, by Ernest Hemingway

“This is embarrassing to say as a black man, but very few people have written about the plains of wild Africa better than Ernest Hemingway. I have read his book The Green Hills of Africa three times. He brings the acacia trees and the African skies and the smell of the anthills alive. The darkness of the African plains will never be the same. Neither will be the sunsets. I live in Africa, have all my life, but reading about Africa from Hemingway made me fall in love with this continent all over again. It also made me sad that we don’t appreciate this continent as much as we should. That we don’t tell others more what a gem we have here. That it takes a white man from faraway hills and rivers to make us fall in love with what I see whenever I open my window. Read this book. It stirs something primal in you. You want to get out of the house and rub a stick together and make a fire.”
Recommended by Jackson Biko (bikozulu.co.ke)

Circles in a Forest, by Dalene Matthee

“I never go on a trip without field guides for birds, mammals, frogs, snakes, butterflies and trees, which at least for southern Africa now come in convenient App form. As for general reading, I finally had a chance to sit down with Dalene Matthee’s Circles in a Forest over the December holidays. It’s required reading for many school kids across South Africa, but I’d never read it before. I was amazed at how well it evokes the history of the people, elephants and other wildlife and forests of the southern coast around Knysna, but more so how much it resonates with current challenges to conserve dwindling wild places against the momentum of consumptive cultural norms. It’s a beautiful and inspiring read.”
Recommended by Morgan Trimble (www.morgantrimble.com)

“This guidebook was first published in 1970 and I was given the second edition as a birthday present in 1995 when I started working as a tour guide in South Africa. I read this excellent 900-page guide cover to cover and kept on referring to it for years to come. Although totally out of date, the book has a wealth of background information on just about every little backwater in South Africa.
Recommended by Ariadne van Zandbergen (www.africaimagelibrary.com)

In Ethiopia with a Mule, by Dervla Murphy

“Dervla Murphy, a doughy Irishwoman, sets off on a three-month trek across the Ethiopian Highlands in the 1960s with Jock, a mule named after her publisher, as her only constant companion. Her account is thoroughly straightforward and honest—she sleeps where she stops, complains constantly about a troublesome knee injury and, later, a troublesome mule, and falls prey not once but thrice to armed robbers. Her journey defines what I think travel means to me: casting oneself adrift in a foreign land and surrendering to the kindness of others.”
Recommended by Catrina Stewart (www.clippings.me/cstewart)

Recipes for Love and Murder, by Sally Andrews

A modern-day detective series that uses my ideal trifecta of tenderness, recipes and character to track down bad guys. Tannia Maria is the Karoo’s equivalent of Botswana’s Mma Ramotswe, from The No.1 Ladies Detective Agency fame. Letters penned to the curvy community agony aunt illustrate the idiosyncrasy of the Rainbow Nation’s remote outposts and shines a light on the hardships faced across the country. The stories make for easy, but memorable, reading and are sure to inspire a hankering for homecooked farm feasts.
Recommended by Melanie van Zyl (www.melanievanzyl.com)

The great English satirical novelist Evelyn Waugh had a long-running fascination with Africa. The continent provides the setting for two of his finest works—Scoop and Black Mischief—while his first-hand account of the 1935 Italian invasion of Ethiopia, Waugh in Abyssinia, remains a classic. Less well known but still hugely enjoyable, Remote People describes Waugh’s extended African journey of 1930, laced with his characterically acerbic wit and politically incorrect portraits of human absurdity (the scene where he’s chucked off a river boat in the Congo for refusing to pay duties on a non-existent motorbike is particularly memorable). Still one of the funniest travel books ever written.
Recommended by Gavin Thomas (gavinthomas.wordpress.com)

I did this book as a set book in high school, way back when, and I can still recite the opening sentence. If there is a masterpiece in African literature, then this book takes the cake.
Recommended by Josaya Wasonga 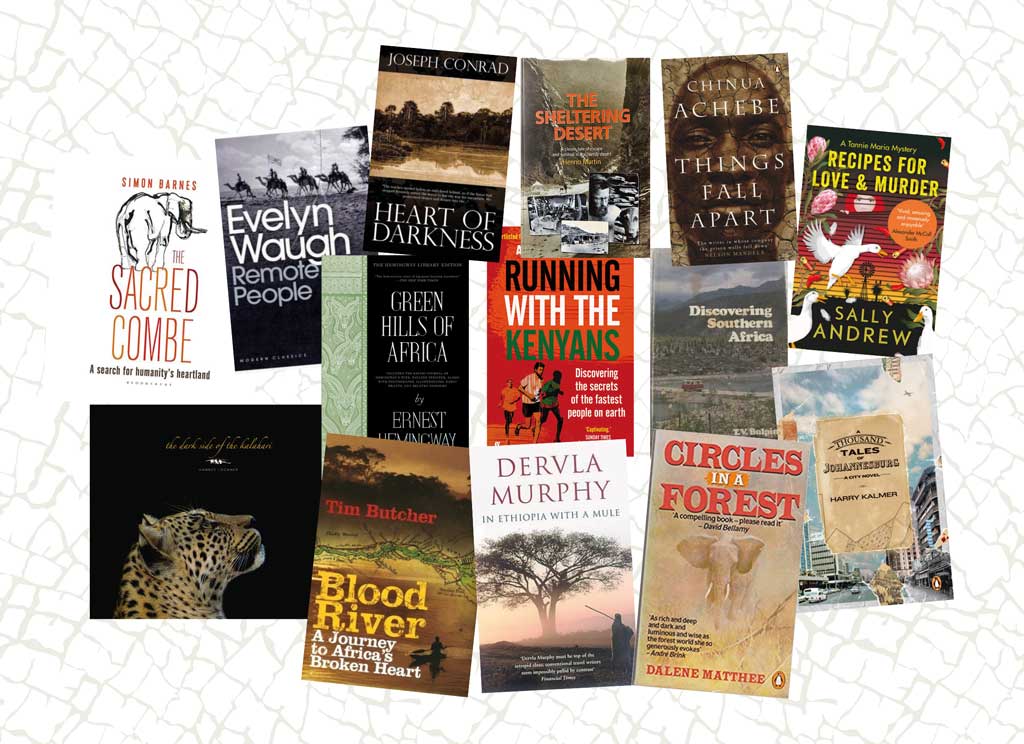 Croatia puts in place measures to stop the spread of COVID-19 along its Adriatic coast.