In 2014 the Okavango Delta became the 1000th World Heritage site – and not before time. This vast, varied, wildlife-abundant wetland is matchless, and long overdue protection. Here, we look at the background to the Delta’s designation, and celebrate its many wonders, beginning with James Gifford’s journey through the ebb and flow of the Okavango’s seasons.

April sun
The water droplets trickling from the two-metre ngashe back into the channel played a hypnotic rhythm. It was the only manmade sound in this natural bubble of serenity, occasionally punctured by the chirping call of an African jacana, carelessly dashing across the water’s surface in a gravity-defying illusion worthy of David Copperfield.

The April sun was still preparing for its grand entrance as my guide wielded the long pole to propel us through perfectly reflected papyrus tunnels towards a floating field of white and gold lilies. A thin layer of mist hovered above the water – the first hint of the coming winter – creating a hauntingly beautiful scene in the bluish half-light.

Stress and tension slid from my shoulders. This would be my world for the next two days, camping on a deserted island at night. I lay back with a smile: adapting to the tortoise-paced way of life was surprisingly easy. For most travellers a mokoro trip is a brief two-hour respite from the conveyor belt of lodge gamedrives and predator searches. But to really appreciate the local Bayei people’s preferred mode of transport requires a more adventurous approach. In the Okavango Panhandle, far from the busier lodges further south, I drifted past villagers who live among wildlife in the same way as their ancestors have done for hundreds of years.

The only hint of the 21st century lay in the material of my craft, for fibreglass has replaced wood in a conservation strategy to ensure the future of the mangosteen, jackalberry and sausage trees that line the river banks. In addition, my skilful poler would point out fingernail-sized reed frogs rather than the hunting hippos – an astounding feat in these rather precarious vessels. This was not a trip for Big Five list-tickers, but it was a sublime form of time-travel, which gently yet utterly immersed me in the spirit of the Delta.

Two months earlier the water supporting me now would have been suspended in clouds almost 1000km away, waiting to be deposited onto the Angolan highlands, then merging to form the Cubango River before finally entering Botswana as the Okavango. Over the next few months it would disperse into thousands of rivulets coursing through the Kalahari sands, spreading life wherever it went.

August nights
Four months later I found myself once again in the heart of the Delta, just outside Moremi Game Reserve. It was August and the lush vegetation had long since lost its emerald hue, replaced now by shades of ochre and amber. There was a palpable drop in temperature as soon as the vehicle started to move; I instinctively tightened my scarf. The moonless night air felt dense and I quickly became disorientated by the impenetrable blackness that surrounded us.

We arrived at a deep water-crossing – the head of the flood had passed through here a month or so ago but many of the roads still remained a metre under water. Waves washed over the wheel arches as our headlights dazzled a thousand insects dancing to the harmonies of an orchestra of bullfrogs, reed frogs and guttural toads. Off-limits inside the national parks but possible in private concessions, night drives typically reveal smaller nocturnal creatures – barn owls, bushbabies and scurrying civets – but tonight would offer something a little bit special. After a painstaking hour tracking our quarry we found a pride of nine lions on the move. Even as we drove among them they remained oblivious to our presence, striding with purpose either side of our vehicle, searching for the scent that would initiate nature’s primal hunting mechanism. For a brief moment it felt as if we had been accepted into the pride. It was a rare connection.

Without warning, our guide switched off the lights and we plunged into darkness. I felt a tingle on the back of my neck – an innate self-preservation warning, perhaps – as the woeful inadequacy of my underdeveloped senses became unnervingly apparent. I could see nothing except the blanket of stars above my head; my ears could detect only the sound of my own breath; my pitiful olfactory sensors barely registered the remnants of diesel fumes, which the felines would have sensed from afar. By the time the guide shone his spotlight again, the whole pride had moved noiselessly past us, slowly melting into the mopane shadows ahead.

December rain
It was December when I made my final trip of the year to the Delta and the first rains from a few weeks before had already started to soften the baked clay underfoot. I trod carefully, trying unsuccessfully to avoid the crackling twigs as I weaved between towering leadwoods. The treeline suddenly disappeared and I looked up, as the sweet earthy smell of the morning’s rain wafted across an open floodplain. Up ahead, a carmine bee-eater flitted among the resurgent grasses, hungrily snapping at grasshoppers, while a parade of yellow-billed storks spiralled above in a perfectly choreographed aerial display.

A raised hand stopped me in my tracks. The sound of munching jaws became audible over my barely-held breath. Instantly I became acutely aware of my vulnerability – without the protective shield of a vehicle, I would probably win the dubious accolade of weakest, slowest and least-aware animal naive enough to roam around the bush. Despite this (or perhaps, because of it), I had never felt more alive. As I tried to calm my pulsating heart, I realised there was nowhere in the world that I would rather be. With a fistful of tossed grass, my guide silently tested the wind direction and we circled round to watch one of Botswana’s 150,000 elephants from a safer distance.

The sheer range of experiences on offer in the perpetually evolving Okavango is possibly one of its most underrated attributes. For density of animals and predator sightings, the peak winter months with their sparse vegetation and fewer water sources understandably attract the bulk of Botswana’s tourists. But venture off the beaten track, strike out on foot or dare to come at a different time of year, and you will be rewarded with intimate encounters that will surprise, amaze and change your perception of the world’s greatest inland delta forever. 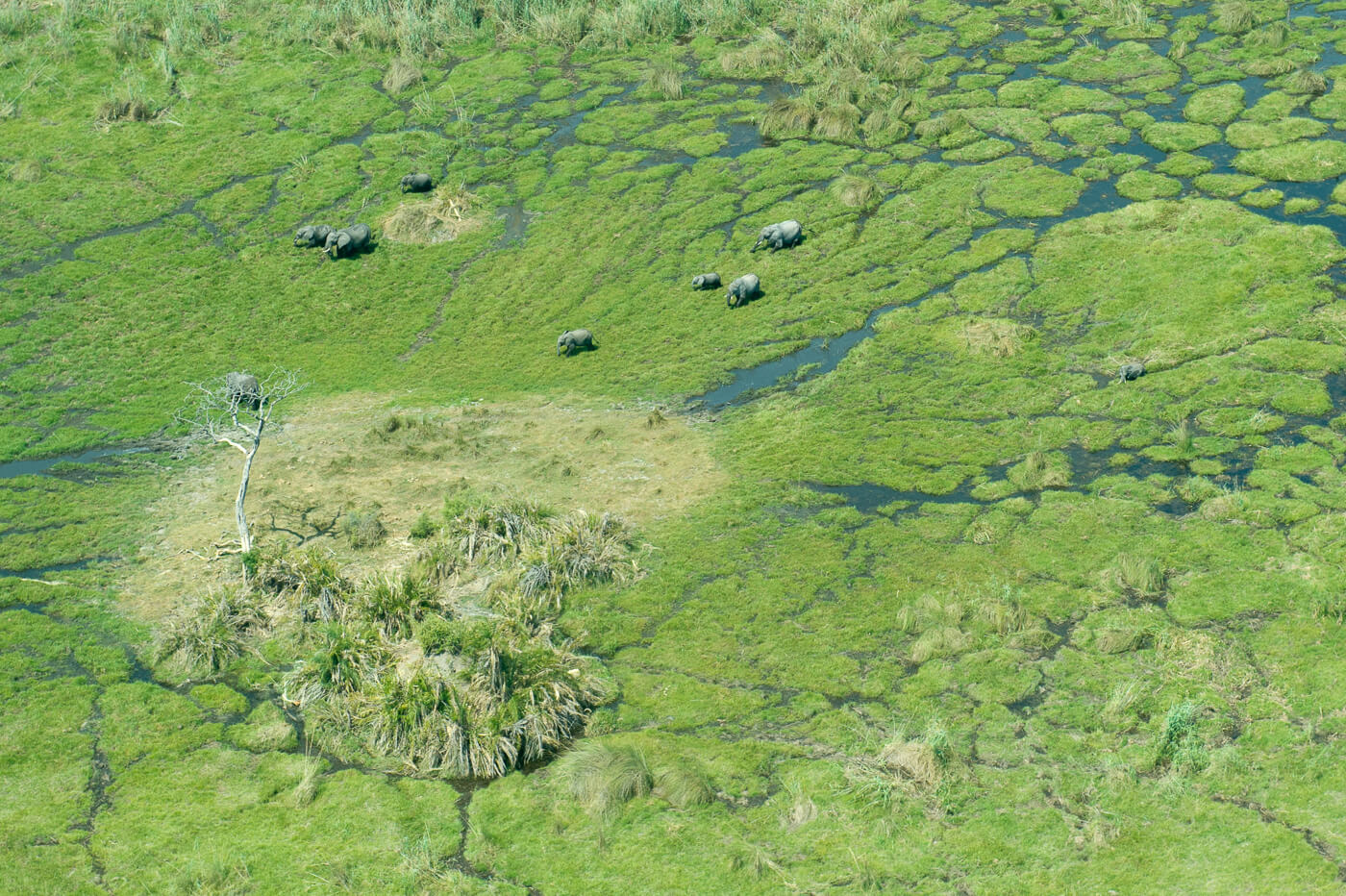 Top 30 places to visit in the world