Yip, yip, yip! It was a jackal that announced my very first leopard sighting. Two jackals, to be precise. I was sitting in the darkness of Nyamandhlovu viewing platform in Hwange National Park, Zimbabwe, watching the moonlit waterhole, when a slinky, feline silhouette approached to drink. Two smaller, dog-like silhouettes trotted close behind, as though playing grandmother’s footsteps. They yipped insistently as they tailed the big cat.

I was reminded of this incident last year during a night-drive in Tanzania’s Ruaha National Park. Rounding a bend, we met a large male lion, lying down and roaring into the darkness. Behind him stood a black-backed jackal (the same species I’d seen in Hwange), so close that it had to dodge the swishing tail. The proximity seemed suicidal. Was this some kind of dare? What if the lion turned around?

Both these images seemed to come straight from the pages of The Jungle Book, in which Tabaqui the jackal trots along behind Sher Khan the tiger. “Out!” exclaims the indignant wolf, when Tabaqui approaches his den. “Out and hunt with thy master.” The implication is clear: the jackal is a parasite, a sycophant, a mischief-making “dish-licker”. And Kipling was not the first to depict India’s jackals in this way. “One day life of a lion is better than a hundred years life of a jackal,” proclaimed Tipu Sultan, the great Muslim ruler.

Today, this image still clings to jackals. As a safari sighting, they enjoy none of the kudos of big cats, wild dogs (their canine relatives) or even much-disparaged hyenas. I’ve even heard a guide report ‘nothing about’ over the radio, while staring right at one. But, as with most prejudices, our antipathy is born of ignorance. Learn more about these fascinating animals — and spend some time watching their fascinating antics — and they will soon command your attention.

Which jackal?
First up, what exactly are jackals? Science (and the evidence of our own eyes) tells us that these medium-sized carnivores are dogs. And they do indeed belong to the family Canidae, sitting in the genus Canis alongside wolves, coyotes and our own domestic dogs. Taxonomists today recognise three species. Two — the black-backed jackal (Canis mesomelas) and side-striped jackal (Canis adustus) — occur in Africa; a third, the golden or Eurasian jackal (Canis aureus), occurs across Eastern Europe and southern Asia.

Of Africa’s two jackals, the better-known is the black-backed. Fox-like, with a slender body, long legs and large ears, its rufous to tan coat is set off by a silver-streaked saddle along the dark back, which is demarcated from the underparts by a black flank stripe.

The side-striped is, on average, a little larger (6.5–14kg as opposed to 6–13kg), with a greyer pelt. In a reversal of its cousin’s markings, its flanks bear a pale stripe — sometimes very indistinct — and its tail is tipped with white, rather than black.

The species also have different distributions. The black-backed occurs in two distinct ranges, 900km apart: in southern Africa, it ranges from the Cape across South Africa and up into Namibia, Botswana and western Zimbabwe; in East Africa, it ranges from southern Tanzania across Kenya and north to Ethiopia. The side-striped has one continuous range, extending from north-eastern South Africa, up through central Africa to east Africa and, skirting north of the Congo Basin, west to Senegal.

A glance at the map thus helps identify which jackal you’re looking at: if you’re in Namibia, for example, it’s a black-backed; if in Zambia, it’s a side-striped. Where the two overlap, say the Kruger Park, they choose different habitats. The black-backed prefers open areas with little dense vegetation. The side-striped prefers woodland and scrub – in general, higher rainfall areas. This also helps explain why the black-backed is better-known: in areas where both are present, it tends to be more visible. Indeed, wherever they occur side by side, the black backed is dominant over its slightly larger cousin, driving it out from grassland into woodland areas.

Grabbing a bite
The poor reputation of jackals derives largely from how they feed: it seems we’re not keen on animals that scavenge from kills, snatch unguarded infants and forage on rubbish. In fact, these are highly versatile and opportunistic predators that have evolved to find food in many ways, and their omnivorous diet takes in everything from invertebrates to fruit, reptiles, small to medium-sized mammals and carrion.

Black-backed jackals are the more predatory of the two, frequently targeting young antelope and sometimes even the adults of species up to the size of springbok. Side-striped jackals will take smaller mammals but also eat a higher proportion of invertebrates and, in season, fruit and berries, which may comprise more than 30 per cent of their diet. A side-striped jackal entering a duck’s pen was observed to target the birds’ feed rather than the bird themselves. Both species will scavenge from the kills of larger predators, such as lions and hyenas, and will actively tail predators on the hunt, hoping for leftovers — hence my sightings at Hwange and Ruaha.

Foraging success comes down to finely honed senses and impressive stamina. A jackal has the classic slim build, long legs and large feet of a long-distance runner, and that relentless trot can cover a lot of ground. They often work in pairs, thus better able to flush out small prey or team up to tackle something bigger, and are most active at dawn and dusk.

Their sharp, curved canines are the weapons of a killer — perfect for dispatching rodents or gripping the throat of an impala ram — while their razor-edged carnassials (cheek teeth) are adapted for shearing meat, though are smaller in the more herbivorous side-striped.
Jackals are jacks of all trades, in short, whose resourcefulness keeps them alert to any feeding opportunity. In the Kruger, I have seen a black-backed jackal capture a guinea fowl at a waterhole with a cat-like spring and, later that same day, another extract dung beetles from steaming fresh elephant droppings.

Read around and you’ll find records of this species killing kori bustards and black mambas, and even harassing an injured rhino. On the coast, they may feed on anything from shellfish to beached whales. And, like most canids, they will readily cache surplus food for later.

Family life
Where jackals become really intriguing, however, is in their social life. And this — if we want to play the anthropomorphic game of evaluating animals on human merits — is perhaps where suspicion should turn to admiration.

In both species, adults form life-long monogamous pairs. The two work in tandem to defend their territory, marking its boundaries with urine and droppings, chasing away rivals and reinforcing their claims with a chorus of nightly wailing. This unearthly howl is one of many noises made by these highly vocal animals (especially black-backeds). Others include yelping, woofing, cackling and that high-pitched yipping used when mobbing a predator.

You may sometimes see jackals foraging in larger groups. Any ‘extra’ adults, however, are likely to be the dominant pair’s offspring from the year before, which — if the territory is productive enough — will stick with their parents for another season. They even work as ‘helpers’ to rear the next litter. This phenomenon is especially important in the black-backed jackal.

The mating season for black-backed jackals lasts from May to August — extending to November in the side-striped. Pups are born after a 60-day gestation and a litter may consist of up to nine pups — typically four to six. They emerge from the den at three weeks, are weaned at eight to nine weeks, can hunt by themselves at six months and reach sexual maturity at 11 months.

In side-striped jackals, the gestation is slightly longer and the average litter size slightly smaller.

In the den, jackal pups form dominance hierarchies of their own, reinforced by play-fighting, with dominant pups being quickest to the food. Their prolonged stay with their parents may mean postponing their own breeding ambitions but also makes them cannier operators, better able to hit the ground running when they graduate to find a territory of their own.

Dangers include predators such as spotted hyenas and honey badgers that may dig out pups, while leopards may sometimes snatch an adult. If they survive all this, they may live for eight or nine years.

Jackals and people
Humankind has had a long and somewhat ambiguous relationship with jackals. Kipling’s Tabaqui is just one example of how these animals have claimed a place in our culture. The ancient Egyptians had a jackal-headed god called Anubis, while in southern Africa, jackals figure prominently in the folklore of the Khoikhoi, often depicted as clever animals outsmarting lions.

In real life, jackals have earned our disapproval for several reasons. First, they do, on occasion, hunt domestic animals and have made enemies of many a sheep-farmers — especially during lambing season. They may also carry a number of diseases and are, most significantly, a major vector of rabies.

Both these factors have led in many places to their persecution: jackal-hunting clubs in South Africa flourished during the 1850s, while subsequent efforts have generally involved poison — a practice that also kills other animals, including vultures, also drawn to the bait.

Jackals’ lush pelts have also let them into trouble. The Tswana people traditionally made hats and cloaks out of black-backed jackal skins. Between 1914 and 1917, nearly 50,000 jackal pelts a year were produced in South Africa, with animals in their winter fur being in greatest demand.

Today, the jackal fur industry is no more, and persecution — though widespread — is at least more regulated, with poisoning illegal and permits required for culling. Jackals are nothing if not resilient, and both Africa’s species are faring reasonably well.

What they could benefit from, however, is a little more love. Stop and watch, next time you’re on safari. Allow yourself a day of the jackal. You won’t be disappointed.

Jackals are very widespread and a common sight in many African conservation areas. Here are five especially good places to watch them.

1 Cape Cross (Namibia): Black-backed jackals patrol the huge colony of Cape fur seals on the Skeleton Coast by day and night, looking for unguarded pups, discarded afterbirth and any other pickings from the ocean.
2 Kgalagadi Transfrontier Park (South Africa/Botswana): Black-backed jackals are especially numerous in the semi-arid savannah; at dusk their wailing calls are the classic Kalahari soundtrack. Check waterholes, where they hunt drinking doves.
3 Nyika Plateau (Malawi): These high, well-watered grasslands are a top spot for side-striped jackals, which are especially thick-furred here due to the high altitude and more often seen by day than elsewhere. Black-backed jackals do not occur.
4 Kruger Park (South Africa): Both species occur in the park, which offers a good illustration of their habitat preferences. Black-backed are more common, with side-striped, in my experience, best seen on night drives.
5 Serengeti National Park (Tanzania): Both black-backed and side-striped jackal occur here, the latter preferring broad-leafed and marshy habitats. Also present is the African golden wolf (formerly golden jackal), which inhabits open grasslands. With luck, you might get to compare all three. 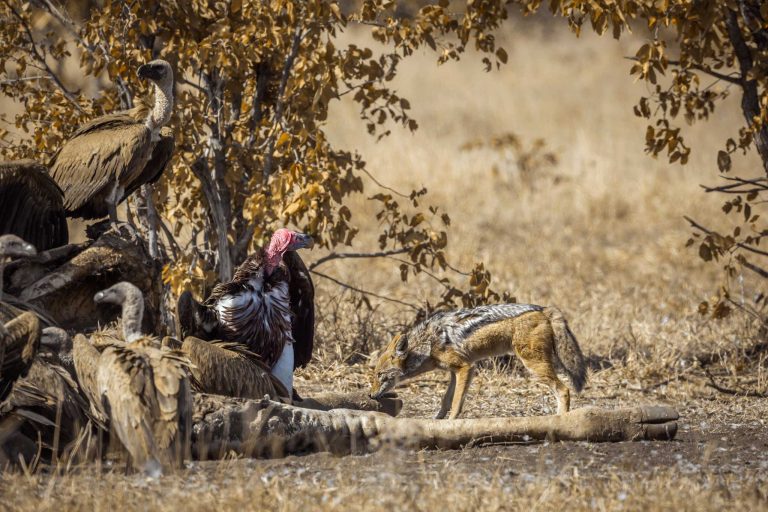 5 Simple Steps How to Avoid Leeches