Our accommodation guide to help you find the pick of the pillows in one of Africa’s most remarkable wildlife regions: the Lower Zambezi Valley. This guide is part of a wider article which appears in the print edition of Travel Africa magazine, edition 88

The accommodation options within the Mana Pools National Park and adjacent Sapi wilderness area vary in size and design, but all are subject to strict environmental impact criteria which demand preservation of the area’s unique wilderness values. Most of the camps are seasonal (closed during the rainy season months – usually December to March – because access is very limited). During the safari season (April–October), access is either by air charter, 4WD road transfer or self-drive. A standard fare of activities, with game drives and walks the principle, are offered at most camps. It is likely they will operate or be able to organise canoeing trips on the Zambezi with a specialist professional guide.

RIVERFRONT LODGES/CAMPS
The largest facilities, situated in their own, exclusive-use concession areas. The biggest accommodates 32 guests.

1 Ruckomechi Camp and Little Ruckomechi  (Wilderness Safaris)
A permanent camp on a private concession in woodland near the confluence of the Zambezi and Ruckomechi Rivers. It has 10 spacious en suite tented units built on wooden platforms and an expansive wooden-decked central living area, with dining-sitting-bar area, pool, and a star-gazing deck. Within the concession is Little Ruckomechi tented camp, which is available for exclusive use by groups of up to six people.

2 Vundu Camp (Bushlife Safaris)
This camp has seven spacious tent-under-thatch en suite chalets and a family unit. Its large, double-storey, wooden central living area is set under shady trees overlooking the river. The main camp is complemented by Little Vundu, a smaller five-tent bush camp 3km upstream. This can be booked for exclusive use and is designed for those who prefer a more traditional tented camp safari experience. Vundu Camp is renowned for its successful anti-poaching efforts.

4 Nyamatusi Camp and Nyamatusi Mahogany (African Bush Camps)
Nyamatusi Camp consists of six luxury tented suites set in a remote part of Mana Pools, downstream from the main floodplain. The camp is spread out widely along the banks of the Zambezi, overlooking the river and the hills of the Zambian escarpment beyond. Its smaller family camp, Nyamatusi Mahogany, consists of two luxury tented suites and two family suites.

5 Chikwenya Camp (Wilderness Safaris)
Chikwenya Camp is situated on a private concession at the eastern boundary of Mana Pools overlooking the confluence of the Sapi and Zambezi Rivers, with a backdrop of the Zambezi escarpment mountains. The camp has seven luxury tents, including two family units. All stand on low wooden decks with pine walkways linking them to the raised main area.

6 Sapi Explorers Camp (Great Plains Conservation)
The 120,000-hectare private Sapi concession adjacent to and downstream of Mana Pools was awarded to operators Great Plains Conservation in 2016 and converted to a private photographic reserve (see ‘Mana from heaven’, p67). Sapi Explorers Camp, situated on the river front, was the first development to be built on the new concession, with five en suite Explorers-style tents. At Sapi Springs Camp, located inland on the Sapi River, a small group of guests have the opportunity to overnight in the open-air, on a raised platform, under a canopy of indigenous trees. This camp will be rebuilt, and new camps developed, in the coming years.

INLAND LODGES/CAMPS
These are slightly smaller (maximum 14 guests), but also on private concession areas. A further three or four are being developed, including one at Ingwe Pan by Machaba Safaris.

7 Kavinga Safari Camp
This camp is located just off the main Mana Pools access road in the southern part of the National Park, 9km from Chitake Spring. It has seven raised platform chalets and a central living/dining area which are set on the edge of a steep cliff overlooking the expansive bed of the upper Ruckomechi River, where a spring attracts wildlife all year round. The camp faces the sunrise over the magnificent backdrop of the Zambezi escarpment, and is becoming renowned for close-up photographic opportunities from a purpose-built hide next to the waterhole below the camp.

8 Kanga Camp (African Bush Camps)
This attractive 12-bedded tented camp is delicately built on decking around the edge of the Kanga Pan. Two of the luxury tents are honeymoon suites or family units, with private dining and seating areas. A lounge area under the shade of large trees overlooks the splash pool and pan, creating a perfect setting for an ‘armchair safari’ (as described in issue 87), especially during the driest months (July – November).

SEASONAL TENTED CAMPS
Privately-run camps spaced out along the Zambezi River frontage. They accommodate a maximum of 12 guests, and operate for only half the year, being removed during the rainy season (around December–March).

9 Camp Mana (Sunpath Safaris)
This simple camp has a magnificent location overlooking the floodplains. Each tent has its own en suite bathroom, with a flush toilet and shower. An expansive Bedouin-style tented area provides a shaded central living/dining area. Sunpath Safaris also offer canoeing, and a mobile tented camp at Chitake Springs in the south of the Park.

11 Mwinilunga Safaris
With a warm family atmosphere of home-away-from-home and a reputation for wholesome cuisine, Mwinilunga consists of six twin tents and a central living/dining area nestled under some enormous mahogany trees. The tents have individual flush toilets en suite but showers are communal. Mwinilunga Safaris also offer a mobile safari option to Chitake Springs.

12 Goliath Camp (Stretch Ferreira Safaris)
Stretch Ferreira is one of Mana’s most renowned professional guides. Reminiscent of an Out of Africa era, this re-designed camp consists of seven East African-style tents, blending seamlessly into the bush.

13 John’s Camp (Robin Pope Safaris)
A traditional, colonial-style 10-bed tented camp with a modern touch, overlooking a vast area of open floodplain. The management team is a family affair, led by John Stevens, one of Africa’s most experienced guides and a co-founder of the Zambezi Elephant Fund which successfully raises funds worldwide for conservation activities in Zimbabwe’s Zambezi Valley.

MOBILE TENTED CAMPS
Temporary camps, taking a maximum of eight guests, erected at various sites along the Zambezi River or inland at Chitake Springs in the southern section of the Park.

15 James Varden Safaris
James Varden is recognised as one of Africa’s top professional walking guides, with more than 25 years of experience. In combination with Natureways and his horse-riding safari company, Ride Zimbabwe, he offers a variety of activities from his mobile tented camp.

ZIMPARKS ACCOMMODATION
The Zimbabwe National Parks Authority (ZimParks) offers a variety of budget accommodation near their Nyamepi office and at Chitake Springs.

16 Lodges and cottages
There are two self-catering eight-bed double-storey lodges and three four-bed cottages located upstream from the ZimParks office at Nyamepi. These are equipped with furniture and bedding, basic kitchen facilities, gas stove, fridge and bathrooms with flush toilets, hot showers and/or baths. The facilities are serviced.

17 Tented Camp and campsite
Just upstream from the ZimParks lodges, at Gwaya Camp, are five self-catering, en suite tents overlooking the river. These each accommodate two people and are fully-equipped with a barbeque stand and a separate kitchenette adjacent to the tent. The tented camp is serviced.

Nyamepi campsite. This consists of about 30 camping sites, with four basic ablution blocks which have flush toilets, showers and hot and cold running water. Water is available from several taps in the campsite, and firewood can be purchased at the Parks office. The camp is not fenced, so it is necessary to exercise caution as wild animals can wander through.

18 Exclusive use campsites
These remote camping sites have no facilities at all except for a long-drop toilet each. They are available to groups of 6-12 visitors and are located at various places along the Zambezi River (New Ndungu, Mucheni 2 & 3) and at Chitake Spring in the extreme south of the Park.

Recognising the importance of the 120,000-hectare Sapi wilderness area, adjacent to Mana Pools National Parks, ZimParks awarded the concession to Great Plains Conservation in 2016, who have transformed it into a private photographic reserve and conservation area.

For decades Sapi had been used for hunting by previous concessionaires. Not only is it hoped that this change of use will allow wildlife to flourish, but also that the expansion of protected wilderness around Mana Pools will go some way to relieving the pressure of overpopulation (of camps and animals) in the National Park itself.

To aid the area’s recovery, Great Plains has adopted an approach designed, it says, to “encourage wildlife back into the reserve”. Having stopped the hunting, the team conducted a survey of what species they had, and brought in scientists and ex-hunters who knew the area to assist with the rehabilitation project – a move that has seen “elephant and buffalo herds beginning to trust this part of the land as well as the continuous movement of human kind within their environment”.

With just two camps in the concession – the five-tent, 10-guest Explorers Camp and the smaller Sapi Springs, which is to be rebuilt – Sapi is yours to explore exclusively, although that exclusivity, naturally, comes at a price. However, with around 80 per cent of the area only accessible by foot, this is prime walking and canoeing country.

Renowned filmmaker and CEO of Great Plains Dereck Joubert explains the concept behind the camps: “I think you miss out on so much if you arrive by air, get on a vehicle, go to the camp, drive, have lunch, dinner, drive and fly out. That isn’t Africa. Not my Africa anyway.

“You can expect walking safaris from the edge of Mana Pools down the Zambezi through great elephant and lion country, into the interior to giant baobabs. We want to transport you into the safari of Hemingway’s days or Selous or Burton and Speke… without the constant barrage of gunfire they used to annihilate the big game.”
By Phil Clisby

To buy a print copy of this edition of the magazine, go to https://travelafricamag.com/product/issue-88/ 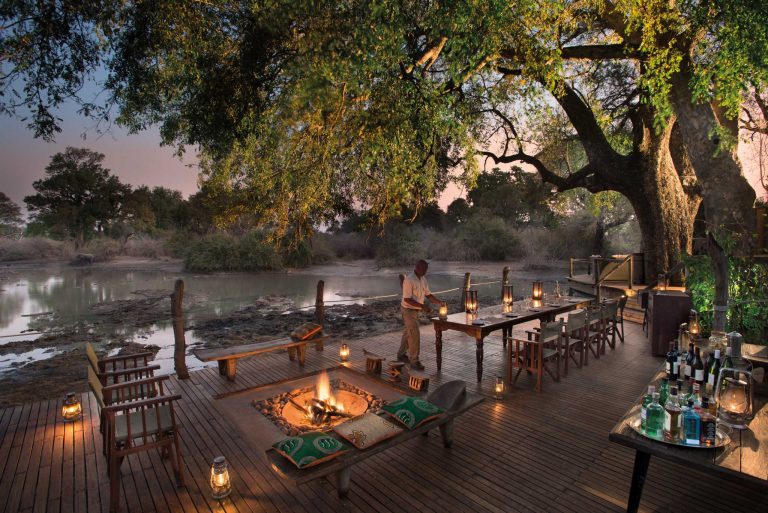 Top One Day Hikes Around Taipei

Five Beaches that are Hot Year Round