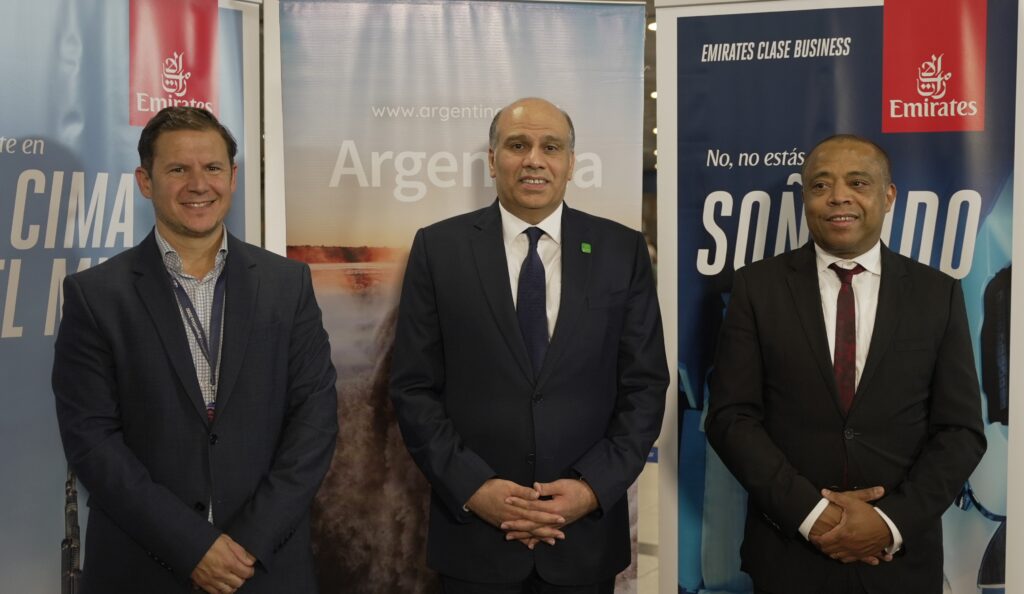 Emirates has resumed its flights to two South American destinations, Rio de Janeiro and Buenos Aires, which were previously suspended due to the COVID-19 pandemic. Flight EK247, operated with a Boeing 777 aircraft, received warm welcomes on its journey into Brazil and Argentina on Wednesday. Rio de Janeiro’s RIOgaleão organised a traditional water cannon salute to mark the airline’s return to the Brazilian city. Passengers and crew were greeted with samba dancers who put on a lively cultural performance in the presence of the airport’s management team.

With the resumption of services to Argentina, which was first launched in 2012, Emirates has restored over 90% of its pre-pandemic network, comprising over 130 destinations including Dubai. The four-times weekly flights from Dubai to Rio de Janeiro with onwards service to Buenos Aires will operate as EK247/EK248.


In South America, Emirates also operates daily flights between São Paulo and Dubai, operated with its popular flagship A380 aircraft and featuring its signature Onboard Lounge for premium class passengers and Shower Spa in First Class.

Travellers flying with Emirates can enjoy the best experience in the sky with an unmatched culinary experience, thanks to regionally-inspired multi-course menus developed by a team of award-winning chefs and complemented by a wide selection of premium beverages. Customers can sit back and relax with more than 5,000 channels of carefully curated global entertainment content, including in Portuguese and Spanish, featuring movies, TV shows, music, podcasts, games, audiobooks and more with ice, Emirates’ award-winning inflight entertainment system.

Customers travelling in premium class cabins and select Skywards members can enjoy lounge services before their flights in Rio de Janeiro, Buenos Aires, and Sao Paolo, to relax or catch up on work before flights. Chauffeur drive services are also available to customers at both points in Brazil in addition to Argentina. At Dubai International airport, Emirates has a range of lounges available to its premium class customers in addition to chauffeur drive services to and from the airport.

Both Brazilian and Argentinian nationals traveling to Dubai enjoy a convenient visa on arrival, making a stopover in the city easy and hassle-free.


The resumption of Emirates flights will also facilitate trade between Argentina, Brazil and the rest of the world through Emirates SkyCargo, the airline’s cargo division. The airline’s wide-body Boeing 777 aircraft accommodate a cargo capacity of around 20 tons per flight to transport regional exports from Argentina and Brazil to consumers in the Middle East, Europe and other markets, while supporting the import of essential goods, including pharmaceuticals.

Since 2007, 58,000 tons of goods were exported out of Brazil and 62,000 tons of imports were transported using Emirates’ services on passenger flights, in Sao Paulo and Rio de Janeiro. In Brazil, Emirates SkyCargo also offers dedicated freighter services to Viracopos airports. Over the past 10 years, Emirates facilitated the export of 23,000 tons of goods out of Argentina and 21,000 tons of commodities were imported using its services.

Argentina has long been a popular tourist destination for global travellers and in 2019 was ranked the 4th most visited destination in South America, and 28th in the world, in terms of visitor numbers, according to Worlddata.info. In 2019, Argentina recorded 7.4 million tourist arrivals, out of which Buenos Aires ranked 88th place of the world’s most popular cities with 2.77 million visitors mainly encompassing leisure, business and VFR travellers.

Brazil ranked the 9th most visited destination in South America, and 32nd in the world, recording 6 million tourist arrivals in the same year. Rio de Janeiro took the top spot amongst most visited cities in Brazil and reached the 99th place of the world’s most popular cities with 2.33 million tourists.

Emirates currently serves over 130 destinations in its network, providing services to customers across the globe. Through a convenient connection in Dubai, the airline facilitates travel between the Americas, Europe, Africa, the Middle East and the Asia Pacific.

Passengers traveling to and from other destinations in South America, including connections between Rio de Janeiro and São Paulo, can take advantage of Emirates’ codeshare and interline partnerships with regional partners such as GOL, LATAM, Azul, Copa and Avianca to continue their journey seamlessly.