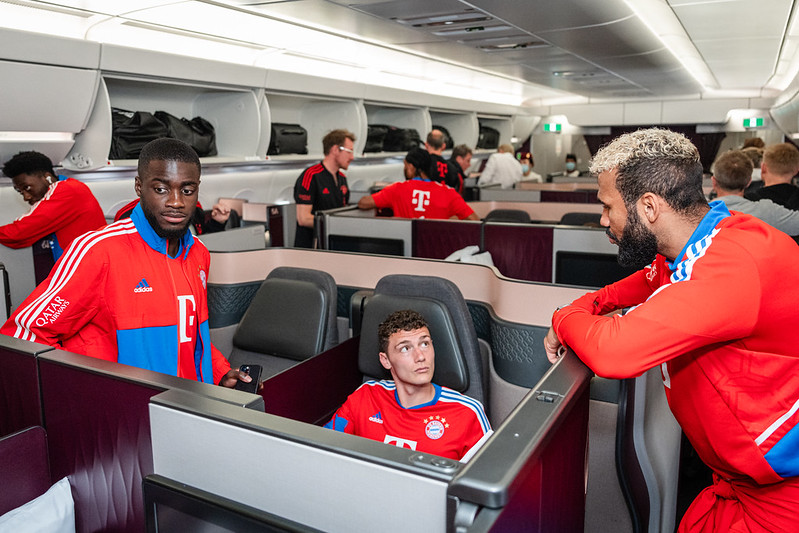 Qatar Airways, the Official Airline Partner of FC Bayern Munich, welcomed back the European football giants to Doha for their 2023 Winter Training Camp. From 6-12 January, some of the best-known names in European football underwent intense training as the reigning German football champions held several activities to mark the partnership, leading up to the resumption of the regular 2022-2023 season.

Led by team manager Julian Nagelsmann, 21 players from Bayern Munich travelled with Qatar Airways from Munich to Doha for a 6-day training camp. The squad list included numerous key names, including the addition of Daley Blind, whose signing was announced in Doha, defenders Alphonso Davies and Dayot Upamecano, midfielders Thomas Müller and Joshua Kimmich, forwards Kingsley Coman and Serge Gnabry, along with several other seniors and academy members.

Qatar Airways Group chief executive, Akbar Al Baker, said: “In December 2022, Qatar Airways played a key role as the Official Airline of the Journey during the FIFA World Cup Qatar 2022™, operating nearly 14,000 flights during the tournament. With the start of 2023, we are gaining momentum by welcoming our very own partners FC Bayern Munich.

Qatar’s ideal weather conditions and state-of-the art facilities provide the perfect conditions for the German champions to be prepared for the challenges ahead, and we are proud to have played a role in their success over the years.”

Platinum members of Qatar Airways Privilege Club were treated to an exclusive meet-and-greet session with senior members of the Bayern Munich squad, where they had the chance to get to know the players through a memorable experience that also included receiving a signed jersey by the players. Additionally, the airline’s Loyalty Program – Student Club members enjoyed an up-close viewing of the team’s training sessions during the winter camp.

Qatar Airways Holidays introduced the  Ultimate Fan Experience Packages, offering a unique opportunity to their valuable customers to travel to Paris to support FC Bayern in their upcoming blockbuster fixture in February 2023, in addition to a special meet and greet experience.

The World’s Best Airline has been in partnership with Bayern Munich – Germany’s most decorated football club – since 2018. This year’s winter camp gave way to local community engagement with a special meet and greet with students from Qatar Airways’ Oryx International School who had the opportunity to learn technical skills from the celebrated players. During the club’s visit, the airline also invited children from Al Shafallah Center to meet the football stars on the sidelines of their training session.

Sporting a dynamic partnership portfolio, Qatar Airways has also been the Official Airline of FIFA since 2017. The alliance has gone on to connect and unite fans globally, with the World’s Best Airline also sponsoring numerous football tournaments such as the FIFA Confederations Cup 2017™, the 2018 FIFA World Cup Russia™, the FIFA Club World Cup™, the FIFA Women’s World Cup™ and the FIFA World Cup Qatar 2022™.