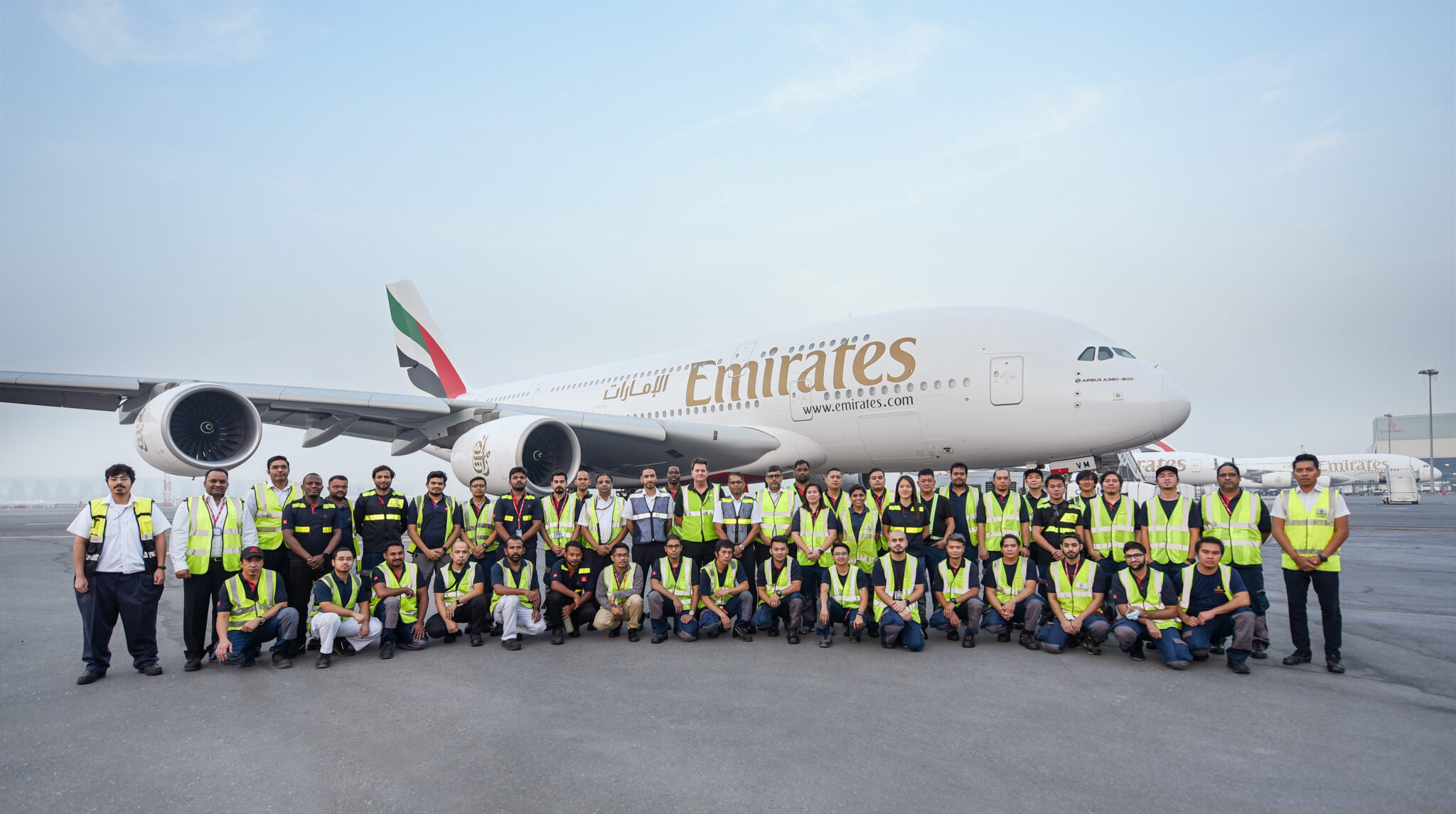 First Emirates A380 rolls in for full cabin refresh and refit

Emirates began its massive 2-year retrofit programme with work starting on the first of 120 aircraft earmarked for a full cabin interior upgrade and the installation of the airline’s latest Premium Economy seats.

This ambitious project represents a multi-billion dollar investment to ensure Emirates’ customers fly better for the coming years. After completing flight EK928 from Cairo to Dubai on Monday, A6-EVM was steered to Hanger E at the Emirates Engineering Centre where a team of specialised engineers began prepping the aircraft for its makeover.

In addition to recruiting 190 additional staff for the project, Emirates is also engaged with 62 key partners and suppliers who have hired hundreds more skilled hands for the biggest-known aircraft retrofit programme in modern commercial aviation.

After months of meticulous planning, and months of detailed test runs on an actual A380 aircraft, engineers took stock and requested 2,200 part numbers. In turn, Emirates’ procurement team went into overdrive and raised 12,600 purchase orders for the initial phase of the programme. At the Emirates Engineering Centre, purpose-built workshops have been set up and stocked with parts and equipment for the project.

Overview of the process


For the next 16 days, round the clock, teams of engineers and technicians will take apart the entire cabin interior of the A380 and put it back together again in a carefully planned and tested sequence.

Thousands of parts will be removed, replaced, or receive a facelift. Even Emirates’ famous Shower Spa will feature new colour tones with a hand-stencilled motif of a Ghaf tree.

Trained teams will implement a consistent process for every aircraft – a team of engineers will first remove the window seats in Economy class, freeing up space for another team to remove the side panels of the cabin interiors. These panels will go straight to one of three purpose-built workshops to be laminated with Emirates’ latest colour tones. To make room for the 56 Premium Economy class seats, 88 Economy seats at the front of the main deck will be removed.

All carpets and floorings throughout the aircraft cabins will be replaced before the refurbished seats are re-installed.


All processes were designed to the highest health and safety standards. No detail was too small to review, for instance, the decision to invest in the latest equipment to protect workers from harmful vapours in the cabin while the First Class shower spa gets a hand-painted makeover.

Once the refit work is completed, the aircraft will be inspected and certified by aviation authorities before it re-enters service.

The second aircraft scheduled for a makeover, A6-EUW, will roll into Emirates Engineering Centre on 01 December. As the programme goes into full swing, engineers will work simultaneously on two aircraft. This means, every eight days, one aircraft will be grounded and towed to Emirates Engineering for retrofitting. By 23May 2024, all 67 A380s earmarked for the retrofit programme will be back in service and Emirates will then begin work on 53 of its Boeing 777s. By March 2025, all 120 retrofitted aircraft will be back in service.

Emirates’ new Premium Economy cabin class, which offers luxurious seats, more legroom, and a service to rival many airlines’ Business Class offering, is currently available to customers travelling on popular A380 routes to London, Paris and Sydney. More customers will be able to experience Emirates’ Premium Economy cabins as the retrofit programme picks up pace.

The airline has announced plans to introduce Premium Economy service on its routes to New York JFK, San Francisco, Melbourne, Auckland and Singapore, by end March 2023.