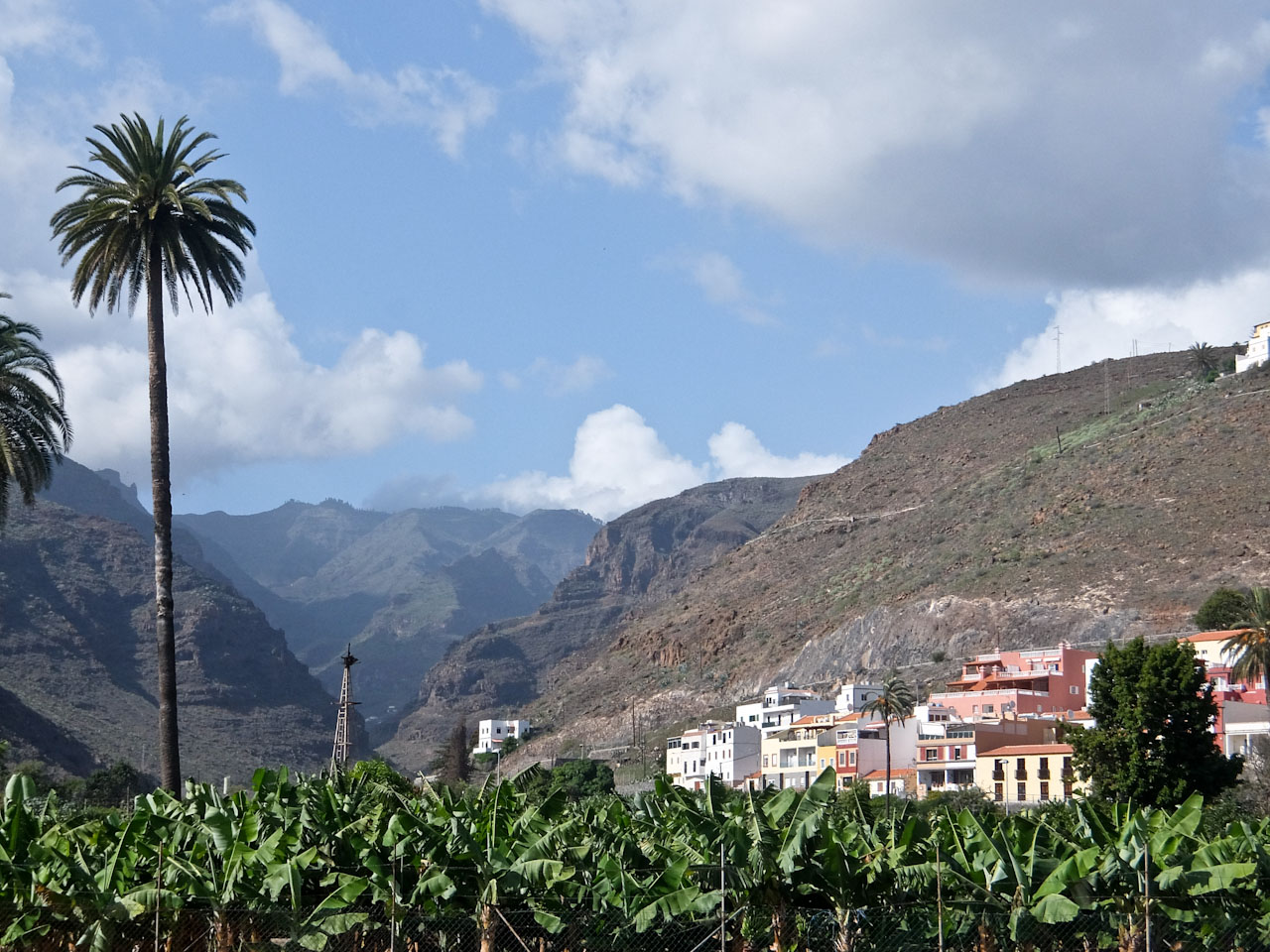 One of the most unspoilt of the Canaries, and almost the smallest, the best way of exploring La Gomera is on foot.

A short ferry ride from Tenerife, La Gomera is basically a small circular lump of volcanic rock that sticks out of the sea, rising to a height of almost 1500m. A long distance walking trail, the GR132, circumnavigates the island crossing many steep-sided barrancos or canyons which cut into the coastline. The walking is rugged here and always involves a certain amount of ups and downs.

At various stages the trail climbs to the higher parts of the island, entering Laurisilva cloud forest, remnants of a much larger forest which once flourished all around the Mediterranean. It’s been designated as a protected area, the Parque Nacional de Garajonay, where you can experience this rare woodland for yourself.

I’m going to be walking around La Gomera for almost a week, starting in the capital San Sebastian and finishing in Playa de Santiago. I’ll be carrying a small back pack and staying in a different place every night. There are no roads around the coast, just well signposted walking trails, and this is the best way to get intimate with the island. 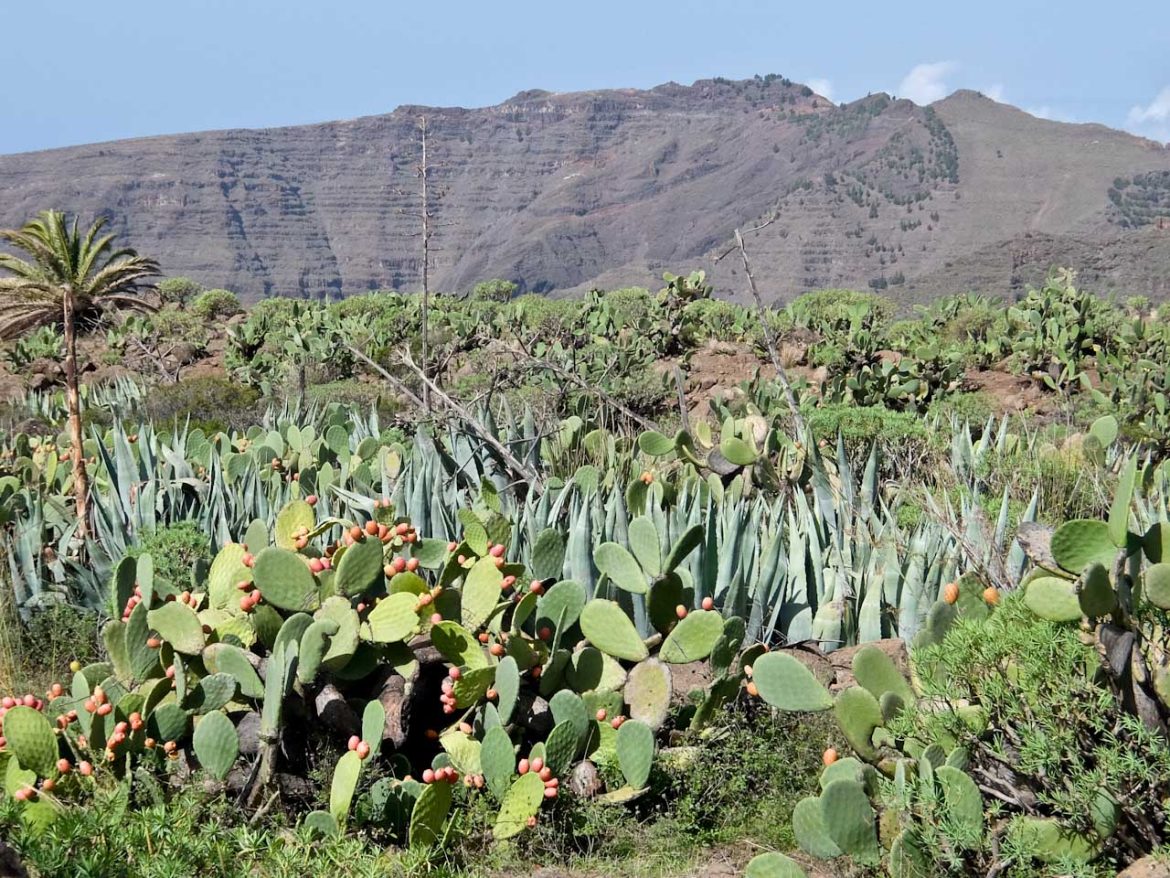 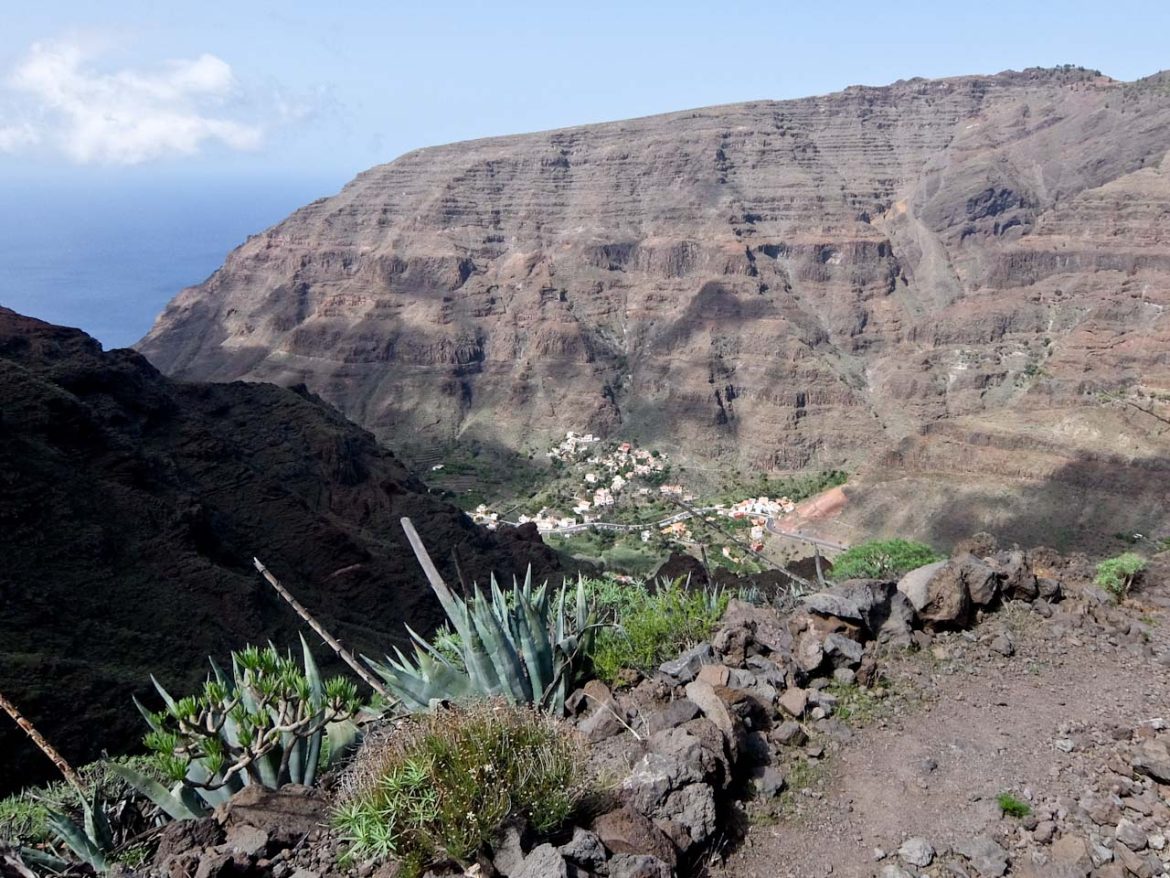 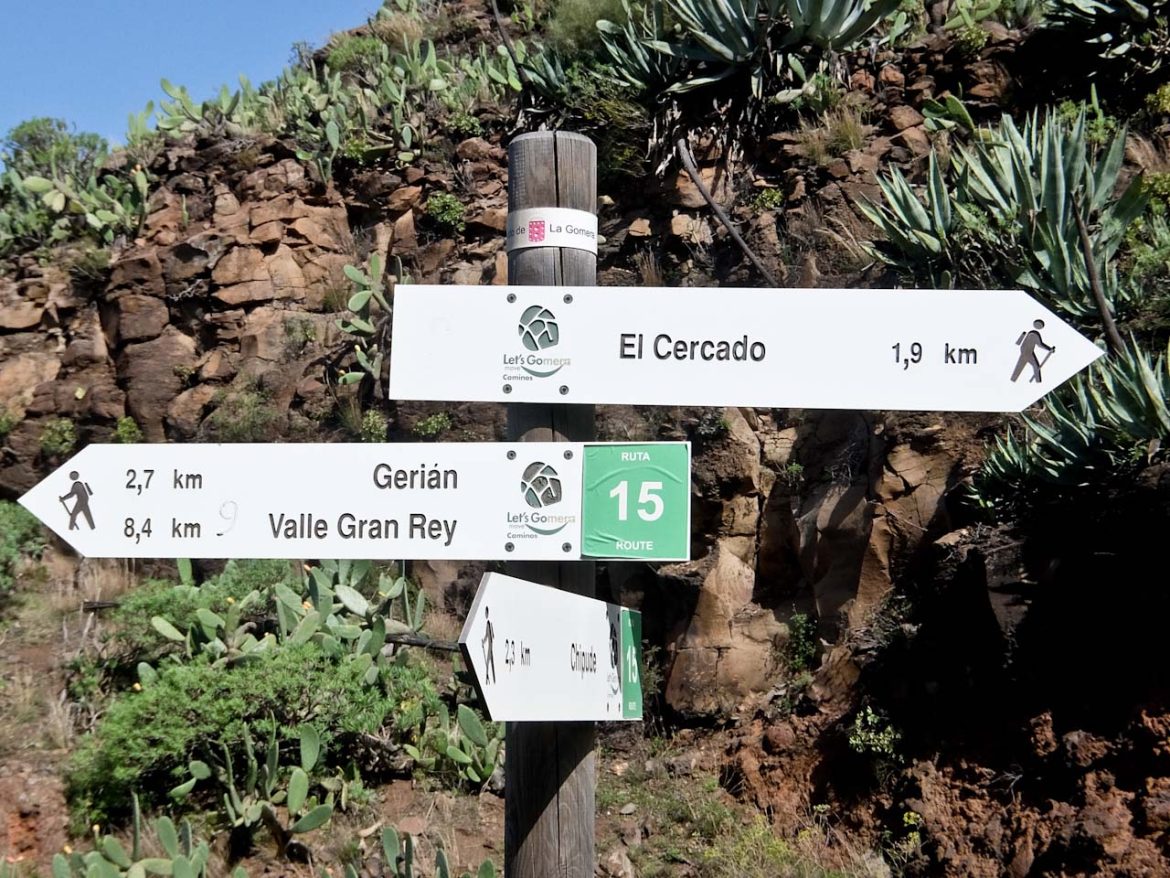 It makes sense to start at the highest point of the Island so, after taking a bus from San Sebastian to the Pajarito roundabout, I climb up the signposted path to the summit. Unfortunately, I’m already in the cloud so I miss the advertised stunning views. It’s then downhill following the signs to Chipude where I’m suddenly in bright sunshine. This is a small village with bars and restaurants but I press on, always descending.

For a while the path runs alongside an irrigation channel and then meets the GR132 for the first time. I’ll be following this for the next few days and it climbs up to the rocky gap of Degollada de los Bue. Here there are tremendous views of Valle Gran Rey and the sea. The paved track winds down, often steep but after crossing the barranco, reaches La Calera, my destination. I’ve made good time and there’s even a chance for a refreshing swim.

The only way is up today and it’s a step climb on a good path with views of Teide on Tenerife in the distance. I follow the cliff edge with the sea on one side and the deep green Valle Gran Rey on the other. After about two hours I reach the viewpoint “Riscos de La Mérica”, really just a single solitary tree. The path then traverses a plateau covered with low bushes to a couple of rocky outcrops.

From here, I can see the white houses of the village of Arure where I’ll be leaving the GR132. I’ll be coming back this way tomorrow but need to carry on climbing upwards to Las Hayas, my accommodation for the night. The cloud has come down and it’s a mixture of drizzle and mist as I follow the trail through a forest. Feeling distinctly dejected, I finally reach my destination where shelter and a beer lifts my spirits.

It’s a longer distance today so I set out early in the morning mist. I walk back down mainly on the road to Arure and rejoin the GR132. From here it’s a spectacular narrow traverse across the cliff face, negotiating buttresses and gullies. There’s sporadic drizzle and a spectacular rainbow appears over the valley of Taguluche, as I descend to the village of Alojera.

From here it’s a steep climb, crossing loops in the road, and I’m now completely in cloud and driving rain. Pine and Laurasilva forest surround me, and it feels like a completely different climate zone. A small church looms out of the mist, the Ermita de San Isidro and then I reach a large road before taking a gentle downhill trail along the crest of Lomo de Los Cochinos. Vegetation is now junipers and prickly pears and the sun comes out as I enter Vallehermoso.

Another tough day ahead and it starts with a steady climb up to Roque Corno, the landmark overlooking Vallehermoso. I go round it and then enter Laurasilva forest, the trail moist and muddy underfoot. It drops down to a reservoir then climbs up to the Garajonay National Park visitor centre which has exhibitions on the flora and fauna of La Gomera

Unfortunately the normal path down to Agulo is closed because of a landslip so I take a steep vertiginous alternative. It zigzags directly across the cliff face, very hard on the knees, but eventually I’m down among the banana groves of Agulo. From here I drop down to the sea and follow the coast to Playa de Santa Catalina. A short road walk brings me to Hermigua. 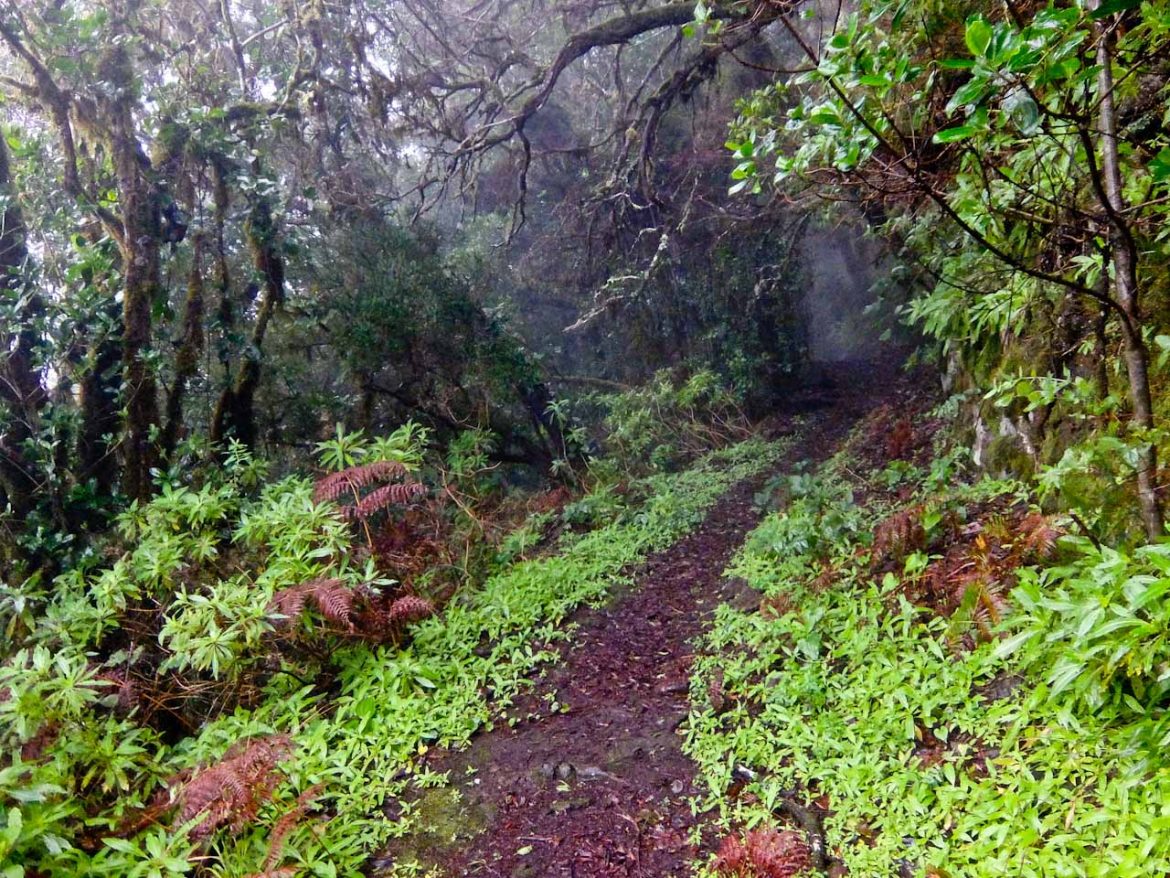 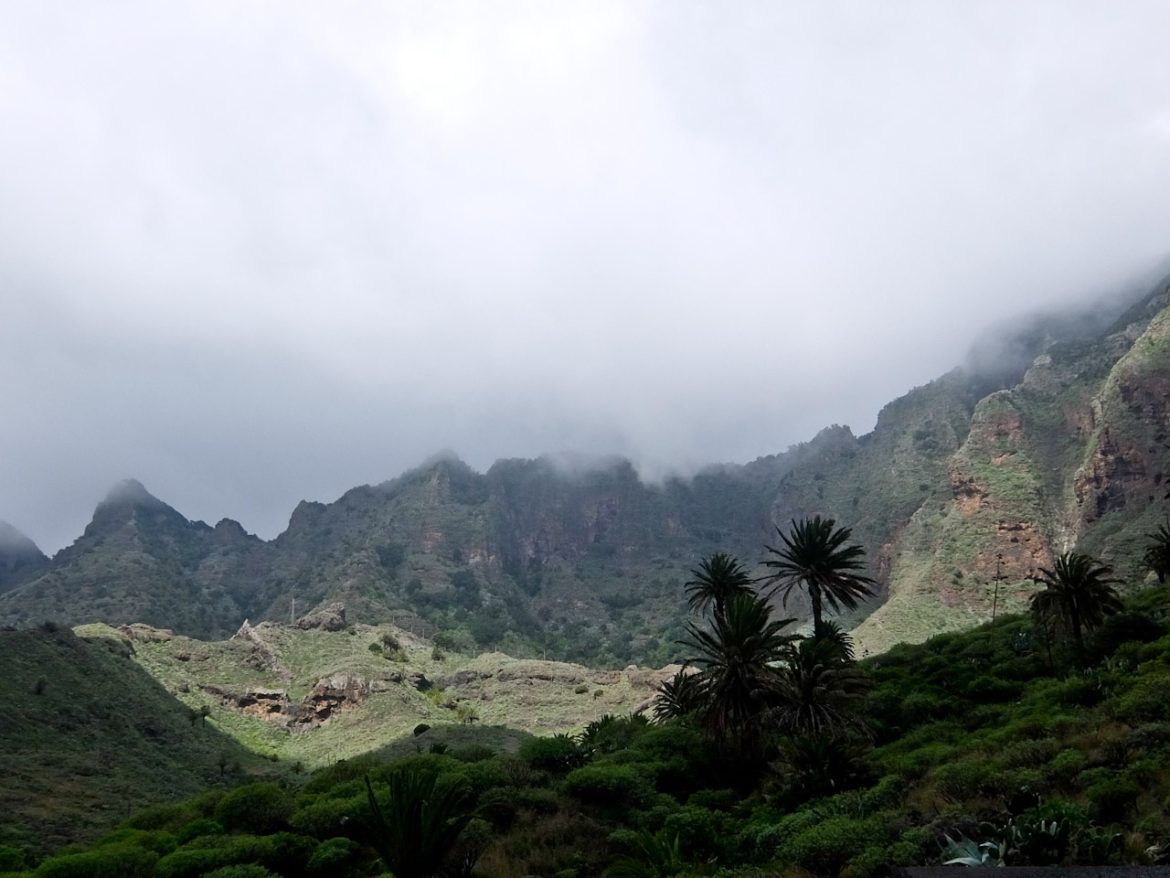 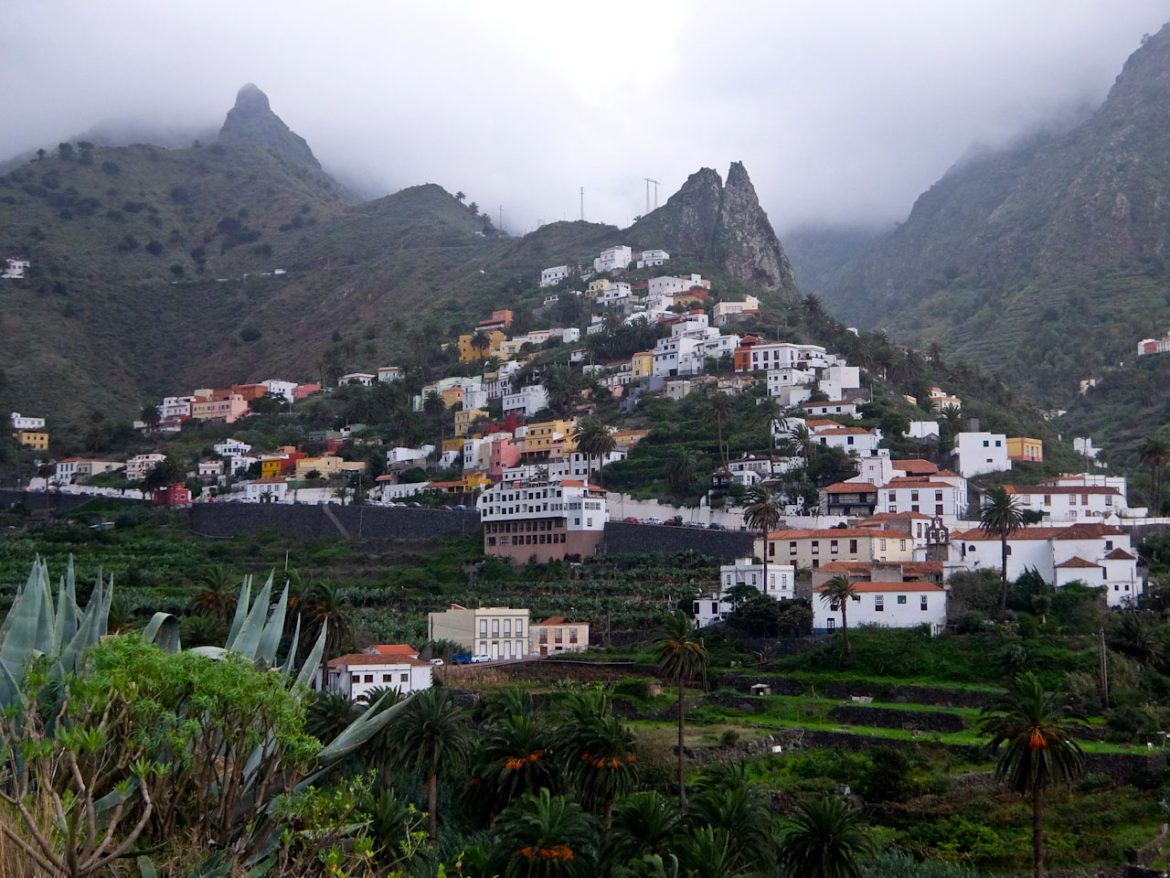 The day starts gradually climbing through banana plantations on the side of the valley. At 600m, I’m in a cloud and then leave the road and enter Laurasilva forest. The ascent is steep and the narrow path leads through trees covered in shaggy moss, slightly mysterious. At 850m I suddenly cross the watershed and look down into a long valley in the sunshine.

The path drops down, through cacti and agaves, to a road and then another path, the landscape becoming lush and green. Further down I meet the road again and I follow this all the way to San Sebastian, around 10 km. There’s little traffic and it takes me past attractive gardens and small hamlets before reaching the outskirts of the capital.

I’ve deliberately saved the toughest day until the last, a coastal path crossing a multitude of barrancos. There are a lot of ups and downs today but the sea is always with me. After an hour, I reach the first beach, Playa de la Guancha and then zigzag upwards. Then it’s down to the next beach, Playa del Cabrito, a former banana plantation now a hotel.

More switchbacks lead upwards to a ridge and then climb to the abandoned settlement of Morales. Then it’s a leisurely descent down past Contreras, another abandoned house, with Playa de Santiago tantalisingly in the distance. Unfortunately there are three more barrancos to cross before I finally reach the Hotel Jardin Tecina. This is a luxurious establishment where I sink into the swimming pool and sooth my aching limbs.

FLY: There are no direct flights to La Gomera, instead Ryanair flies from Stansted to Gran Canaria and then Binter Canarias takes you to the island. Another alternative is to fly to Tenerife South and take a ferry.

INFO: La Gomera Travel has information about the island.

GUIDE: Cicerone’s Walking on La Gomera and El Hierro is an indispensable companion.