10 classic tracks from across the ages, by Philip Briggs

Most Travel Africa readers will be familiar with Philip Briggs, the author of numerous Bradt guides who has written for nearly all of our 90 issues, drawing on his vast experience of travelling to many African countries over the last 25-or-so years. Phillip is a keen music fan, so we couldn’t resist asking him to share a few of his favourite African recordings with us. He’s chosen one older track and a more modern one for each of five of Africa’s best-known musical powerhouses: Mali, South Africa, Kenya, Congo and Ethiopia.

Mali is perhaps my favourite African destination musically. It has such a strong living musical tradition, and it’s one of those rare countries where local sounds still completely dominate the airwaves — it was pretty unusual to hear anything but homegrown music when we last visited it about 15 years ago. More recently, in 2018, I was fortunate enough to catch a live performance by one of my favourite Malian singers, Oumou Sangaré, the so-called “Songbird of Wassoulou”, on a visit (of all places) to North Macedonia. It was a thrilling electrified performance, but to me, her earlier, earthier traditional material, such as this track from her debut album Moussolou, is more evocative of Mali’s wide open Sahelian savannah, and atmospheric Niger river ports such as Djenne and Timbuktu.

I’m increasingly drawn to music that combines traditional and modern sensibilities, and this highlight off the debut album by Aminata Wassidjé Traoré, a Songhai singer from Diré, near the legendary city of Timbuktu, is a great example with its sparkling production and stinging guitar work.

I know almost nothing about this track. It would have been recorded in the 1950s or thereabouts by the state-controlled South African Broadcasting Corporation (SABC) for one of the various racially-slanted radio stations it operated in line with the then-recently implemented apartheid policy. Back then, the SABC paid black musicians next to nothing for their efforts, details of the sessions went undocumented (so far as I can ascertain, the names of the vocalists and instrumentalists on this recording are all unknown), and most of the tracks languished in obscurity for decades prior to the post-apartheid era. Despite this, the complex guitar and accordion riff, overlaid with gruff sing-speak isiZulu harmonies, exudes vitality — an utterly compelling listen.

(For those interested in exploring further, several hundred vintage SABC recordings, spanning a staggering array of traditional and popular styles and several different languages, were anthologised in 2000 on a set of 10 double CDs entitled African Renaissance Vol 1-10.)

Strong and inventive vocal harmonies remain a feature of much traditionally-influenced music from South Africa, and this performance by Bantu Continua Uhuru Consciousness, a Soweto-based seven-piece that incorporates a variety of traditional and modern styles into their fusion sound, is no exception. Recorded live in France with no overdubs in 2016, the bass guitar is the closest thing to a lead instrument, and the heavily percussive but otherwise sparse backing allows plenty of breathing room for the contrasting vocal stylings of male singers Jovi and Hloni (harsh, angry) and the only female member Kgomotso (gentler but equally impassioned). Stunning!

This 90-second duet stopped me dead when I first heard it. It was recorded by Hugh Tracey at Sotik, in the highlands east of Lake Victoria, and features two young Kipsigis sisters singing shyly in their Nilotic language over a gently strummed lyre-like chepkong. According to Tracey, ‘Chemirocha’ is a bastardisation of Jimmy Rodgers, the name of an American country singer whose trademark yodelling style, emanating disembodied from the gramophone players to reach the area, was so startling that it led to him being venerated as a kind of half-human, half-animal spirit figure. True or not, this unlikely back story is reflected in the strange ethereal quality of this unique duet.

(Chemirocha ranks among the best known of roughly 40,000 field recordings made between 1948 and 1963 by Tracey, who travelled throughout the subcontinent, from South Africa to the Congolese jungle and royal courts of Rwanda and Uganda, to capture traditional music that might be otherwise be lost to us entirely. These recordings have been anthologised over 20-odd CDs by SWP Records; this track opens a set called Kenyan Songs and Strings, recorded mostly in the west of Kenya in 1950 and 1952, as well being the first track on the introductory Very Best of Hugh Tracey, a wonderful collection that compiles one track from each of the first 21 volumes in the series.)

Powerful in an altogether more upfront way, Kenyan Message is another song that takes some inspiration from an American source, in this case Grandmaster Flash & the Furious Five’s influential 12” single The Message. One of several highlights on self-styled ‘musical and cultural firebrand’ Muthoni Drummer Queen’s genre-busting 2018 debut album She, the mixed Swahili and English lyric chastises Kenya’s political and religious leaders for their ineptitude, greed and out-of-touchness with ordinary people. Scorching stuff.

Democratic Republic of the Congo

The musically prolific Democratic Republic of the Congo is best known as the home of rumba (named after the Cuban counterpart from which it derives) and its more electrified younger sibling soukous (derived from the French secouer, literally ‘to shake’). Dating back to the immediate post-WWII era, both styles are notable for their jittery guitar lines, danceable beat and cheerful vibe, and they went on to have an immense influence on popular music elsewhere on the continent, from Zambia and Zimbabwe to Kenya and Ghana. An excellent introduction to these pioneering sounds is Crammed Discs’ meticulously annotated 2CD compilation Roots of Rumba, which collects 40 recordings made between 1953 and 1955. One of several highlights of the set is this laidback homage to Kinshasa’s hectic Prince Baudoin Boulevard, complete with bicycle bells, hooting saxophones and reputedly the first electric guitar to feature on a Congolese recording.

The soukous beat still underlies much Congolese music, but the post-millennial trend is towards a denser and more discordant electronic sound using an eclectic mix of salvaged and homemade items for percussion, and/or amplified traditional instruments such as the likembé (finger keyboard). Leading proponents of this DIY ethic include Konono No1, Staff Benda Bilili and Kasai Allstars, but an excellent starting point — with an underlying beat reminiscent of Prince Baudoin, recorded more than 60 years earlier — is this echoey and claustrophobic standout from Mbongwana Star’s 2015 debut album From Kinshasa.

Ethiopian music, both contemporary and traditional, doesn’t much resemble anything else you’ll hear in Africa, or elsewhere for that matter. On initial exposure, researching the first edition of the Bradt Guide to Ethiopia in 1994, it took me a bit of getting used to. But I soon grew to enjoy it, and one of my fondest memories of that trip is hanging out in the row of azmari bars that lined the road opposite the Piassa’s time-warped Taitu Hotel. Here, inspired by the new mood of liberalism engendered by the fall of the appalling Derg regime two years earlier, traditional azmaris (literally ‘praise singers’, though they tend to hurl insults as freely as they sing praises) would grumble, jest and improvise innuendo-ridden songs into the wee hours, accompanied only by a one-stringed masenko fiddle and bow or lyre-like krar.

I doubt that many of these singers — flame-keepers of a folkloric musical tradition that stretches back several centuries — ever made professional recordings, and their rambling style is something of an acquired taste. All the same, this animated performance from around the same time as my first visit to Ethiopia perfectly evokes the feel of these low-key azmari bars, which often held no more than a dozen customers. It is one of 13 similar recordings compiled on the Buda CD Ethiopiques 2: Tètchawèt ! Urban Azmaris of the 90s.

Fast forward to 2004, and I was back in Ethiopia researching the fourth edition of my Bradt guide. The country had undergone a quite incredible transformation in the intervening ten years. This was reflected in the more modern — but still decidedly Ethiopian — music played in the bars and restaurants of Addis Ababa. The musical ‘It Girl’ at that time was Gigi (full name Ejigayehu Shibabaw), whose eponymous second CD, released in 2001 and listed at number one in the New York Times round-up of that year’s ‘Best Obscure Albums’, boasted an eclectic sound that set typical Amharic vocal inflections against a fusion of jazz, reggae and other African styles. The album soundtracked that trip, playing in every other bar and restaurant we visited, and the standout track Bale Washintu remains one of my perennial favourites.

For more of Philip’s favourite music from Africa, click here. 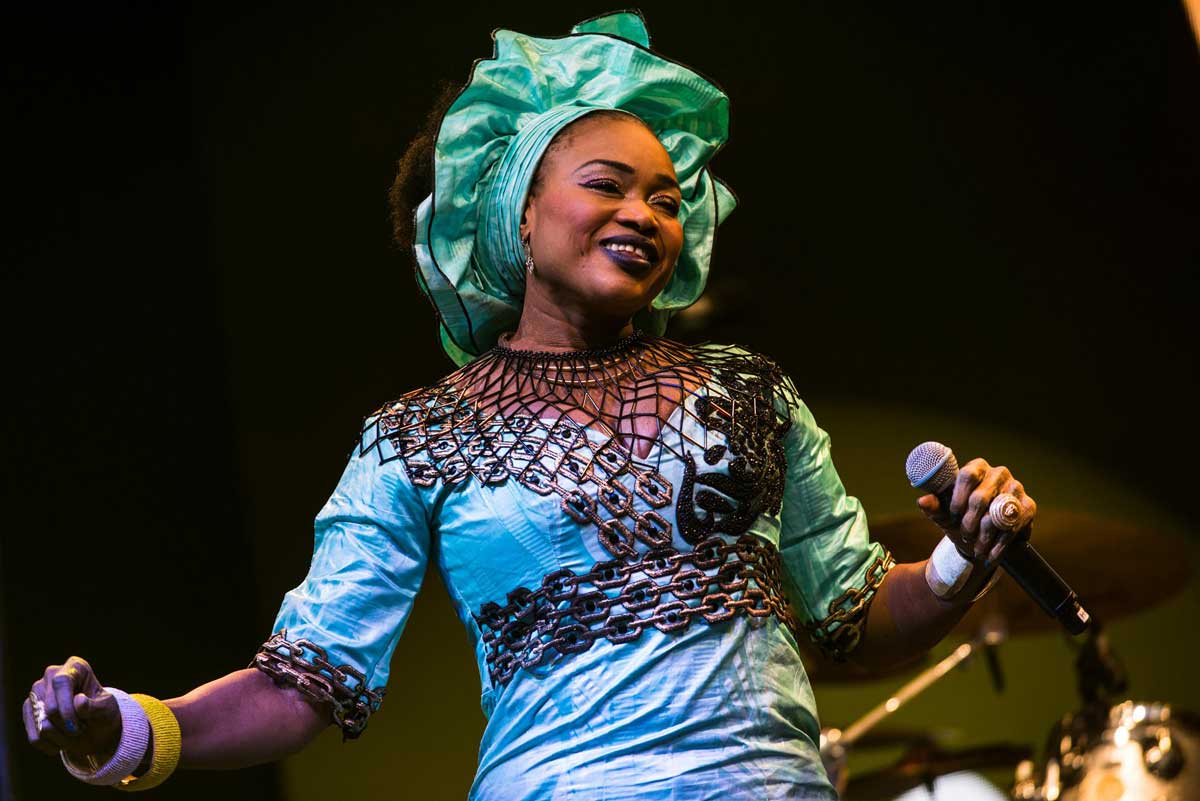 A Paradise of Shelters in Denmark