Kenya is one of Africa’s most well known destinations, which is no surprise as there are plenty of reasons to visit Kenya!

It has one of the largest cities in East Africa and some of the continent’s most famous national parks, as well as the fine beaches that line its Indian Ocean coastline and welcoming array of cultures.

Here are some of our best picks of what makes Kenya so special, and our top reasons to visit Kenya.

Arguably the most popular safari destination on Earth and it’s easy to see why. The Maasai Mara National Reserve is a major reason to visit Kenya. The land is famous for its wealth of cheetahs, lions, leopards, giraffes, elephants and other unique animal species, some found only in Kenya. It’s also the sight of the Great Migration in summer and early autumn, where the likes of Thomson’s gazelle, wildebeest and zebra all make the journey south to the Serengeti in their hoards, quite literally in their millions.

We recommend this Maasai Mara camping trip with GAdventures.

Kenya’s coast is unlike anywhere else in the country, and it’s not just the gorgeous white sand beaches! The majority of the Muslim population are lined along the towns and cities of the coastline, most notably, Mombasa. Kenya’s second city has remnants of its Arabic influence within the quaint Old Town area, but the draw are the beaches, where many come to socialise and provide for a friendly atmosphere, and some that are totally uncrowded.

Where else to see free-roaming animals in action than at the Amboseli National Park? The low-lying vegetation means that the impalas, cape buffalos, elephants, giraffes, lions and more are always on the move, along with the species of bird topping over 400. The park also has the glorious backdrop of neighbouring Tanzania’s Mount Kilimanjaro, the world’s tallest free-standing mountain in spectacular view.

Not all the allures of Kenya are within its plains areas. Africa’s second tallest peak, Mount Kenya, has three different summits that present climbs with certain degrees of difficulty. This mountain is an epitome of the diverse set of choices of adventures that are readily available in Kenya. People can go for a route up Mount Kenya that includes scrambling and hiking, while veteran climbers can opt for a journey that requires mountaineering skills.

Kenya is home to many different ethnic and cultural groups, with swathes of migrants who have helped shape the country. Possibly the most famous of these are the fabled semi-nomadic Masai people, who are known for their survival abilities and hunting expertise. But there are countless different tribes in Kenya, each with its own language, religions and other cultural practices.

And the wildlife discovery isn’t just for the landlubbers, snorkelling and diving is a rewarding experience amongst thebathtub-warm waters off the Kenyan coast. Take a jaunt to the Malindi Marine National Park and spot crabs, tropical coral, colourful fish, sea cucumbers, dolphins, turtles and more. The established sister marine park, Watamu, is a UN recognised World Biosphere Reserve that’s home to the endangered Olive Ridley turtles.

The Great Rift Valley is succession of lakes where flamingos arrive to create a near sea of pink, with a lake system that has one of the most diverse bird populations in the world and home to thirteen globally threatened species of bird. To the west of this line of lakes are the Tugen Hills, containing fossils preserved in lava flows from the nearby volcanoes going back from 4 to 14 million years ago, relics of human ancestors.

With all this overload of wildlife and beach-time, you almost forget about the nation’s capital, Nairobi. Kenya’s economic and political heart is a cosmopolitan blend of vivacious nightlife, top-class restaurants and shopping to suit everyone’s budget and taste. Many use the capital as a mere layover towards a safari or beach resort, this is a place that generously rewards those who give it a chance and uncover the daily goings-on within modern Kenyan life.

This all makes for fascinating encounters with Kenya’s finest wildlife. With the annual migration on land between the Serengeti and the Mara, leading to colossal herds of virtually every species, the migration of bird between the countless lakes within the Great Rift Valley is an untold gem. Birdwatchers will revel over the sheer variety, ecosystem and spectacle of a magnificent African wonder.

You could climb a mountain, lie on a pristinely white beach, enjoy the lively activity of the cities and towns, spot game amongst the plains & savannah, and learn about countless tribes and their way of life. Kenya really is like Africa all in one, with endless possibilities within her borders. With fabulously friendly people, when you step off that plane, you’ll always be greeted with “Jambo!” and a broad grin. This is the continents finest.

Reasons to Go on Safari in Kenya

Kenya is undoubtedly the Hollywood of safaris, and if you can stomach the paparazzi (in the form of legions of camera-wielding tourists), you’re in for a mind-blowing show. One of the major reasons to visit Kenya is to go on a safari.

Besides the fact that safari is a Swahili word…

Here are the top reasons you should go on safari in Kenya:

The quintessential open savannahs mean that, for much of the year, you can see for miles, which makes it easier to spot animals and affords excellent opportunities to watch not only the huge ungulate herds, but to witness the predators hunting them.

Kenya is a birder’s mecca, hosting over 1100 species of birds. That’s more than there are in the entire North American continent!

Of these birds, special mention must be made of the tens of thousands of lesser and greater flamingos that gather in the alkaline lakes of the Great Rift Valley and turn them from blue to pink. Best places to see this breathtaking spectacle would be Lake Nakuru and Lake Bogoria but, since the flocks move, make sure you get good local updates before you go.

The mystical forests of Mount Kenya and the Aberdares National Park provide a hauntingly beautiful setting for animals like elephant, buffalo and leopard, and are well worth a visit for those wanting something different on their safari itinerary. You might see a giant forest hog (that can weigh just under 300kg), the guereza colobus (one of the most beautiful monkeys in the world) and, if you’re really lucky, the rarely seen bongo.

There’s a reason why the BBC chose Kenya’s Masai Mara as the location for their television series “Big Cat Diaries”.  This is undoubtedly one of the best places in the world to watch the big felines in action. And some of the small ones too: it is not uncommon to find the majestic serval hunting the Mara’s grasslands. 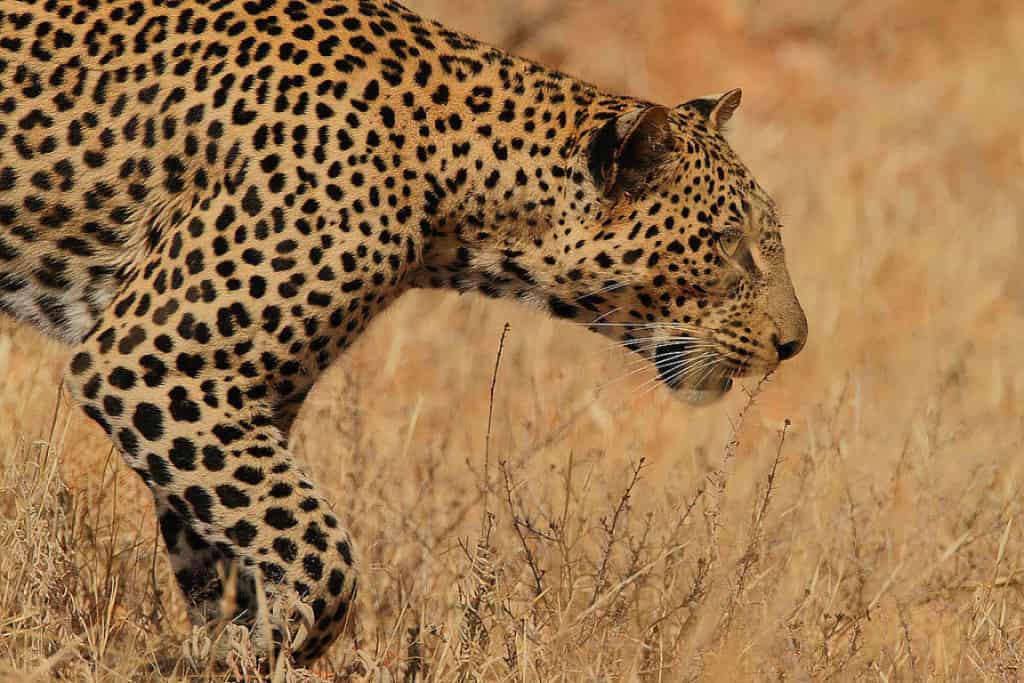 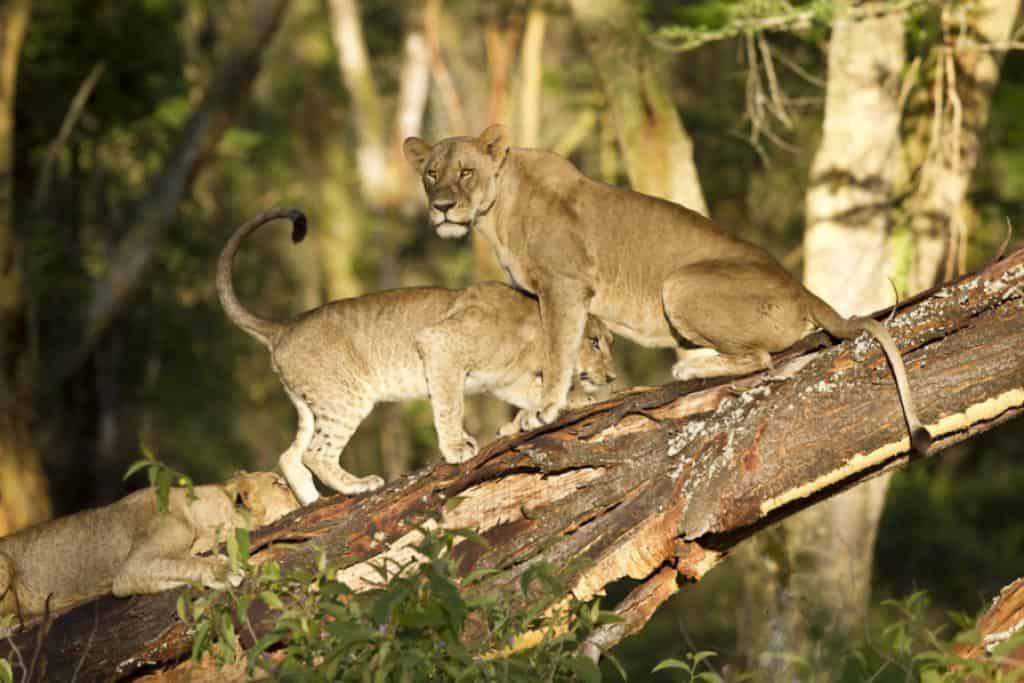 There are very few elephants alive that carry the ivory of the giants of the past.  But if you wish to see, arguably, Africa’s most magnificent bulls, Tsavo National Park should be on your itinerary.

This part of the country is not only incredibly scenic, with strong flowing rivers lined with palm trees carving through the semi-arid landscape, but it is full of special creatures you might not see elsewhere, like Beisa oryx, the striking reticulated giraffe, the bizarre gerenuk, and even a striped hyena.

Although the roof of Africa resides across the border in Tanzania, Kenya’s Amboseli National Reserve is the best place to try and get a herd of elephant and Kili’s snow-capped peaks in the same frame.

10. The greatest show on earth

This is a top bucket list activity and another one of the major reasons to visit Kenya. 1.6 million wildebeest, 250 000 zebra (and 450 000 gazelle) partake annually in this powerful movement of animals between Tanzania’s Serengeti and Kenya’s Masai Mara. But the Mara must surely be the most dramatic of all their obstacles. Witnessing the intensity of the herds plunging themselves into the crocodile infested waters should be on every safari lover’s bucket list.