When a chef like Rhot Ghal of Michelin acclaim goes it alone (well almost, he has a co-owner in front of house expert Abhishake Sangwan) and creates a restaurant in their own image, it begs attention.

The duo opened in 2018, withstood Covid and they are now thriving again offering Pan-Indian cuisine inspired by Royal Indian Expeditions.

The name Kutir is Sanskrit for “a small cottage in the middle of nowhere”. It’s a cute name but is a tad humble given that this is a stylish end of terrace townhouse in Chelsea just off Sloane Street.

Arriving at Kutir almost feels as if one is going to a dinner party with friends keen to impress. Indeed, the hallway has a very beautiful canopy of flowers overhead and eye-catching floral wallpaper. Throughout there’s plushly upholstered chairs, gold curtains, and chandelier lighting.

On the ground floor is a room with few covers and an ornate bar looking well dressed in a Massini fabric with wildflowers, butterflies and birds given added sparkle from Swarovski crystals.

It’s a small bar tended by their mixologist Sandar Nemeth who tells me his inspiration for his career choice came from watching Tom Cruise in Cocktail.

A flight of stairs leads to two more rooms and a small roof terrace that was created around a conservatory ceiling so that they could open in April. It is a lovely environment with floral artwork and artificial grass and it remains open for lunch or alfresco dining if the evening is warm.

This evening it was a little chilly so we took our seats at a small corner table from where we had the view of the lovely roof garden. I couldn’t help noticing the lovely print of tigers and elephants on the wallpaper which brought back memories of travels to the Indian Subcontinent.

It didn’t take long to realise that a huge amount of thought and creativity has been poured into the offings at Kutir with several menus to cater for your mood and tastes. There a £65 per person Expedition tasting menu which can be paired with their wines (add £55), and a thoughtful vegan version of it. There’s also an a la carte menu, which we opted for.

No Indian meal could possibly start without nibbling on popadoms. Appealing curly popadoms, both spicy and plain arrived. These were perfect for scooping condiments of mango chutney (with satisfying mango pieces), tomato sauce and yoghurt with turmeric.

We followed this with Allo Tikki starter, a popular street food of India, of potato cakes. Made with tamarind and potato and lentil mash, it is served with mint chutney. When I have had these in the past they crispy outside but ours were soft and smooth on the inside. They were served on a base of peas and pomegranate gems which gave a surprising tangy sweetness every now and again.

We also chose French cut chicken tandoori chops from the starter menu. Two chops were served on a bed of lentils. The meat was super soft on the inside and nicely charred on the outside and very spicy.

The two mains we chose were the chicken tikka masala with fenugreek, tomato and Kashmiri chilli (yes I am a traditionalist and am always drawn to this dish on a menu) and the venison green peppercorn. The venison is slow-cooked with fennel and yoghurt sauce. The meat was soft and well-cooked. The sauces for both dishes were unexpectedly mild and a stark contrast to the spicy starters.

We chose steamed rice and Aloo Sag as sides. The latter delivered gorgeous spinach but it was hard to detect the potato.

Kutir has a vast wine menu curated from around the world. However, as gin lovers, we decided to go for gin cocktails. After all the cocktail list was impressive.

We chose the Sariska and the Alphonso. The Sariska is a mix of Sipsmith London Dry gin, sweet vermouth, lavender syrup & bitter. The glass came decorated with activated coal on the outside, whose dark colour really showcased the green of the cocktail.

The Alphonso is a mix of Hapusa Himalayan Dry gin, which has a hint of mango in it, Indian tonic water and mango. Both were unbelievably delicious – thank you Sandar.

As we left were offered delicious pistachio cakes to nibble on. A stylish and delicious ending to a very pleasant meal.

Dining at Kutir is a quiet affair in small intimate rooms. This is Indian cuisine their way and the flavours are often quite surprising.

You can view Kutir’s menu here.

Expect to pay around £50 per head a la carte. 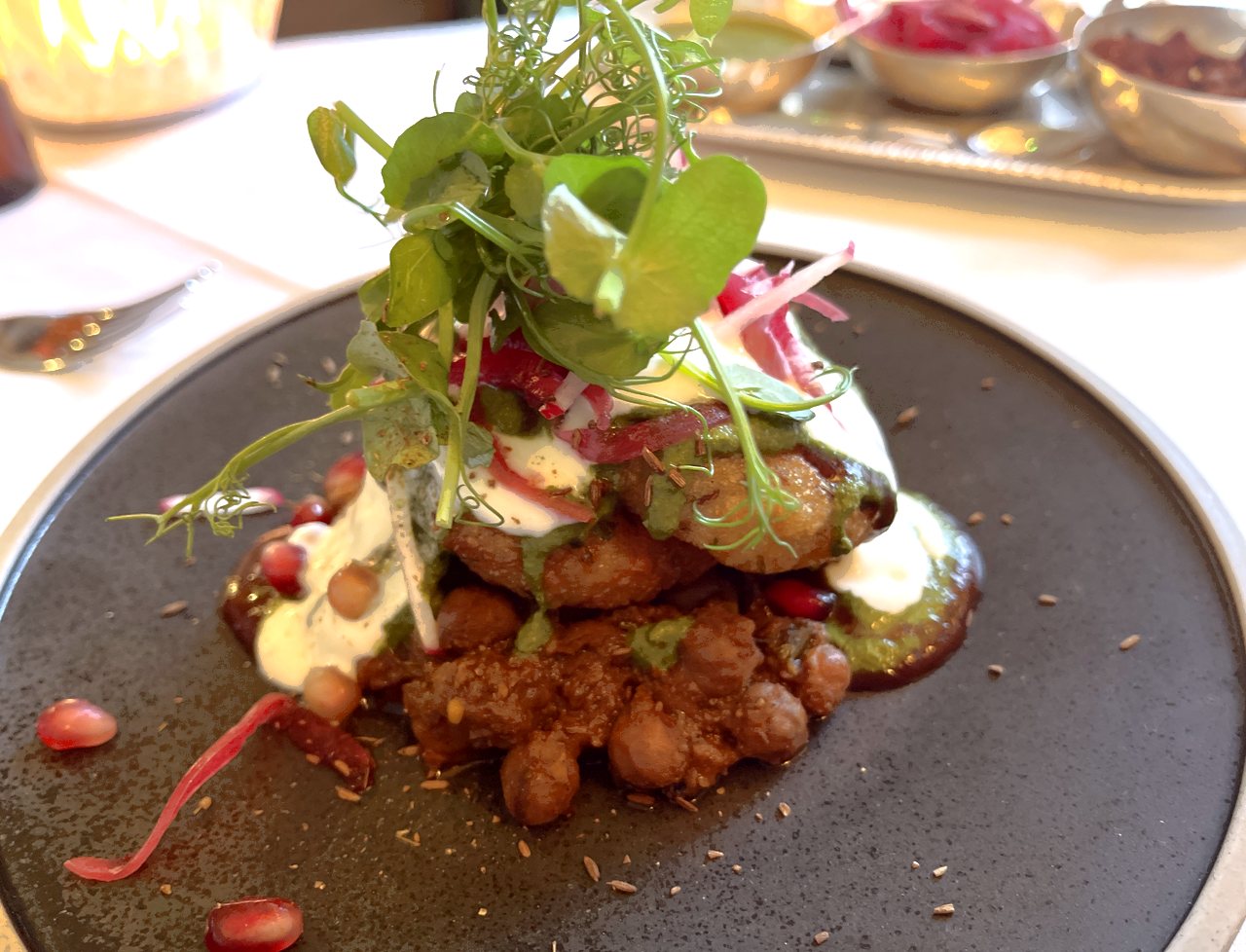 If I travel to the Thai island of Phuket under “Phuket Sandbox”, how soon can I visit the other islands?