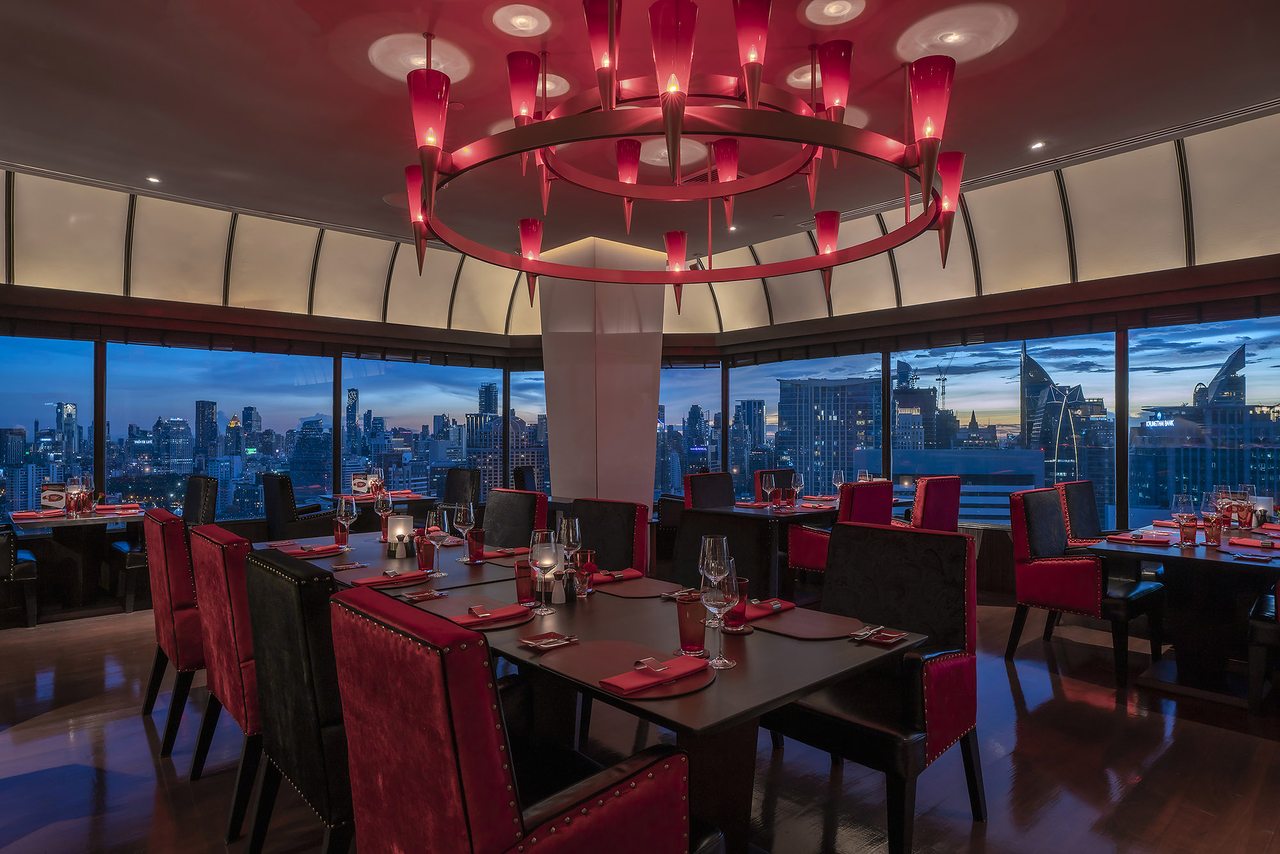 The Rib Room Restaurant and Bar in Bangkok is located on 31st floor of the Landmark hotel – a dining hot spot in the city with traditional cuisine and eye-candy views.

Located on the 31st floor of the Landmark Hotel is the Michelin-acknowledged Rib Room and Bar restaurant (aka RR & B) whose traditional style of creating well-loved French cuisine is fun if perhaps a little quirky.

With ceiling-height windows all around, we enjoyed traditional, often saucy French cuisine while enjoying far-reaching views of the city and the bustling Nana-Sukhumvit junction below.

There is a hint of gallic boudoir to the red and black decor, wood flooring and a stunning red chandelier. The team all wear matching red livery. It works well.

There’s an open kitchen also in “Ferrari” red and black, where the team, with Executive Chef Philippe Gaudal at the helm, prepares the food – generally steakhouse favourites. You can see the spit roast oven and the wood-burning oven, a rarity in this part of the world.

Table-side cooking allows for some theatrics as we watched them making the sauce for the Ceasar salad and the Steak Au Poivre and the Crepe Suzette, and the burst of flames when alcohol was added to the mix.

We started with Crisp romaine Ceasar salad cloaked in a creamy anchovy-lime-and-garlic-infused dressing, with a sprinkle of Parmesan and a drizzle of crusty croutons and crispy bacon for a nice crunch. We watched as the sauce was made in front of us. We ordered the Pate en Croute “Perigord too, a duck, truffle and Foie Gras served with homemade pickles. Both were glorious. 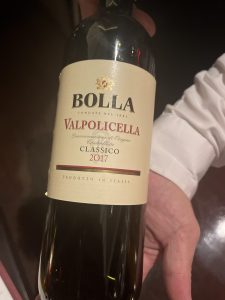 Mains were Steak au Poivre a la creme made with black peppercorns and cream sauce, cooked tableside with theatrical flair. The beef was tender and though the sauce had its own “look at me” personality, the texture of the beef spoke for itself.

I opted for the slow-cooked chicken breast with parmesan, gnocchi, roasted baby onion and chicken jus. Both were perfectly executed.

Though we kicked off with a gin and tonic, there is an extensive wine list. we washed down the main courses with an Italian Bolla Valpolicella Classico 2017,  a red that hails from the Veneto region of northern Italy.

This wine turned out to be a great accompaniment. It offered notes of cherry, raspberry, and red fruit that went well with the pepper steak and even though a school of thought says red wine is just for mean, I disagree as this went well with my chicken.

So, my favourite part of any meal is dessert, and what a show. We watched as the Crepe Suzette was created, complete with flames and plenty of sizzles. This is a classical flambe dessert that gave out sweet and slightly sour citrusy flavours served that contrasted well with the sweetness of the vanilla ice cream. A great combo.

The Grand Marnier Creme Brulee may not have the same grand entrance, but it did have magnificent orange flavours, with custard cream and a medley of berries.

Verdict: The Rib Room Restaurant and Bar is a blast from the past cuisine, in an environment that conjures a sultry past, while you gaze over the night lights of Bangkok. I suggest you get your glad rags, it’s a good night out.