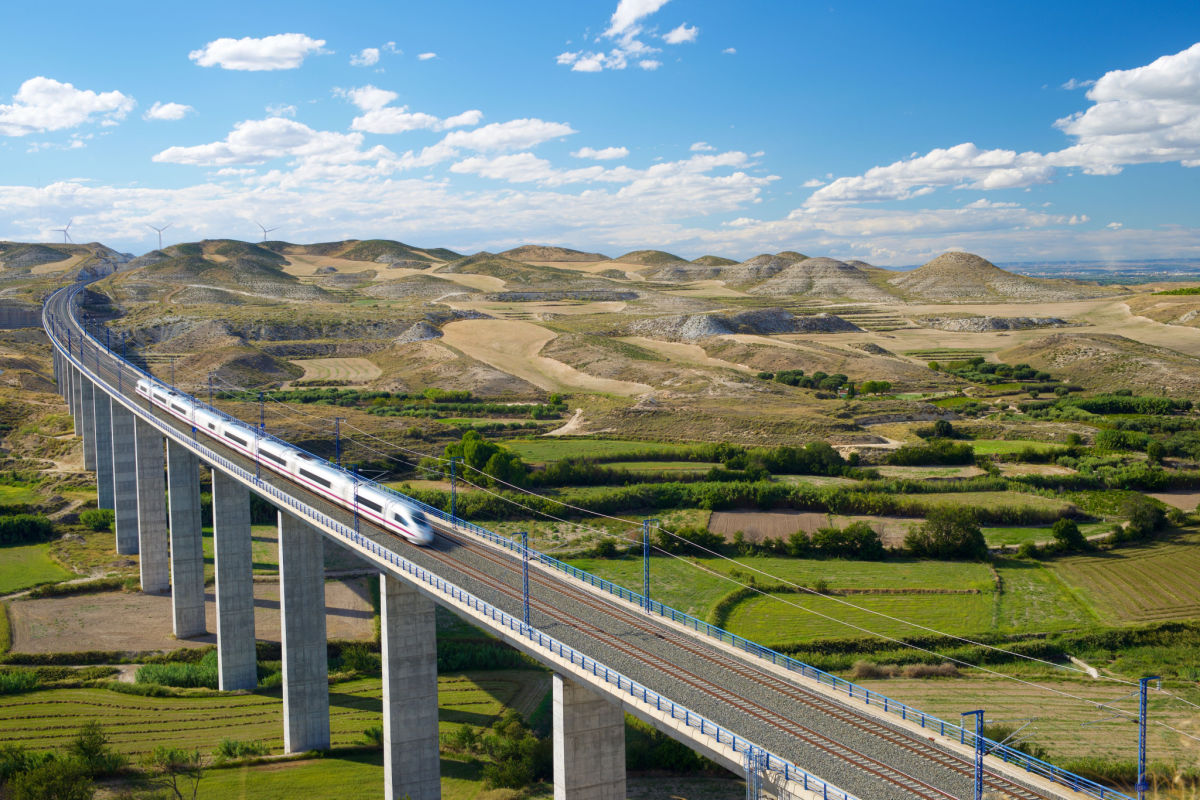 Spain Is Now Europe’s Rail Capital: Here’s How To Get Around On Its Train Network

The world’s most populated country, China, holds the title for the world’s largest network of high-speed railways (around 23,500 miles), but you might be surprised by which country takes the second spot – Spain. Representing over 10% of China’s network, the country has just added a third fast train operator to its system, which has further cemented its spot as the number one longest rail network in Europe.

The introduction of the high-speed rail service, “iryo,” will make Spain’s rail network even cheaper and faster. With its trains running up to speeds of 223 miles per hour, high-speed trains have increasingly become an aggressive competitor to airlines and have been known to assist in sending national airlines broke, such as what happened in Italy with Alitalia. Spain’s new network will run operations between Madrid, Barcelona, and Zaragoza, with later routes being announced in mid-December and next year, including Madrid, Cuenca, and Valencia.

“It is great to see how commercially driven Open Access services – such as iryo — are making long-distance rail more attractive and winning travelers away from less sustainable transport modes, namely airlines and cars,” said Nick Brooks, secretary general of the Alliance of Passenger Rail New Entrants in Europe.

Where Can I Travel By Train in Spain?

Train services operate across all of Spain’s major towns and cities, meaning you’ll be able to travel by train to your favorite destinations without the hassle of short flights. You’ll be easily able to visit top locations such as Barcelona, Madrid, Valencia, Seville, Malaga, Pamplona, Santander, and Santiago de Compostela, all in a matter of hours.

Are High-Speed Trains Cheaper Than Flights?

When comparing mid-December availability for trains from Barcelona to Madrid, tickets for iryo start at around €30 (U.S. $31). The trip time is around 2 hours and 45 minutes, while driving would take 6 hours. Renfe is the more expensive option, with tickets ranging from around 50 to 120 euros (US $52- 104) for a basic fare, although you can grab some cheaper tickets if you book an early morning time; or you might meet the conditions to travel on Renfe for free, which is an initiative to lure tourists and help relieve residents up until the end of 2023.

When compared to flights within the country, the national airline Iberia offers flights in December for around US $50, which takes under 1 hour and 15 minutes. When you factor in additional transport costs getting to the airport, plus the time arriving at the airport before boarding, the train and air end up being similar in time duration, with select services being a quarter of the cost.

If you’re going to be taking multiple routes in a period, it’s recommended to grab a travel pass to save some money. Renfe offers travel passes for non-residents starting at 195 euros (US $203) for 4 trips, or you can grab a Eurail pass starting at U.S. $170 for 3 travel days in one month.

What’s The Process For Booking Tickets?

Like airlines, you will need to reserve your ticket even if seating is not allocated, so don’t expect to just turn up. Train companies also come with different classes with different fare options and comfort levels (keep reading below to see how these fares are applied).

You can buy all tickets either online through your desktop or mobile at the individual train company’s site with no booking fee, but keep in mind some of the sites have some confusing translations. Currently, on iryo’s website, you need to use the Google translate option with your browser, and some sites are known to have issues accepting international credit cards.

There are third-party sites, which are much easier to use, but these do take a small booking fee. These include thetrainline.com, raileurope.com, omio.com, and petrbax.com, which all connect to the train lines’ ticket systems and will provide your ticket for boarding.

Depending on which train network you take and the class of ticket, traveling by train can be similarly compared to an airport, except the seats are a little larger, and you have options with tables and seats facing each other for groups. You can also walk around the train whenever you feel like it, and trains are typically on time in comparison to flights. Most trains also have a silent carriage, so the experience can be as peaceful and relaxing as you choose while you gaze at Spain’s beautiful countryside.

On Renfe trains, they offer two different seat types; a standard seat and a comfort seat (which means more space) with Basic, Choice, Comfort, and Premium fare types. They all differ in benefits, such as access to the club lounge, seat selection, unlimited changes, and complimentary food and drinks. All tickets include Wi-Fi, 3 items of luggage, audio and video on board, a café, and a silent train carriage. Renfe also offers an overnight sleeper train, which connects you to cities such as Madrid (Spain), Barcelona (Spain), and Lisbon (Portugal).

Iryo trains have a focus on customization and flexibility and offer two seat types and four classes of travel — Inicial, Singular, Singular Only You, and Infinita. Targeted more towards business travelers, the trains are all fitted with individual USB and standard power sockets, armrests, and free 5G Wi-Fi. They also offer an onboard bar and a menu consisting of seasonal ingredients and prepared-to-go healthy options.