If you’re the sort of safari-goer that loves the solitude of being in the bush, with all the right wildlife but without too many tourists around, then we have just the spot for you – and it’s perfectly placed if you want to link Tanzania’s northern circuit with Zanzibar. By Phil Clisby

Often overlooked in favour of Tanzania’s more prestigious reserves, the little-known Mkomazi National Park boasts a startling array of wildlife – including the Big 5, more than 20 species of ungulates and some 450 species of birds. It is also a vital refuge for the endangered black rhino (which are protected in a secure private sanctuary) and the African wild dog.

And with park fees at just US$30 a day, it is a much cheaper alternative to other parks on Tanzania’s northern circuit.

Why you should visit

The 3245 sq km Mkomazi is one of Tanzania’s most recently established national parks – having been gazetted in 2008 – but is still seldom visited, “making it an absolute gem for those seeking true wilderness experiences”, says Emily Liebchen, country manager for Authentic Tanzania Safaris, who offer fly camping in the park.

Mkomazi’s location – 112km east of Moshi – means it is well situated as a bridging point between the northern and southern safari circuits. Visits here are also easily combined with hiking in the Usambara or Pare mountains and a few days relaxing on the beach in Pangani or Zanzibar.

While it feels remote, Mkomazi is easily accessible by road or air. And with only a few hundred visitors each year, you can truly feel like you have the place to yourself. Indeed, when I visited, ours was the only vehicle in the park.

“If you´re tired of the sound of engines overpowering the roar of the lion, Mkomazi might be the place for you,” says Runar Larsen, a photojournalist with Norway’s Reislyst magazine.

“This is a different kind of adventure, away from the traditional circuit. Unlike in some other parks, animals here are infrequently exposed to humans, so their shy behaviour might be considered more natural than you might find in places like Ngorongoro and Serengeti.

“Mkomazi is wild and vast – a great place to get away from it all, while you can still find yourself in the centre of dramatic animal encounters at the same time.”

While you may not see as many animals on a game drive as you would in Tanzania’s more-renowned parks, you will be well rewarded out of the vehicle.

“What makes the park most special is the wildlife you will see on foot,” says Liebchen. “It’s a fantastic walking safari destination – possibly one of the best in Tanzania, especially given the lack of cars in the park.”

Twenty years ago Mkomazi was, according to travel writer Brian Jackman, “a clapped-out game reserve on the point of collapse”, having suffered from poaching, illegal hunting, deliberate burning and overgrazing. Today, thanks to concerted conservation efforts, the park is, says Jackman, “a magnificent wilderness”.

In the late 1980s poaching had all but wiped out the park’s black rhino and elephant populations. At one point, it was feared that the reserve might be de-gazetted and released for subsistence agriculture. However, thankfully, the Tanzanian government reviewed Mkomazi’s status and committed to rehabilitating the area and reintroducing lost species. The reserve was given National Priority Project status and the rest, as they say, is history, culminating in it being granted full National Park status in 2008.

The name ‘Mkomazi’ comes from a combination of two words in the local Pare language: ‘mko’, which is a traditional wooden spoon and ‘mazi’ meaning ‘water’. The implication being that the amount of water found in the park is barely enough to fill a spoon. This is “classic dry-country”.

The Usambara and Pare mountain ranges that flank the park’s southern border form an imposing barrier to interlopers, while more than half of its northern frontier is a step away from Kenya’s Tsavo West National Park, allowing Mkomazi a share in the rich wildlife pickings of its neighbour, including some 12,000 elephants, as well as migratory herds of oryx and zebra. Together with Tsavo, Mkomazi forms one of the largest and most important protected ecosystems on Earth.

Mkomazi sits at the southern tip of the Sahel zone (the semi-arid region between the Sahara to the north and the humid savannahs to the south). Its southernmost part is littered with acacia trees. As you approach the mountains the vegetation changes to dry upland forest, while on the plains you will find bushy grasslands.

Birdlife includes hornbills, weavers and vulturine guinea-fowl – which are all found in large numbers – martial eagles and violet wood hoopoes.

The park is also home to a private rhino sanctuary and a wild dog conservation project. The Tanzania National Parks Authority is hoping to open its rhino feeding station to visitors, but at the time of writing the date for this had yet to be confirmed.

After starting out as a bush mechanic, Rashid Toboke gained experience as a boat driver and then a safari guide in the Selous, before joining Authentic Tanzania Safaris in 2014. He follows the operator’s fly camp as it moves between Selous, Ruaha and Mkomazi.

He recalls a particularly moving experience while camping in Mkomazi: “We set up camp in the late afternoon, pitching the tents near water. In the middle of the night, about 20 elephant came down to drink. It was a wonderful encounter and the guests were so excited to be around these surprisingly silent giants – they had a great view, right from their tent.”

The park has a semi-arid climate, with the long rains occurring from March to May, while the shorter version falls from November through December. Temperatures range from 16°C (at night) to 30°C, with July and August being the coolest months.

The best game viewing is during the dry season, from June to October – the vegetation is thinner and the animals tend to gather around the waterholes. For lovers of scenery, however, views of the mountains are best during the wet season – November to May – and the landscape is a lush green.

While birdwatching is good all year around, November to April tends to be best as migratory birds from northern Africa and Europe can be seen.

The best way to access the park is by road. The main entrance – Zange gate – lies 6km from the town of Same, which is on the main Arusha–Dar es Salaam highway. Alternatively if you are coming from the Usambara, Kivingo gate is a 1.5-hour drive from Mambo View Point.

Charter flights can be arranged to the Kisima airstrip, in the park itself.

The only permanent accommodation inside the park is Babu’s Camp, located 11km from the Zange gate. It houses five large safari tents with en suite facilities.

For those with their own camping gear, there are several public campsites available.

For a more adventurous, remote experience, companies such as Authentic Tanzania Safaris offer fly camping – set up on demand for private groups.

In Same, 6km from the park’s main entrance, you will find a number of campsites, lodges and guesthouses. The nearest to the main gate –15-minutes drive away – is the budget Elephant Motel.

Phil Clisby visited Mkomazi on a self-drive trip with Tanzania Unravelled (www.tanzaniaunravelled.com). For more information or to make a booking, contact your local tour operator. 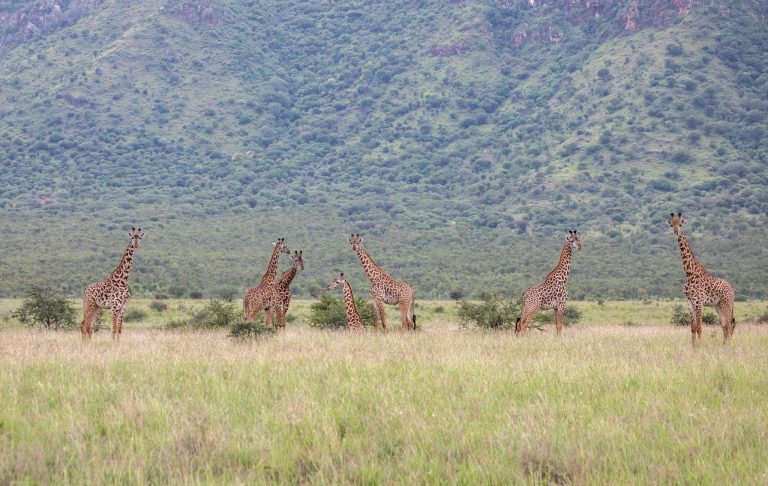 Discovering the Natural History of Trinidad and Tobago