Capri is a mere half-hour’s ferry or hydrofoil ride away from Naples.

This beautiful island is synonymous with stars, style and impossible glamour but, away from the central Piazzetta, it’s also a place of stunning natural beauty and calm.

Charles Dickens once wrote ‘In no place on earth are there so many opportunities for delicious peace and quiet as on this small island’. It’s gained in popularity since Dickens’ time, but to enjoy the best of both worlds…

Here are ten of the best things to see and do to get the best from the island Capri:

When you step off the ferry at the port of Marina Grande, cross the street and take the funicular straight up to Piazza Umberto I – better known as La Piazzetta – the heart of Capri. It’s a tiny square but always bustling, with every seat of the four bars packed to the rafters, and the perfect spot for people-watching.

You’ll need to pay for the privilege though; there are four café bars on the Piazzetta and there isn’t much between them in terms of prices and what they offer, so I’d choose the one that you like the look of and grab a seat. The bars are all open until about 2am so, as long as the money doesn’t run out, you could spend your entire evening watching what Norman Douglas described as “the world’s little theatre”.

The Piccolo bar is the oldest of the four and benefits from an upstairs bar (handy if you’d rather “see” than “be seen”). Tiberio (closed November) is popular with young Neapolitans, the Gran Caffè is usually popular with tourists and Bar Caso serves great granite (drinks over crushed ice).

One of the loveliest ways of experiencing the beauty of Capri is out at sea, away from the crowds. There are boat and tour companies that can arrange everything from a speedboat transfer to another island (or back to Naples), a trip to Positano or La Grotta Azzurra (the Blue Grotto, see below), or finding a quiet cove to drop anchor and have lunch in.

You can have a skipper for a day (or half day) or hire your own boat. Bring lunch, swimwear, plenty of water and suncream.

It’s commercial alright but there’s no doubting how pretty the iridescent blue water of the grotto is, and the trip there is fun too. Discovered in the time of Tiberius, the place was initially thought to be haunted by evil spirits and so was avoided; it was rediscovered in the 19th century and since then has become one of Capri’s most popular attractions.

When the weather is fine a small rowing boat will take you into the grotto (you’ll need to lie down in the boat as the opening is very narrow) and, thanks to reflecting sunlight, the water appears to take on the colour of sky. If you’re lucky, your boatman might even sing you a song so that you can experience the wonderful acoustics.

The grotto is about 10 minutes by boat from Marina Grande.

To really appreciate the beauty of this little Mediterranean island, take a walk along a coastal path.

The perimeter covers a distance of 17 kilometres and you can gaze out over the twinkling turquoise sea and admire the natural beauty, the Faraglioni islands and appreciate the quiet away from the crowds.

5. Have lunch at Il Riccio

The beachside restaurant of the Capri Palace Hotel on Anacapri is open to the public, so a wonderful way of enjoying a bit of luxury without the price tag of the hotel. Simple seafood salads, delicious pastas and the freshest fish accompanied by gentle sea breezes and spectacular views.

There’s no way to avoid the shopping in Capri. From the Piazzetta the narrow streets in every direction are filled with the names of Dolce & Gabbana, Prada, Fendi and Valentino, but don’t forget the artisans.

The legend goes that in 1380 the head of the monastery made a flower arrangement in honour of the arrival of Queen Giovanna d’Angio; he forgot to change the water for several days but discovered that it had created a wonderful fragrance. Then there is the historical fact, which states a perfume recipe was discovered in 1948 by one of the monks and he was given permission to create a small laboratory for its production. Who cares?

The perfumes are delicious, some made with essence of rosemary picked from Monte Solaro or citrussy lemon (men’s) while others are made from the Capri wild carnation (women’s).

Take a seat for views of Capri from the top of the island. The highest point of the island is 589 metres above sea level and although it is possible to walk there, the quickest (around 15 minutes), easiest and most fun (unless you suffer from vertigo, which, I have to confess, I think I do) is to take the chair lift.

For those who aren’t afraid of heights you simply jump on a chair and it whisks you up to the top of the island giving you fabulous views over the entire island. You can take the lift down again or wander down at your own pace – the descent will take around 40 minutes.

Axel Munthe came to Capri in 1876 as a young man. When he found a little peasant cottage and ruined chapel on a clifftop at the top of the Scale Fenicia he decided that he would turn them into a ‘place for the soul’. As well as being a beautiful place full of light, it also houses Munthe’s collection of art, archeological treasures and a sphinx that looks out over the sea.
The views from the terrace are spectacular.

Concerts and cultural events are held in the evenings in the chapel or the gardens of the villa, with tickets costing around 15 euros (5 euros for under-18s and students).

This is the pretty Capri beach where the sirens tried to seduce Ulysses. Half the fun is getting here… you could take a bus or taxi but really the best way is to walk along Villa Krupp where you can drool over your destination all the way down. There are precious few Capri beaches that are sandy and Marina Piccola is no exception – but don’t let the pebbles get you down, the sea is fabulously clear.

Unless you’ve anchored off your own little beach cove, sunbathing is an expensive business; Marina Piccola has several bathing establishments and each will charge for sunbeds, deckchairs and umbrellas – but you do get to make use of the bathroom facilities and showers, and you can hire a beach hut (or cabana) to store your clothes while you go a-dipping.

There are those who wouldn’t be seen dead on the Piazzetta (“far too touristy darling”), but they might be found hanging out at a few of the more chi-chi hotel bars such as Quisi, the terrace bar of Grand Hotel Quisisiana (Via Camerelle 2; 081 837 0788, www.quisisana.com).

Then there are the clubs: tucked down a street off the Piazzetta, the best known of the clubs is Anema e Core (Via Sella Orta 39/e; 081 837 6461; www.anemaecore.com). The name means ‘soul and heart ‘ and was the brainchild of Guido Lembo. While it’s not so much a place for dancing or eating (no food is served), patrons seem happy enough sitting at tables and having a drink while enjoying the bands (though rumour has it that there is occasionally a bit of dancing on the tables when the crowd gets over-excited). It’s open until 3am and reservations are advisable.

The newest kid on the block is Panta Rei (Via Lo Palazzo 1; 081 837 8898; www.pantareicapri.it). The rather high-brow name comes from Heraclitus’s philosophy ‘everything flows’, and it certainly does, as the complex seems to expand year by year. On my last visit, Panta Rei contained a restaurant, bar and spa area with pool. The idea was by realised by owner/architect Massimo Esposito (who also designed Villa Marina, the newest 5-star hotel on the island). The place opens for business at around 7pm – when funsters arrive for aperitifs and to listen to lounge music, or head to Panta Gusto for dinner – and doesn’t close until 2 or 3am. 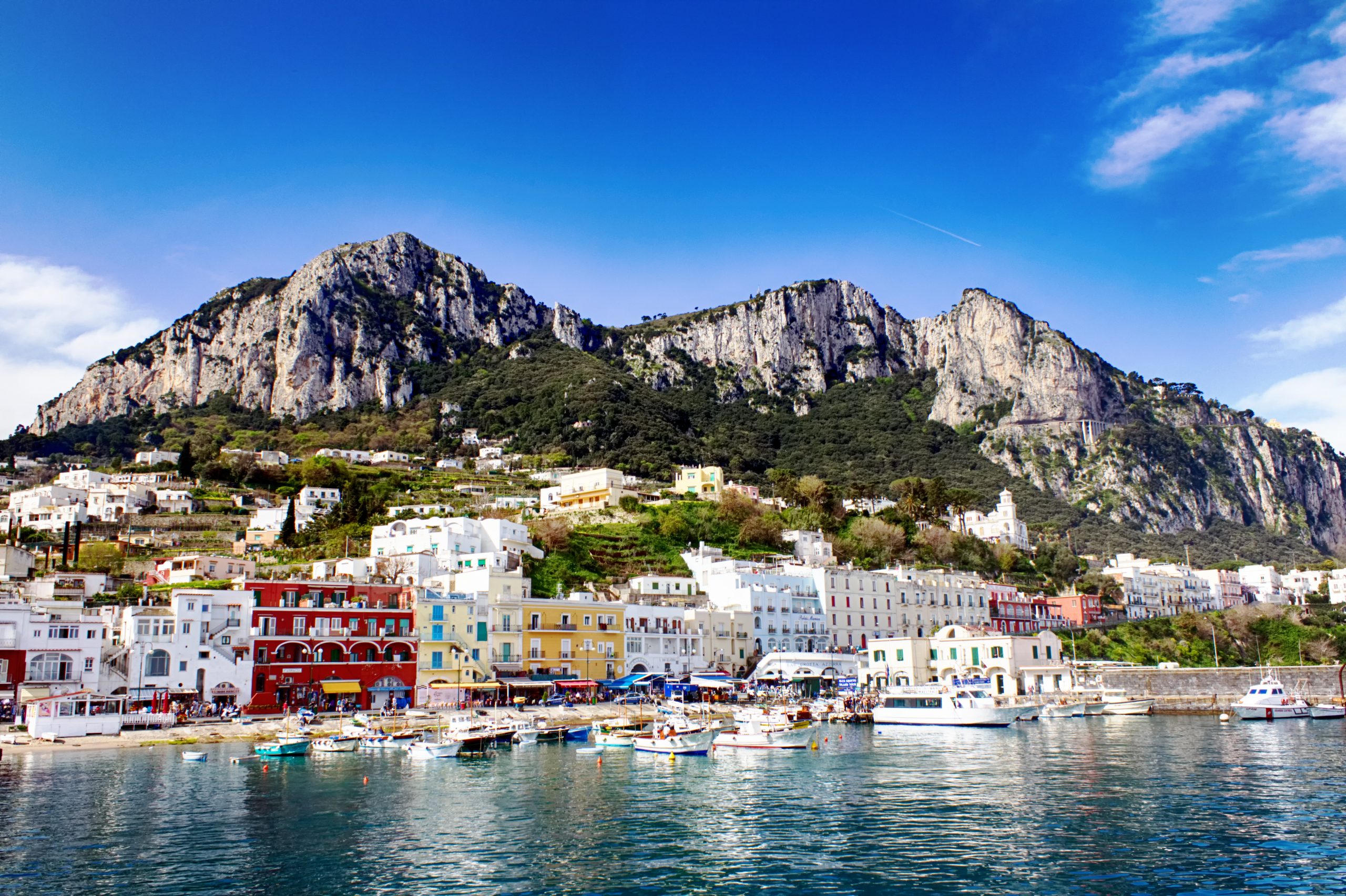 All tastes are catered for in Cape Town!