From November, The Elephant Queen will be available on the new Apple TV+ service. To find out how the most remarkable wildlife film of recent years came together, Brian Jackman spoke to the filmmakers, Mark Deeble and Victoria Stone

For more than 30 years, Mark Deeble and Victoria Stone have been making award-winning wildlife films in Africa; but their latest venture is on its way to being the most successful yet.

It took eight years to complete The Elephant Queen, including 1,080 filming days spread over four years on location, and involved 1,200 hours flying time in a four-seater Cessna while trying to locate elephants in the vastness of Kenya’s East Tsavo National Park. To get the shots they needed involved flying at times through dust storms, thunderclouds and torrential rain, as well as months spent in a cramped steel box below ground, filming elephants at toenail height as they came to drink.

It has been made at a time when 30,000 elephants are being killed every year to fuel the illegal ivory trade. The poachers’ main targets have always been the male elephants that carry the heaviest ivory, with the result that Africa’s legendary giant tuskers – bulls with tusks weighing over 100lbs apiece – have been almost wiped out.

Today fewer than twenty survive, of which a dozen live in Tsavo. As if to underline their vulnerability, Satao, the iconic tusker who features in the film, had the largest tusks in the world when he was killed in May 2014.

“The main aim behind the film was to make people fall in love with elephants in an unashamedly March of the Penguins way,” says Mark. “It’s a cinematic love letter to a species on the verge of extinction, whose leading lady is Athena, an elephant matriarch who does everything in her power to protect her family in a true story of love, loss and coming home.”

At the same time he and Vicky wanted to show an audience that elephants don’t live in isolation. “Living around them and sharing their waterholes are all kinds of other creatures, such as the bullfrogs that can survive a year underground without food or water.”

They could have filmed in Amboseli or Samburu, where finding elephants would have been much easier, but only Tsavo offered the range of bullfrogs, foam-frogs and other smaller characters they wanted.

Above all, they chose Tsavo because of its last tuskers, bulls with tusks so big they almost touched the ground, whose elusive presence took them back to the older, wilder Africa that once was.

“We knew finding, tracking and filming them would be difficult,” says Mark. “We just didn’t know quite how difficult.”

When filming began the team were based on Taita ranch, an area adjoining Tsavo National Park. Then poachers moved in and began targeting elephants at the waterholes where Mark had set up his camera. As a result the elephants became wary and aggressive. Some of the biggest bulls only emerged from deep cover at night to feed, and some matriarchs were so defensive that they would charge on sight from hundreds of metres away.

Under these conditions filming became impossible and their position became untenable when poachers attacked a vehicle of unarmed community rangers only 600m from camp. Two rangers were wounded, one of whom died while the film crew were trying to fly them to hospital. Fearing they could be next in the firing line, they decided to relocate to a new and safer camp 50 miles away inside Tsavo East National Park.

Here the elephants were much more approachable – to the point where they regularly walked into camp to trash the bucket showers and even damaged the crew’s two precious Cessnas.

Editing in the field also presented its challenges, as Vicky discovered. Scorpions and venomous centipedes liked to live in the dark recesses of the equipment cases. Ants built their nests in computers and rodents bit through electric cables, causing power outages on a regular basis.

It was not long after they had moved to Tsavo East that they found Athena, their leading lady. For nearly two years they had been looking for the right elephant family to film.

“What we wanted was a family led by a matriarch who we could hopefully find on a regular basis,” says Mark, “but in the end it was she who found us.”

Driving back one day after another fruitless search, they discovered a magnificent matriarch and her family sleeping in the shade of a tree just behind the camp kitchen.

“It was so serendipitous,” says Vicky. “It was love at first sight and we knew we had found our star.”

Only later after they had begun filming her did they discover she was 50 years old and had the largest tusks of any of Tsavo’s matriarchs, marking her out as a prime target for the poachers and making her presence all the more poignant.

The film opens with a thunderstorm that fills the waterholes in the Elephant Queen’s realm, setting the stage for her close-knit family and the smaller characters that live in her shadow. For them all, the gift of rain transforms Tsavo into a green paradise, but it won’t last forever. When the dry season comes, Athena must leave the waterhole and lead the herd on an epic journey that will test her leadership to the utmost, revealing the extraordinary qualities of a species whose lives so closely mirror our own, but who could be gone from our planet in a generation.

In September 2018 The Elephant Queen was selected for its international premiere at the Toronto Film Festival, where it was snapped up by Apple, the first live action feature they bought, ensuring a high-profile roll-out as Apple TV+ headed for launch, both in cinemas and all the other Apple platforms.

Since then it has continued to gather accolades from all quarters including Sir David Attenborough who said: “I have no doubt that The Elephant Queen will stir the conscience of all who see it and bring valuable support in the battle to save these majestic creatures.”

There is a small personal back-story behind the making of this film, which is why its success means so much to me, writes Brian Jackman.

Mark and Vicky’s mentor was the late Alan Root, Africa’s finest wildlife filmmaker, and it was me who brought them together. I was a journalist on The Sunday Times and had been writing about Africa for ten years when they came to see me, wanting to know how they could break into the business. I suggested they should fly to Nairobi and meet him, and in 1986 that is exactly what they did.

“Alan was a filmmaker’s filmmaker,” says Mark. “He combined a sharp intellect and a need for adrenaline-fuelled adventure with a knowledge of African natural history that was unparalleled.”

Mark and Vicky had already embarked upon a career of filming underwater when they met him, but Alan was persistent: “Come on guys,” he told them. “You’ve got to evolve; crawl out onto land. It’s been done before.”

The rest is history and The Elephant Queen is dedicated to his memory. 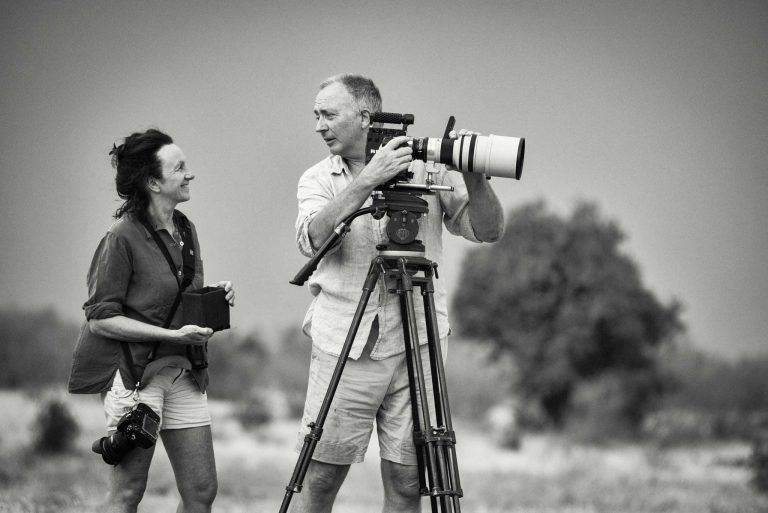 How to Extend Your Travels and Your Wallet