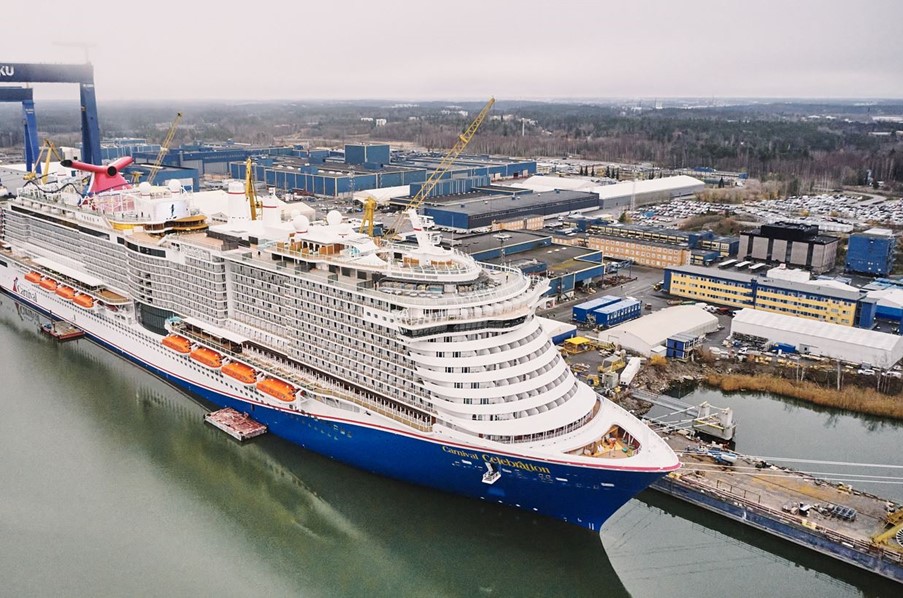 The Mardi Gras’ sister ship, the 182,800-gross-ton, was built in Meyer Turku (Finland) and is part of a bigger platform of LNG-fuelled cruise ships that Carnival Corporation is building for AIDA, Costa, P&O, and Carnival Cruise Line. A sister ship, the Carnival Jubilee, is currently being built at Meyer Werft in Germany, making this vessel the second of three in her class for Carnival.

“We have many reasons to celebrate now that Carnival Celebration has joined as the 24th ship in our fleet. Now, more guests will experience all that our innovative Excel class has brought to cruising,” said Christine Duffy, president of Carnival Cruise Line, at the handover ceremony. As the culmination of our 50th birthday celebration, she also serves as a beacon of hope for the years to come.

The cruise ship is 1,130 feet long and can carry a maximum of 6,465 guests in addition to its 1,735 crew. While in Finland for the handover ceremony, she was legally transferred to the Bahamas registry and sailed out to Southampton, England, to begin her maiden voyage to her permanent port of call in Miami, Florida. There will be a christening ceremony on 20 November in Miami before she sets off for the Caribbean on 21 November. She joins her sister ship Mardi Gras, which sails out of Port Canaveral, Florida, as the first LNG-fuelled cruise ship to be homeported in Miami. The Carnival Jubilee, the third ship in the fleet, is expected to start operating out of Galveston, Texas.

The Carnival Celebration is identical to her sister ship in that she features six unique “experience” areas based on various themes. A vast, three-story glass atrium houses numerous restaurants and entertainment venues. The BOLT roller coaster is one of the attractions available. One of the unique rooms is a tribute to the cruise line’s 50 years in business and features authentic reproductions of furniture and fixtures from the line’s previous ships.

With the retirement of the Carnival Ecstasy, the corporation has decommissioned six of its older cruise ships from the 1990s Fantasy class, each with a total tonnage of 70,000. In order to capitalise on Carnival Cruise Line’s revival and expansion of its Caribbean operations since restarting service following the pandemic, the company has added the Carnival Celebration. The company’s chief executive officer, Josh Weinstein, recently updated investors on the cruise line’s success, stating that it will build on it by shifting additional ships to Carnival Cruise Line.

As part of Carnival’s efforts to resume operations in Australia, the first of three Costa cruise ships to join the line recently arrived in the country. The rechristened Carnival Luminosa, a 92,720-gross-ton cruise ship that first set sail in 2009, will spend her time cruising between Australia and Alaska. She will carry 2,826 passengers. Ships of the Carnival Cruise Line were sold off for scrap, and she was sent to the United States to take their place.

In addition, in 2023, Carnival will introduce a new brand called Costa by Carnival, which will see two of the latest ships from the Italian line renamed and deployed in the American market, setting sail from New York in 2023 and California in 2024. These ships were specifically designed for the Chinese market as part of Costa’s repositioning efforts after the cruise line stated it was restructuring its operations in Asia in response to China’s continued restrictions related to COVID-19.