Although one of the smallest countries in Europe, Luxembourg has hundreds of kilometres of signed walking trails, including the long distance GR5.

50 years ago, I walked from Belgium to Switzerland following the European long distance GR5 trail. I fondly remember one of the highlights was the section traversing the length of Luxembourg so it was time to retrace my footsteps.

Unfortunately I don’t have time to complete the entire journey but settle instead for the southern half. I do spend a day in northern Eislek region, just to remind me of its lush forests, green hills and deep valleys.

This walk is the final part of the Escapardenne Lee Trail which is around 32 miles and takes three days. The early morning mist is still hugging the hill tops when I leave my camp site in Kautenbach, The first section climbs steeply up through forest, the trail well signed and clear. There are clear views of the River Wiltz below, which I follow until diverting north east into forests of pine and oak.

The landscape is all rolling hills and, after rather too many steep up and downs, I reach the small village of Hoscheid. From here, I almost double back on myself, following a long ridge to reach the River Sûre. It’s then a long descent to the village of Goebelsmühle where the Sûre meets the Wiltz. Although it’s the end of my walking today, I catch two buses cross country to the small village of Berdorf where I spend the night.

I’m now on the GR5, following in my footsteps of 50 years ago. This is the Mullerthal region, known as Luxembourg’s Little Switzerland, because of its distinctive rock formations. Great slabs of stone, resting against each other, include an amphitheatre, deep caverns and the impressive Gorge du Loup. Here the narrow path is hemmed in by stratified rock walls and emerges with a view of the town of Echternach below.

The bells of the huge abbey are ringing to celebrate Ascension Day and once again I meet the River Sûre. I follow it for a mile before climbing into the forest, passing the outskirts of Rosport where there’s Musée Henri Tudor, He invented the lead-acid battery and sadly died of lead poisoning 40 years later. After more forest walking I reach the church at Girsterklaus and descend to Hintel, my destination for the night.

To get back on the GR5 I will have to retrace my steps so catch the bus to Wasserbillig where I meet the River Moselle and its surrounding vineyards. After a couple of miles by the river, at the port of Mertert I strike up into the countryside on a minor road. There’s nobody around apart from the occasional farmer and there are splendid views over the river.

After a woodland stretch I arrive at the village of Manternach crossing a stream, before climbing up again to a broken dolmen. The Groensteen, as it’s known, may have marked the grave of a Gallic warrior. From here I enter the forest before emerging at vineyards, clinging to the slopes above Grevenmacher. It starts to rain as I enter this pleasant town, with an interesting old quarter, nestling on the banks of the Moselle.

Today I’m on the Route du Vin, following tiny roads through steep vineyards spilling down the hillside. Some of Luxembourg’s best wines are produced here from native grapes like Auxerrois, Rivaner and Elbling. On the over side of the Moselle is Germany where the vineyards stretch to the horizon.

The path keeps mainly above the vines, dropping down to small wine producing villages on the river like Machtum, Ahn, and Wormeldange. Each of these have wineries offering tastings and at Ehnen there’s also a wine museum. At Greiveldange the path climbs up towards woods and then up steps to a religious shrine in a clearing. There are glorious views across the Moselle and below I see Stadtbredimus, tonight’s destination.

My final day and I’m aiming for the village of Schengen, at the bottom of Luxembourg on the border with France and Germany. I leave the river at Stadtbredimus and climb up into the forest to reach another shrine. The path then follows a stream on a boarded section, in a unique habitat which includes the rare fire salamander. It leads down to the Moselle at Remich where there are passenger boats offering river trips.

Again the GR5 veers off into the hillside but I decide to follow the river, first on a grassy track, then on a cycle path by the road, before rejoining the river bank. At the entrance to Schengen, there are displays celebrating the Schengen Treaty which was signed here on a river cruise ship in 1985. A plaque reads “Europe Starts Here” but for me this is the end of my journey and I take the bus back to Luxembourg City. 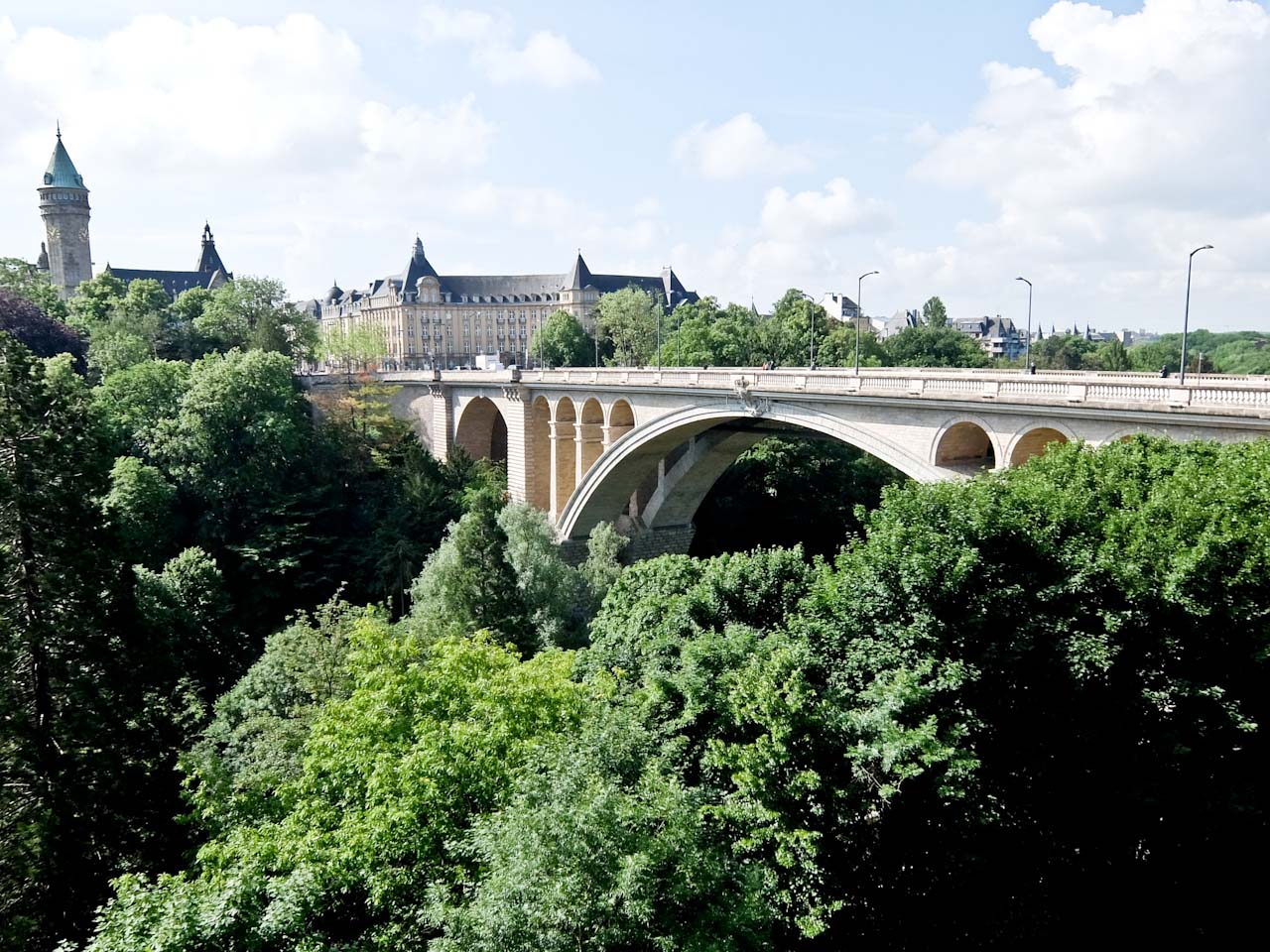 What’s interesting is very little has changed since I walked this route fifty years ago. Apart from a handful of tourists in Little Switzerland, I see almost nobody on the path. Still it’s very well signed and there’s no danger of getting lost. And the free bus service means you can always skip sections if you’re feeling lazy.

GO:  Luxair has daily direct flights from London City to Luxembourg.  All bus and train travel is completely free.

STAY:  Camping Kautenbach has pods for rent and a good restaurant.

Hotel Perekop in Berdorf is a comfortable family-run hotel with home cooking.

Grevenmacher has comfortable accommodation in a restored medieval tower.

Hôtel l’Ecluse is a new 5* hotel on the Moselle in Stadtbredimus with an excellent restaurant.

Hotel Francais is a good base in the centre of Luxembourg City.

INFO: Visit Luxembourg has information about the country.

READ: Cicerone’s The GR5 Trail – Benelux and Lorraine is an excellent guide.