Five million years ago, iron oxide was swept from the Orange River in the Kalahari towards the ocean, forming the magnificent rust-red dunes of Sossusvlei. Lying deep in the Namib-Naukluft National Park, these vast sand mountains are, without doubt, one of the most extraordinary natural wonders I have ever seen.

One of the best ways to experience this otherworldly realm and enjoy stunning views of the Namib Desert is to climb one of the dunes. The most popular is the 170m-high Dune 45, which lies halfway between Sesriem and Sossusvlei.

It’s important to arrive at dawn to avoid the worst of the scorching desert sun and get the full benefit of the glorious morning light. There are also fewer people then, although you are unlikely to have the dune to yourself.

For this reason, I would recommend staying at Sossus Dune Lodge or Sesriem Campsite, both inside the park, so you can be one of the first there. Our desert home was the latter, which had a restaurant, a well-equipped shop and a desk selling permits – just N$170 (approx. GB£9.00 / US$12.00) for two, including a map of the area.

At 5am, our alarms broke the silence of the African night and we packed away our tent with much anticipation. As the sun began to rise, we were on the road towards Sossusvlei and Deadvlei, the scenery an awe-inspiring moonscape with gigantic coral dunes towering from a never-ending expanse of flat gravel plains.

After about 40 minutes, we spotted a cluster of cars at the foot of a particularly beautiful dune and an old, wooden sign which read ‘Dune 45’. A slow trickle of ant-like people were already crawling up towards the summit.

The dawn air was crisp as we began our ascent but, luckily, we were dressed appropriately, donning trek trousers, a windproof puffa jacket and several layers, so we could strip off as the temperature began to mount. Our lightweight trainers also did the trick, although some climbers were kitted out in hardcore desert boots, others wore sandals and a few were barefoot, so anything goes. We also carried a two-litre Camelbak in our daypack and a selection of snacks to energise along the way.

There’s no denying that the climb was tough going. The sand was soft and powdery but heavy and, with every two steps forward we slid back one.

The narrow path – just one or two feet wide – begins steeply and then meanders along the crest of the dune, before rising steeply again. There are vertiginous drops on either side, so anyone who is uncomfortable with heights may find this challenging, despite it being completely safe.

Although you need to be fairly fit, we were impressed to see individuals of all ages and abilities tackling it. Reaching the top could take anything from 20 minutes to 45 minutes, depending on your fitness level.

It was well worth the effort, of course. Many of us have seen the iconic photographs of this wild, remote place, but nothing prepares you for what it feels like to be up on that dune.

So, take your time. Savour the experience and soak in the 360-degree vistas of endless shale desert, broken by eerie dead trees and these enormous, apricot-hued dunes bathed in golden light.

As we gazed out over our magical surroundings and the changing colours of the morning, we felt as if we had been transported to another planet.

All images by Laura Birtles 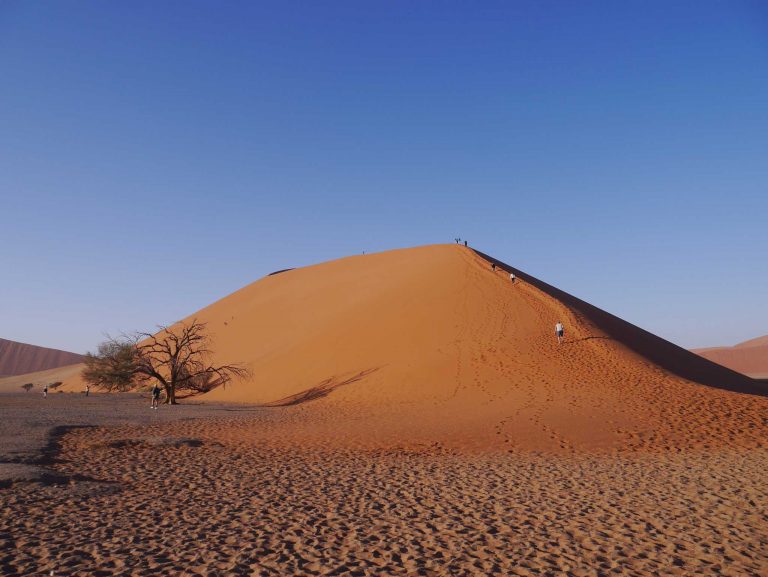