There’s a beach for everyone: from the stunning sands of Latin America, to the beautiful British coast, onwards to the Mediterranean’s best beach, and then down to a Pacific island paradise.

Nicaragua may be a little unknown as a holiday destination but at this time of year is bathing in sunshine and you could be too on their beaches. The San Juan del Sur Bay beach has a dazzling horseshoe shape of muted beige soft sand that is overlooked by a giant statue of Jesus perched north of the bay. The waters around here are calm and very rarely get large enough to surf, making this an ideal beach for young families. For surfers, there’s the Playa Maderas a little further along.

There are plenty of fine eateries from which you can enjoy a most delightful sunset. And after sun down, there’s a fun vibe of a busy nightlife to enjoy.

Oceanographer Jacques Cousteau called Mexico’s Sea of Cortez “the world’s greatest aquarium” because of its unique and rich ecosystem. To get up close and personal with nature, base yourself in La Paz. All the islands are UNESCO protected as World Heritage Biospheres.

Uninhabited Espiritu Santo, absurdly beautiful, is the jewel in the crown: the sea is so turquoise it’s like swimming in a bottle of Curaçao. Once ashore you’ll find wedding-cake white sands, nail-varnish pink volcanic rocks, clouds of yellow butterflies and strange 300-year old boojum trees.

At Los Islotes, you can snorkel with friendly sea-lions. There are many migratory species such as humpback whales, manta rays and leatherback turtles.

Known as the Paradise of the South, Kovalam is arguably the best beach in India. This coconut-forested, crescent-shaped beach is full of character, with the Vizhinjam mosque at the northerly end, brightly-painted boats in the middle, and Ayurvedic massage centres where you can indulge in a rejuvenating herbal, body-toning massage or other holistic therapy. The equivalent of 30p buys you a scrummy curry served on a leaf.

Small, pear-shaped and known as the Island Born of Fire, Camiguin is home to the spectacular White Island beach, a Tippex-white sandbar with views of two volcanoes, Mt Hibok-Hibok and Mt Vulcan. Close by, the turquoise Bohol Sea hides an unusual treasure – the Sunken Cemetery lying 20 feet underwater following a volcanic eruption in 1871. The island has old ancestral homes and historic churches.

Just three hours south of Rio de Janiero, Ilha Grande is a small island home to the jaw-achingly beautiful Praia de Lopes Mendes. To get to the beach is quite an undertaking, but well worth the effort – you have to hike through Atlantic forests thick with hummingbirds, butterflies, tropical flowers and waterfalls with Pygmy and Holy monkeys running everywhere. With sand as white and as soft as flour, the beach of Lopes Mendes is irresistible. The island was discovered in 1502 but today preservation is the word with roads only existing in the island’s main village.

Whether you arrive by sea-plane or boat, Whitehaven Beach has oh-so-white sands, rainforest and crystalline waters. It’s on a tiny, wild island, part of the 1,250-mile long Great Barrier Reef. The sand is 99.89% pure quartz and you can swim with 1,500 types of multi-coloured fish and observe humpback whales on their annual migration. Seventy-three other islands await discovery, some deserted and ideal for a very intimate and secluded day in the sun.

You can camp on some islands but always remember the advice of the Great Barrier Reef Marine Park Authority: “take with you photos and memories, and leave behind only bubbles”. Base yourself on the mainland at Airlie Beach Organic B&B, with massage, yoga, meditation and organic meals. They sell original art and crafts made by local Ngaro and Gia people.

You have to look to Wales for our most beautiful beach in Britain. Soft, sandy Oxwich Bay, framed by woodland and overlooked by Penrice Castle, could come straight from an Enid Blyton story. With its Arcadian beauty, in summer Oxwich is an ideal place for safe swimming, a walk on the sands or through the nature reserve with its 600 species of flowering plants.

The Gower, lying west of Swansea, was Britain’s first Area of Outstanding Natural Beauty and this year is the 50th anniversary. A footpath leads from Oxwich to St Illtyd’s Church, reputedly haunted by a half-man, half-horse creature and further along, the coastline is dotted with castles and ancient monuments and many unspoilt bays.

Nearby Swansea is a city that has reinvented itself in the past 5 years with a thriving local food scene showcasing the region’s rich food heritage: laver bread, cockles, Welsh black beef, and sea bass jostle.

Possibly the most beautiful beach in Africa – Guludo beach bewitches: fine, white sand lapped by the Indian Ocean and fringed by wild African bush. This is a true, barefoot paradise where you can snorkel the reef and observe humpback whales (Jun-Oct).

Climb a hill and watch elephants at sunset. An unforgettable trip is to the nearby isle of Rolas, where you’ll meet local fisherman, Old Man Coconut Crab, who will take you into the Coral Rock Forest to spot the largest crabs in the world.

Tours go to Guludo village where you can learn to pound cassava, weave mats or buy a colourful fabric and take it to the local tailor who will make you a new shirt or dress.

International jet-setters have been visiting tiny Mykonos for 50 years and it’s not hard to see why. With bread-crumb sand and rare cerulean waters, Super Paradise Beach is the most peerless beach on an island ringed by magnificent beaches. It’s located 9km from town.

Super Paradise – like the rest of the island – is hedonistic, funky and tolerant of alternative lifestyles making it a mecca for gay travellers. Mykonos town has traditional tavernas, designer boutiques and attracts world-famous DJs, making it among the top clubbing destinations in the Med.

With its eclectic mix of bedouin hspitality, middle eastern cuisine and Las Vegas style hotels, Eilat can also work well as a family holiday. The Red Sea is famous for deep sea diving, snorkeling and swimming with dolphins. Romantics can relax in candle-lit spas while the young and young at heart will love the nightlife ranging from tented discos to live band bars. Sun lovers hugging the beach can enjoy the vista of the red mountains of Petra on the horizon while trekkers can join a desert safari by truck, camel or horse and dine with the Bedouins.

Captain Bligh and the crew of the HMS Bounty discovered the Aitutaki Lagoon in 1789. After weeks at sea, they must have thought they were hallucinating at the surreal beauty. Tranquil One Foot Island, lined by giant banyan trees and frangipani, fulfills even the wildest of tropical island dreams. Bring a bottle of champagne and the picnic blanket, for this is the perfect place to make love.

Stay in one of seven water bungalows at the Aitutaki Lagoon Resort & Spa where you can laze in a hammock, have a soothing Polynesian massage, go crab-hunting, learn to husk a coconut or dance the hura.

Used as a pirate refuge for more than three centuries, Culebra, also known as Snake Island, is seventeen miles east of Puerto Rico. Topped by Mount Resaca, cushioned in green jungle vegetation, Playa Flamenco has some of the clearest seas in the Caribbean with 1 mile of white, coral sand. The beauty of this 7-mile long island inspires impulsive acts, like hugging trees. The reefs are untouched and there are four endangered species of turtles which visit the beach. The Culebra National Wildlife Refuge protects large colonies of terns and boobies. 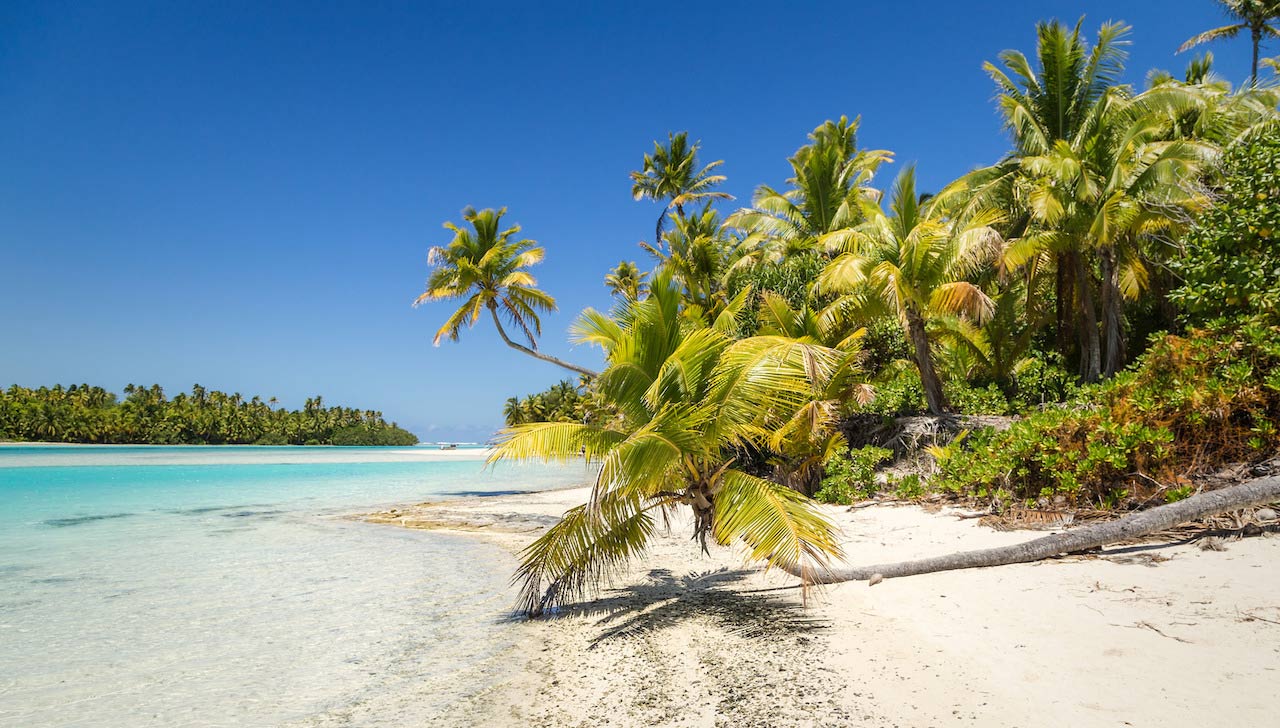 A tour of Naxos the largest of the Cyclades, Greece

Face masks for every occasion in the post-pandemic world