With so much on offer over such a vast area, it can be difficult to know where to begin. So we asked experienced tour operator Greg Fox to give us a basic outline of the logistical options available. Picture credit Gomoti Private, Machaba Safaris

Accommodation
Botswana intentionally keeps its visitor numbers low, ensuring that whether you stay in a permanent lodge or a mobile tented camp, it’s all about enjoying the solitude of its vast wilderness.

The fixed camps and lodges recommended by us at Mahlatini Luxury Travel are all small, allowing for a personalised service. They usually comprise traditionally-styled, walk-in tents or suites (often on raised wooden decks), with electricity, flush toilets and hot running water. Very often, extra spoils such as plunge pools, jacuzzi baths and outside day beds complete the picture.

They are not fenced, so all manner of animals can move through camp. At one with nature, you will soon become attuned to every sound and often enjoy unbelievable wildlife sightings from the comfort of your own room.

The isolated locations of most of these camps means that access is usually possible only by light aircraft.

Mobile tented camps are reminiscent of the expeditions undertaken by early explorers. Sleeping under canvas, you will experience the rustic charm of camping but with a comfortable bed, a flush toilet and steaming hot bucket shower. These camps are semi-permanent and will move for seasonal animal migrations, usually taking advantage of exclusive locations, mostly in private concessions.

Despite the light footprint, the camps are still fully serviced. Meals are taken in a separate mess and bar tent or you will dine out under the stars. There is something magical about the atmosphere created by the soft, warm glow of a paraffin lantern, showering under the starry night sky, and the flicker and warmth of a campfire.

Price
Without apology, Botswana is expensive. It focuses on high-end low-impact experiential tourism, purposely moving away from the mass-market to preserve its pristine environment. You may pay a lot, but what you get is priceless: you experience some of the last great wilderness areas in Africa in a very private capacity. Your camp may be the only one in a 40,000 hectare concession. This sort of exclusivity is rare in today’s world. ‘Luxury’ is as much about the experience as material extravagance.

The operational costs to run small, remote camps are enormous. Just about every item of food has to be flown in by light aircraft. When water levels rise, bridges and airstrips are at risk and may have to be rebuilt. The lodges support conservation and community projects and are heavily involved with the management and protection of these areas, all of which requires significant investment. In addition, the camps lease concessions from the local communities, resulting in strong community partnerships and strict environmental standards which are synonymous with the conservation model that has been employed in Botswana.

In saying that, there are lower cost options available. In and around the Chobe National Park, for example, there are larger hotels and lodges which are more affordable, but whilst the game viewing remains excellent you lose some of the uniquely private feel that you get in the smaller camps.

The other cost-saving option is mobile safaris, which generally travel through the national parks so you are more restricted on times you are allowed to be on safari, you can’t go off-road and there are no night drives, however it is still an incredible wildlife experience.

If you want to stretch your budget further, there are options for self-drivers in campsites in most locations. Usually you have to be pretty self-sufficient.

In terms of activities, there are always ways to provide even more exclusive experiences, from helicopter and balloon rides to private guides and encounters with world-renowned ecologists and researchers. There really is scope for just about anything.

Planning
Most itineraries in Botswana are tailor-made to suit your own circumstances. Of course, the more time you have, the more you can take in and the further afield you can venture.

Having said that, a typical one-week itinerary would include a two-night stay at Victoria Falls followed by a safari, usually in both the Linyanti and the Okavango Delta, with two nights followed by three.

If you have a couple of weeks to spare and want a fuller exploration of the country, we would normally extend the stay in the Okavango Delta to combine a wet and dry camp, varying the experience. In addition, you might want to see the Kalahari and either Nxai or Makgadikgadi pans, where in March or April you would hope to catch the world’s second-largest zebra migration.

The combination of locations depends largely on the season in which you are travelling. For example, a typical summer itinerary would include the Kalahari, Nxai Pan and Makgadikgadi. During the wet season (January to April) these areas become a wildlife haven as the landscape transforms. Clouds of flamingos, numbering up to 30,000, and other migratory birds decorate the watery grasslands. Herds of zebra and wildebeest materialise, drawn by the lush grass, and for several months the desert is teeming with wildlife and predators.

During the winter months (June to October) it’s important to concentrate on the regions where there’s water. Usually the floodwaters arrive at the start of winter, drawing animals from far and wide. It’s also when the Linyanti region comes into its own, with vast herds gathering around the river.

The Okavango is the one constant, offering incredible wildlife year-round.

My ears prick with mild panic. The unmistakable ‘har-har-har’ of a hippopotamus is thrillingly close – just what I worried about. Tshepang Mikell ‘Mike’ Mogomotsi, a guide at Pom Pom Camp who has been poling since age 10, reassures me: “Many Setswana names are religious; my name means ‘Trust in God’”.

Mokoro tours are Botswana’s trademark excursion. Like a bush walk, a mokoro cruise celebrates the small stuff. We watch bees pollinate the aptly honey-coloured centres of waterlilies, the roots of which are visible on the riverbed thanks to the water’s transparency. I peep through papyrus stalks, seeking the petite perfection of Angolan painted reed frogs and witness African jacanas seemingly walking on water.

Our vessel follows paths cleared by hippos and elephant, giants of the grazing world, and we’re flawlessly balanced throughout the two-hour trip – even as I twist about snapping photographs from the water-level vantage. The lack of motor interference makes the sound of water steadily lapping against the hull enchantingly audible, as is the crunch of an elephant ripping up reeds nearby. It’s a blistering January morning and we’re totally exposed, to both the elements and the elephants, but these very factors make makoro so mesmerising.

“The mokoro was also used to hunt lechwe,” says Mike as we watch the aquatic antelope crossing right before us. “Our wooden boats were so silent, we could sneak up on them. We used a spear, so had to get very close.” Proximity and peace, in both tradition and tourism, sets this sort of safari apart. 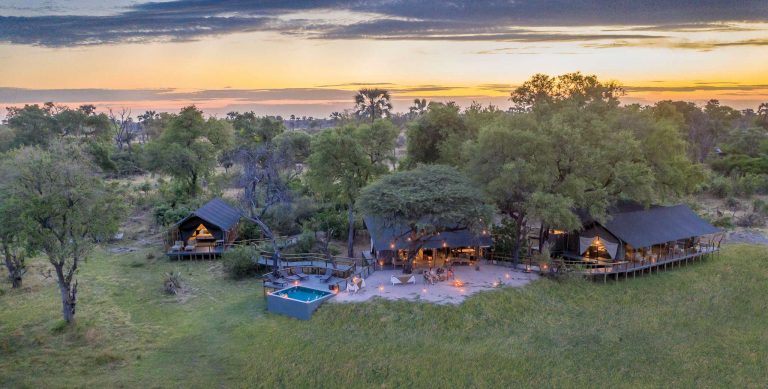