In so many ways, Garamba represents the challenge for conservationists: arguably one of Africa’s most beautiful and vast national parks, it faces enormous pressure from human activity. Sara White made the journey to visit the K9 programme helping to tackle the bushmeat trade.

“It’s been raining hard in Arua, so we leave the runway to dry so nobody dies,” beamed the extraordinarily tall Samuel, hunched in the emergency exit of our Eagle Air Beechcraft 1900 on the tarmac at Entebbe.

It was an interesting start to our journey to Garamba National Park in the remote north-east corner of the Democratic Republic of Congo.

The Arua airstrip, which resembled caramel, consumed us on touchdown and we skidded to a muddy halt. Our fixer Odra, a stout and expressive Congolese, ushered us through several Ebola checkpoints and transported us to the ‘rope’ – the border between Arua (Uganda) and Aru (DRC). Any similarity between the two ends with the names: the tarmac terminated and puddled, potholed murram, with chicken, goats and barefoot children, prevailed.

Several transactions, including the purchase of avocados the size of rugby balls, punctuated the protracted border crossing before we boarded another light aircraft and found ourselves, and the avocados, cruising north-west over jewel-green Congo, piloted by an enigmatic Frenchman, Alain.

There was no mistaking Garamba from the air. This UNESCO World Heritage Site – one of Africa’s oldest national parks, first gazetted in 1938 – emerged as a vast open savannah transected by three main rivers. A necklace of papyrus led the eye to dense forest and the three surrounding domains de chase (former hunting areas) of Azande, Mondo Missa and Gangala na Bodio.

The Garamba Complex stretched out below us – a daunting 14,760 square kilometres, with over 500km of roads and four bridges.

African Parks, the non-profit organisation, has been working in partnership with the DRC Government’s Institut Congolais pour la Conservation de la Nature (ICCN) in Garamba since 2005. Five departments, ranging from operations to sustainable development and constituting over 500 staff, are tasked with protecting this precious swathe of biodiversity.

John Barrett retired from the British Army in Spring 2016 and accepted the post of General Manager at Garamba shortly afterwards. In his late fifties, with a neat moustache and a steely resolve, John quickly implemented a new law enforcement programme. In 2016, 91 elephants were lost to poaching. In 2018 just three were poached.

As trustees of Explorers against Extinction, we were here to learn more about Garamba and to shadow one specific element of John’s new programme – the K9 unit – which our charitable trust helped to fund.

As we sat in John’s office pouring over the map and bookcase, which included a bottle of gin, a bottle of whisky (our gift), some hand sanitiser and a large ornamental rhino (a nod to the northern white rhinos who were last seen in the wild here in 2006), the scale of the job became clear.

This is a challenging corner of Africa. Sharing a 260km border with South Sudan to the north and the Central African Republic (CAR) to the west, Garamba is exposed. Heavily armed groups operate in the corridor between CAR and Uganda. In 2009, the Lord’s Resistance Army attacked African Parks’ headquarters in Nagero, leaving 15 rangers dead.

Pastoralists migrate through DRC to CAR, Chad and Sudan, with some 10,000 head of cattle. African Parks is working to identify transhumance routes and mitigate conflict by diverting paths away from communities and protected areas.

As we talked, the aroma of hot coffee filled the office and went some way to masking the acrid smell of burning bush meat. On the day we arrived, three bags, including duiker and kob, had been seized and four women arrested. These animals would have been shot, by either an AK47 or a homemade shotgun. Snares are not common in Garamba, as wire is a valuable commodity, usually salvaged from old tyres.

Refugees flood over the border from South Sudan to Meri, home to over 35,000 people. About 76 active gold mine sites have been identified within the protected area, attracting as many as 3477 gold diggers with a dependent pool of children and elders possibly five times that number. These are hotspots for bushmeat trade.

The elephants, Garamba’s most famous residents, have suffered greatly, with numbers plummeting from 22,000 to just 1000 in less than 50 years, due to poaching. April and May are the most deadly months – the short dry grass prime for poaching, compared to August’s challenging lush undergrowth. The team is always alert to incursions.

As we sat on the shores of the Dungu River that evening, sinking a cold Tusker, talking Ashes cricket and listening to hippo song, we detected the unmistakable whirr of Alain’s Cessna taking off on a surveillance flight and were reminded that this is the frontline of conservation.

We heard Alain return some time later, just as a crack of lightning lit up the night sky and a downpour of Biblical magnitude arrived. As the rain hammered on the tin roof, I lay awake in the darkness acutely aware of every sound. I thought about the two widows I met working at the station’s kennels – one had lost her husband in a poaching incident and the other to malaria. This is the reality of poaching: people and wildlife suffer.

Mist shrouded the river at dawn and kingfishers danced in the trees. The main bridge had been swallowed by overnight floodwater. We accompanied the K9 unit to the ‘PK Elephant’ vehicle checkpoint about 20km away from Nagero. Chickens and goats spilled on to the road. Children shouted Mbote! Mbote! as we slid past and women clad in bright Congolese fabrics picked a careful path through puddles, with heavy loads balanced on their heads.

One off-duty ranger set about doing his laundry in a wheelbarrow, while others relaxed in the shade, munching maize. A steady flow of bicycles, laden down mopeds and trucks, each caked in sticky red mud, arrived at the checkpoint barrier which read: “Stop. Barriere Ecologique.”

The dogs’ superior detection capabilities have already reaped rewards here: on just the second visit the dogs sniffed out a live Giant pangolin.

We saw the dogs put through several tests during our stay, with impressive results, including the detection wall (where they identified a tiny piece of hidden ivory), ammunition searches and tracking in challenging terrain. With the dogs, the anti-poaching unit is better equipped to track at night, when poachers are most active.

The afternoon was clear and blue. A Real Madrid flag hung limp on the hairdresser’s shopfront in Nagero. The calm conditions were ideal for a monitoring flight.

Achille was raised only two hours from the park. He completed a Master’s degree in elephant conservation in northern China before returning home to head up the Giraffe Conservation Programme at Garamba.

We banked steeply, flushing out four Kordofan – a critically endangered sub species of northern giraffe – from the trees. Last year there were 48 Kordofan here. This year the numbers are up to 55. These are the only known remaining Kordofan giraffe in DRC.

We whirled around again. Alain had seen kob and swooped down below the treeline to see the antelope lope into the tall elephant grass.

Buoyed by the Kordofan sightings, 90 minutes later we found the station unusually quiet. A large family of warthog methodically grazed outside the Command and Control Centre, untroubled by what might be unfolding within.

As we headed back to neighbouring Uganda, John, one of the few with the luxury of DSTV at the station, was able to toast England’s miraculous win in the second Ashes test at Lords. His email read: “Opening the whisky” – a brief and welcome respite from the ongoing battle to restore this remarkable area to its extraordinary potential.

Sara White is the co-founder of conservation charity Explorers against Extinction. www.explorersagainstextinction.co.uk 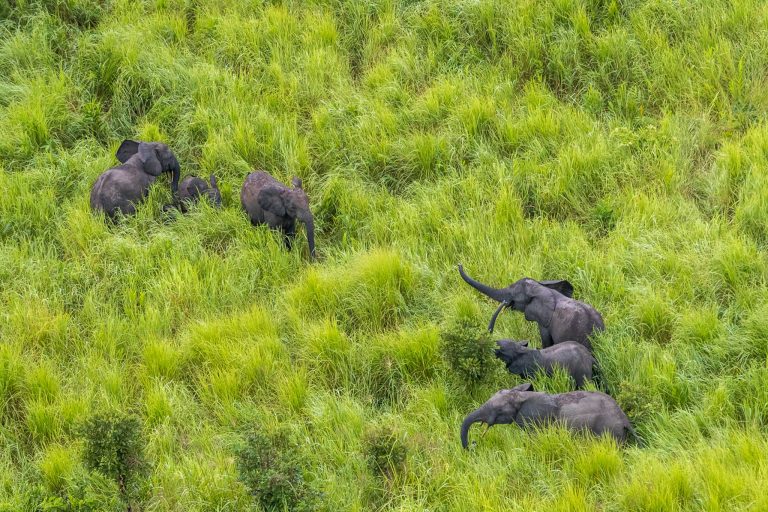 iQ Hotel Milano: A Smart Hotel with Spa in the Heart of Milan