Incredible Places to Visit in 2022 for a Great Escape

The US recently opened its borders to international travellers, and more and more destinations are also opening up – so we’re excited about our travel options for 2022. Now’s the time to start planning – and we’re here to help! Here’s our pick of the top six destinations to start your new year with a bang.

Few places are more epic than the Land of the Rising Sun. It might take a while to delve deep into all that Japan has to offer, but whichever parts you choose to visit, you’ll be in for a wild ride. You’ll find royal palaces, sprawling gardens and thousands of old temples (including Tōdai-ji in Nara with its distinctive Buddha statue on top, and Sensō-ji, the oldest temple in Tokyo) mixing with Mario Kart racers, geishas, sumo wrestlers and people walking around in anime attire. You’ll also find fellow travellers sleeping in tiny capsule hotels, animal lovers petting foxes at Zao Fox Village (the world’s only zoo dedicated to foxes) and gigantic robots putting on a battle/laser show in Robot Restaurant in Tokyo. 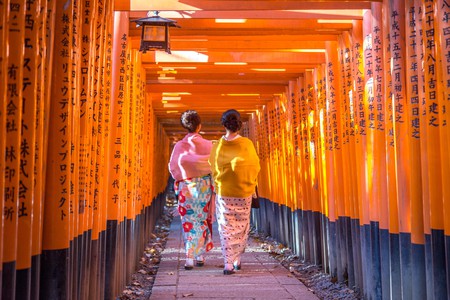 And once you’re done with all the madness, you can take in the serenity of Sagano Bamboo Forest in the heart of bustling Kyoto or hike your way to the top of the legendary Mount Fuji; some of the trails are lined with a series of beautiful, sacred shrines. Of course, a trip to Japan would not be complete without a taste of fine sushi – there are many restaurants to choose from – or a stay in a traditional ryokan. Built from wood and featuring tatami-mat flooring, these charming retreats feel like private oases in the midst of nature. You can also explore the natural hot springs, or onsen, in the town of Kinosaki.

Nothing screams Tokyo louder than the ultra-glam Mitsui Garden Hotel, housed in the tallest high-rise in the high-end Ginza district. Lie in your sleek suite and gaze at the brightly lit city and Tokyo Bay from your floor-to-ceiling windows, or pass by Restaurant Sky on the 16th floor for a healthy breakfast or fancy dinner – complete with sinful bite-sized desserts and even more spectacular vistas. Tokyo Imperial Palace is a five-minute drive away.

If you’re looking for the right blend of history, culture and nature, you’ll find it in Ireland. Natural treasures include the towering cliffs of Moher and the Connemara region, where the surreal-looking Kylemore Abbey stands, its Victorian façade mirrored in the waters of Pollacappul Lake, all within a lush walled garden. For more jaw-dropping views, you have the choice of two scenic routes: the Ring of Kerry around, the Iveragh peninsula, or the Wild Atlantic Way, which stretches from the Inishowen peninsula in Co Donegal to Kinsale, in Co Cork, on the Celtic Sea coast. If you’re in the mood for kayaking, consider giving it a go in the evening in Cork – it’s truly magical. 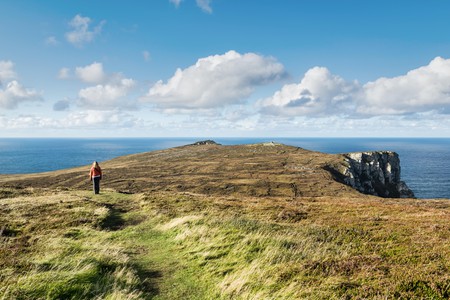 Look out towards the horizon from Horn Head, in northwest Donegal | © Shawn Williams / Alamy Stock Photo

Spend some time exploring the Rock of Cashel, a castle clinging to a limestone rock formation in the Golden Vale area, and Blarney Castle near Cork. The latter houses the famous Blarney Stone, which is said to bestow the gift of eloquence on anyone who kisses it. For art, museums (such as the Titanic Belfast and the Guinness Storehouse) and all kinds of Irish entertainment (how about an Irish dance at the pub?), you need to visit Belfast and Dublin. Dublin is also where you will find Trinity College, famous for its library that houses the 800BCE Book of Kells, the world’s most famous medieval manuscript. Don’t miss the prehistoric Newgrange monument in County Meath or the remains of an early-medieval monastery on the summit of Skellig Michael island.

Hotels we love at prices you love: The Spencer

The calming walnut-and-grey decor at the Spencer proffers a relaxing stay on the banks of the River Liffey in Dublin. There are 200 spacious bedrooms, interconnecting rooms and family suites to choose from, so you’ll be spoilt for choice. Recharge in the 18m swimming pool, or stay in shape at the on-site gym. Trinity College is a short walk away.

Italy has so many fascinating cities and places to visit, that it would be impossible to see them all in one go. A road trip could work, and Rome is a great place to start. You’re steeped in history throughout the city with the Pantheon and the Colosseum, as well as the historic and architectural gems in the Vatican City – including Sistine Chapel adorned with Michelangelo’s famous frescoes. Toss a coin into the Trevi fountain before you leave the city – it means you’ll return here one day. Head north to Milan for modern art and designer shopping. Meanwhile, art lovers will fall in love with the Renaissance churches in Florence that feature elaborate frescoes such as those by Giotto in Santa Maria Novella. 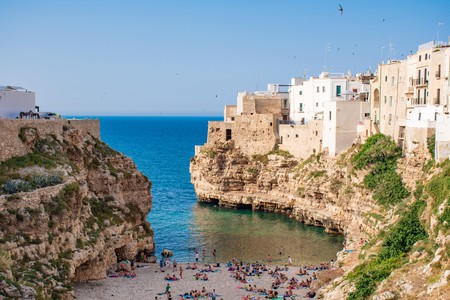 Puglia, known as the boot of Italy, in the south | © Michele Ursi / Alamy Stock Photo

Naples is where pizza was invented, but there’s virtually nowhere in Italy where the food isn’t exceptional. Sail down the canals of Venice on a gondola ride past grand palazzos; take a selfie in front of the Leaning Tower of Pisa, and pass by Casa di Giulietta in Verona, the gothic-style house with the stone balcony that inspired Shakespeare’s Romeo and Juliet. If you’re craving Instagrammable views and abundant nature, visit any of the towns around Lake Como, or hike through woodlands and meadows in the shadow of the Dolomites. Whether you’re looking for a quiet retreat or a new adventure, Italy will not disappoint.

Imposing, lavish and sitting on a canal; that’s the only type of hotel we’d want to stay in on a trip to Venice. This neogothic beauty stays true to the Hilton identity, but with an Italian twist. Housed in a former flour mill on the western end of the island of Giudecca, the Molino Stucky boasts grand rooms in a terracotta palette, as well as a fancy rooftop pool and cocktail bar, both gracefully floating above the canal. Venice at its finest.

You probably already know that Thailand has some of the best beaches in the world, even before Leonardo DiCaprio made Maya Bay, on Phi Phi Leh, famous in The Beach. Admittedly, the film does a great job of portraying this paradise island, yet emerald waters and white sands are pretty standard in this country. Embrace the laid-back vibes on Sunset or Freedom beaches and see for yourselves. And even if you’re not into swimming, there’s much more to discover here. 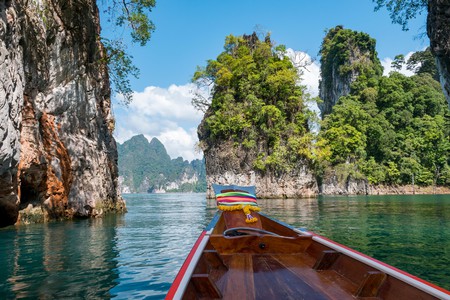 Thailand isn’t short of Buddhist temples – there are more than 40,000 of them – so you’ll be sure to find your own favourite somewhere amid all the gold. Then there are the colourfully dressed hill tribes in the north, who will give you a taste of the country’s rich heritage. Ancient ruins abound, and in Sukhothai, they date back to the Siamese kingdom in 1238. Meanwhile, Chiang Mai, to the north, served as the capital of the Lanna kingdom until 1558; it is still dotted with spectacular Buddhist temples today. Head to Bangkok for sky bars, museums, galleries and parks and don’t miss Khao Yai National Park; tigers, wild boars and elephants roam freely here. Last but not least are the many Thai markets where you’ll taste mouthwatering delicacies and find precious antiques.

Hotels we love at prices you love: Amari Phuket

Staying in a laid-back beach resort is the way to go – and Amari Phuket, in a secluded part of Patong beach, guarantees days basking in the sun or snorkelling in turquoise waters. If you get tired of the sun or the clear waters of the bay, there are three swimming pools to splash around in, along with a deluxe spa and a fitness centre. Can we come, too?

If you’re one of those people who loves all things extravagant, then a trip to Dubai is for you. With year-long sun (although it gets very hot during the summer) and palatial hotels, this is the place for endless shopping, cocktail drinking by a plush pool and sunbathing on an artificial beach – the Palm Islands have plenty. Head to the Golden Souk for a spot of jewellery shopping, or the Old Souk for textiles; then, if you’re feeling flush, dine at the Burj Khalifa, the world’s tallest skyscraper. 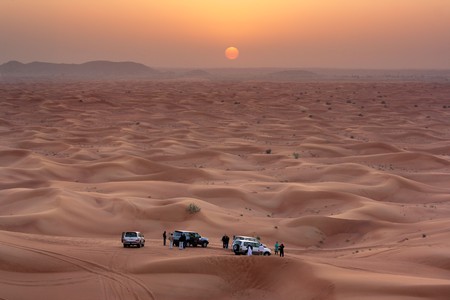 The emirate of Abu Dhabi is home to the Sheikh Zayed Grand Mosque, one of the most impressive mosques in the world, as well as architectural attractions such as the futuristic Yas Viceroy Hotel. For motor-racing fans, it overlooks the Yas Marina F1 circuit, which hosts the Abu Dhabi Grand Prix. Meanwhile, the Liwa desert is where you can head for a safari adventure, passing dunes and oases with palm and fruit trees.

Head to Sharjah to learn all about Islamic history – the Museum of Islamic Civilization houses the UAE’s largest collection of Islamic artefacts. Fujairah is perfect if you’re in search of snorkelling amid wrecks, seahorses, turtles and whale sharks.

Finally there’s Ras Al Khaimah, the fastest growing Emirati state in terms of tourism, which has pitched itself as the ultimate wilderness escape in the UAE. You can enjoy all the usual desert escapades here, as well as tackling the peaks of Jebel Jais, where you’ll also find the longest zipline in the world.

Hotels we love at prices you love: Dukes the Palm

It might be one of the most affordable five-star hotels on Palm Jumeirah, Dubai, but that isn’t to say the Dukes the Palm skimps on luxury. Think doormen in top hats, crystal chandeliers in the vast lobby and roomy suites with luxe furnishings. There’s a massive indoor swimming pool, and a gym with superb coastline views, so that you don’t lose motivation.

If it’s winter sun you’re after, then the Canaries should be high on your travel list. These Spanish islands, off the northwest coast of Africa, are sunny almost all year round, with an average temperature of 20C (68F) during the winter. This means you’ll get plenty of opportunity to sunbathe on heavenly beaches with turquoise waters and soft sands; one of the brest is Papagayo beach, in Lanzarote. There are volcanic beaches in Tenerife, such as Benijo, and La Palma, home to Charco Verde. 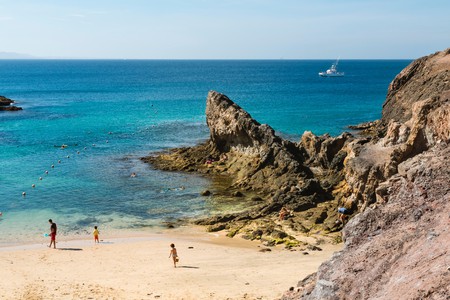 But the Canary Islands are not just about dreamy beaches. There’s Unesco-listed Teide National Park in Tenerife, which comes with craters and petrified lava rivers, and the 250ft-high (76m) Roque Nublo in Gran Canaria, the “clouded rock” that’s a popular hiking spot.

For some of the best views, visit La Palma and the rugged Taburiente National Park, which includes La Cumbrecita viewpoint, high in the mountains. Stargazers are in for a treat in Fuerteventura.

Art lovers should head to Lanzarote to see the work of Cesar Manrique, whose brightly coloured masterpieces blend in with nature, celebrating the dramatic island landscape.

Hotels we love at prices you love: Hotel Tropical Park

This light-filled, tropical paradise in Tenerife lies 150m (500ft) from the beach, but you might not even get that far. Rooms are done out in summery white and blue, with balconies looking out onto two lagoon pools and sweeping views of the coastline. There’s also an outdoor tennis court, hair salon and health club and spa, where you can pamper yourself with a massage.