As far as extraordinary sightings go, this is pretty darn unusual

High on the bucket list of many avid safarigoers is a serval, but spotting them is tough: they’re shy, secretive cats that tend to live in tall grasses — the perfect combination for staying unnoticed.

So imagine how it must have felt to have seen an even rarer melanistic serval, which has made its home in the Namiri Plains area of the eastern Serengeti, Tanzania.

Melanism (increased development of the dark-coloured pigment melanin in skin/hair) in servals primarily occurs in East Africa, particularly in highland regions over 2000m, which is what makes this Serengeti sighting particularly unusual.

At around 1000m, the Namiri Plains are considerably lower than the normal altitude where melanism is more prevalent. It’s likely this particular serval travelled from the nearby (and much higher) Ngorongoro Crater and established his territory here.

Nobody knows for certain why melanism occurs in servals. Some think the increased altitude (and forested habitat that comes with it) reduces exposure to daylight, encouraging melanism.

There’s no guarantee that ‘Manja’ (named after the guide at Asilia Africa who first spotted him), should he find a mate, will produce melanistic kittens. As melanism is carried by a recessive gene, it could be years before any begin appearing in the area. The hope, for now, is that he continues to flourish in the grasslands. Besides, what serval could resist those charming good looks? 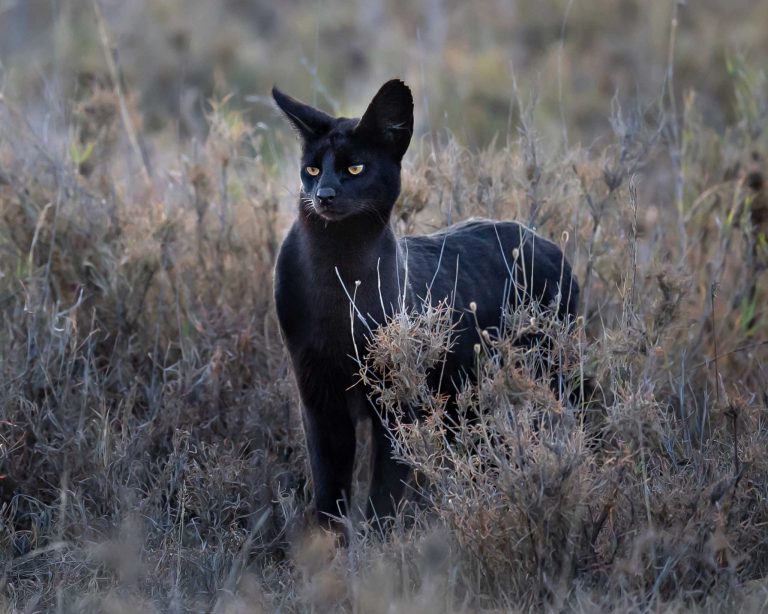