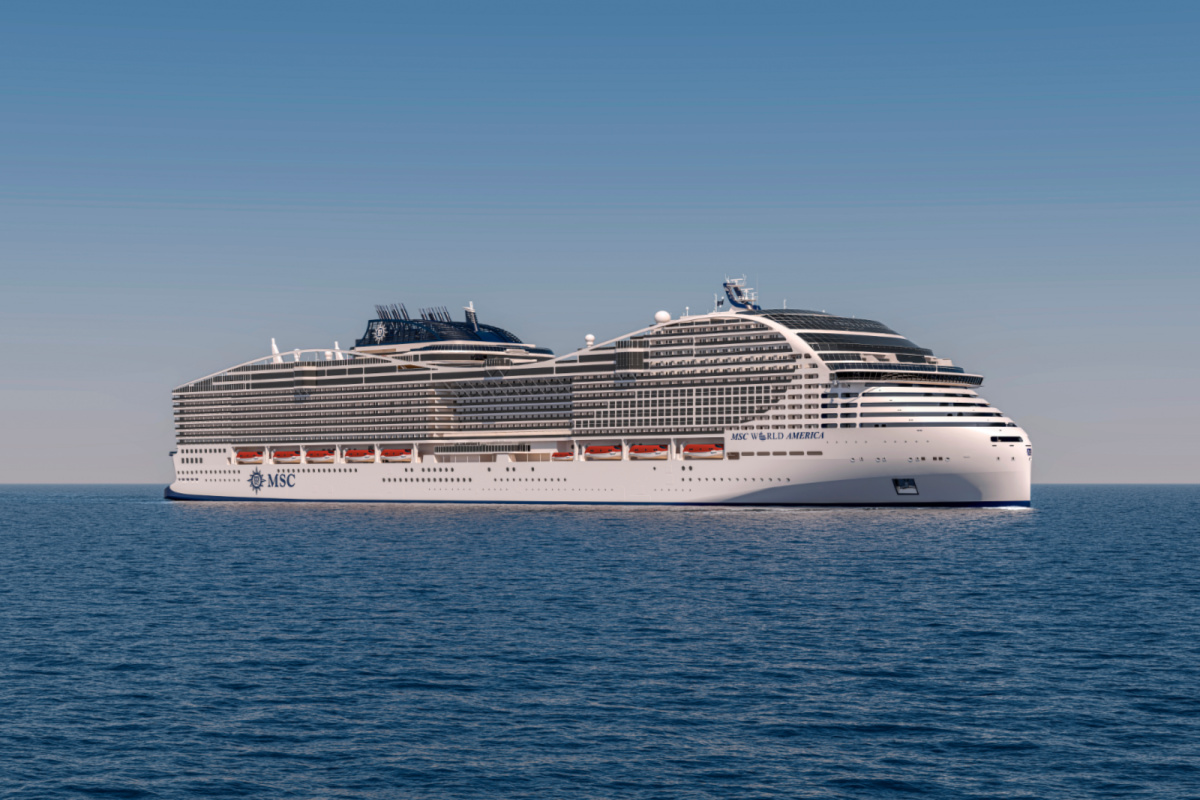 Cruise giant MSC Cruises has officially cut steel on its newest ship, and it is bound for the U.S. upon its completion. During a ceremony commemorating the delivery of another ship, the MSC World Europa, officials unveiled the name of the new ship along with several details. The MSC World America is expected to make its first sailing in the summer of 2025 and will service North America and the U.S. Market.

Rodriguez said of the ship, “MSC World America is a testament to our ambitious growth plans in the U.S. and the Caribbean and further solidifies MSC Cruises as a major player in the North American market with another of our largest, most glamorous ships coming to the region.” The company has also launched new social media channels where cruise enthusiasts can follow along with the ship’s progress as it is built over the next 2 years.

In a press release, MSC Cruises announced that the MSC World America will provide a “futuristic cruise experience with groundbreaking design, unique dining experiences, and unforgettable onboard entertainment.” At 105 feet wide and 22 decks tall, the ship will be the line’s largest in the U.S. when it begins service in 2025. Passengers can expect over 2,600 cabins and 420,000 square feet of public space.

MSC Cruises currently has 3 ships sailing in the U.S. and will have 5 by the start of the 2023-2024 season. The MSC Meraviglia, MSC Seascape, MSC Divina, MSC Magnifica, and MSC Seashore will offer cruisegoers a variety of itineraries to choose from, with departures from Brooklyn and Florida, and destinations including Bermuda, the Caribbean, Central and South America, Canada, and New England.

The MSC World America is being built at the well-known Chantiers de l’Atlantique Shipyard in France, the same shipyard that has just delivered the MSC World Europa. The Chantiers de l’Atlantique Shipyard is also building two new luxury superyachts for the Ritz-Carlton Yacht Collection, The Ilma, and the Luminara, to be completed in 2024 and 2025, respectively.

MSC’s newest ship, the MSC World Europa, which was officially delivered on Monday, is the first in the company’s new class of ships, the MSC World. The World Class of ships claims to redefine cruising with “future-proof” technologies and “never-before-seen concepts.” The World Europa is the first of MSC’s liquified natural gas-powered ships and will make its maiden voyage on December 20, 2022.

With 19 vessels, MSC Cruises is the 3rd largest cruise company in the world, with a presence in North America, the Caribbean, Europe, South America, the Gulf region, Eastern Asia, and Southern Africa. The company expects to expand its fleet to 23 ships by 2025 and to 29 by 2030.

In 2020, in the midst of the global pandemic, MSC Cruises was one of the first major cruise lines to return to sea and states that the health and safety of its passengers and crew is its top priority. The company is also committed to the health of the environment and has a goal of achieving net zero emissions across all operations by 2050.