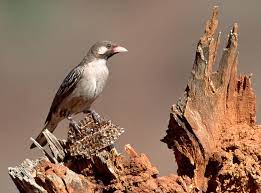 Seeing is believing: Mike Unwin falls for the tempting twitter of the greater honeyguide

It’s early morning in Kafue National Park, Zambia, July 2008. I’m one of six on a guided morning walk, and our guide is a bird.

The bird first appeared five minutes ago. It’s nothing special to look at: a typical ‘little brown job’ of the kind that might interest birders but doesn’t do much for the average safari guest. But our game walk thus far has been rather short on game, so we’ve decided to take a closer look.

Besides, this bird seems to be inviting our attention, twittering persistently as it hops ahead of us from tree to tree. Each time we approach, it flutters on a little further and redoubles its racket, as though imploring us to follow. A flash of white from its tail seems to lead the way.

And so we do follow, leaving our trail to tag along behind this avian pied piper. Now, at last, wildlife appears: a curious family of warthogs; a kudu staring from a thicket. But when we dally to check out these mammals, the bird’s twittering rises to a frenzy. It seems there’s no time to lose.

Eventually – after tramping a kilometre or so – we reach a large baobab. As we assemble around the trunk, the bird flits onto an upper limb and falls abruptly silent. I raise my binoculars for a closer look. It’s roughly starling-sized, with a streaky breast, dark bib and stubby pink bill. Otherwise there are no obvious markings. Those white outer tail feathers that it flashed in flight are now discreetly folded away.

Then I notice something else: insects are buzzing around a dark hole in the trunk just below the bird. And a faint drone emanates from the branches. Bees!

Suddenly everything falls into place. This bird is a greater honeyguide. And it’s not by chance that we’re standing beneath a bees’ nest. The bird has led us here quite deliberately. Now it expects us to fulfil our part of the deal: namely, to climb up and scoop out the honey. As soon as we’ve left, it will tuck into the left-over grubs – and the beeswax that it has a unique ability to digest. It’s a time-honoured arrangement, and one that has traditionally provided sweet, sticky sustenance to rural communities across Africa. Now, clearly, the bird is waiting for us to do the honours.

Never judge a bird by its cover. A greater honeyguide’s unremarkable appearance belies some very remarkable behaviour. This common woodland resident has evolved a unique symbiotic relationship with the people who share its habitat: it knows exactly how to lead them to a rich food source that they might not otherwise find and that it would not otherwise be able to exploit. The chattering call (distinct from its usual territorial call) and flashing tail feathers are all part of its strategy.

Reputedly, the greater honeyguide also enjoys the same relationship with honey badgers. This would seem to make perfect sense, although it has never been documented. Either way, it explains how this bird – which occurs across much of sub-Saharan Africa – acquired its delightful scientific name: Indicator indicator.

Persuading large mammals to provide its meals is not the only way in which the greater honeyguide outsources labour. Like a cuckoo, it is also a brood parasite, laying its eggs in the nests of other birds who rear its chicks as their own. The unwitting and unfortunate hosts comprise hole-nesting species such as barbets, kingfishers and woodpeckers. The female honeyguide lays a single egg in each of several nests. She may crush the host’s eggs in the process. If not, her chick, once hatched, uses a sharp spur on its bill to peck its nestling companions to death.

So, what happened on that morning in Kafue? Did we get the honey? Sadly, no. I’m afraid none of us was prepared to risk life and limb by shinning four metres up a baobab and sticking an arm into a nest of unhappy bees. Instead, after taking a good look, we went on our way, leaving the irate bird to vent its displeasure in a paroxysm of twittering.

Bad move, apparently. African folklore, I have since learnt, teaches that you should never disappoint a honeyguide, either by taking all the spoils or by reneging on the deal. If you do, then next time the vengeful bird might lead you to something less appealing: a black mamba, perhaps, or an unhappy leopard.

A decade or so later, and it seems I’ve managed to escape this fate. But to this day, I avoid the honey aisle in my local supermarket – instead, sending my daughter to pick up a jar. Where the greater honeyguide is concerned, you just can’t be too careful.

Image above: A greater honeyguide feeding on a honeycomb, KwaZulu-Natal, South Africa, by imageBROKER/Alamy Stock Photo