Members of Yoga Library Singapore made their way to a retreat in the Kashmir Valley last month,  Chayanika Saxena, Library Singapore shares the experience. The social tapestry of the valley of Kashmir is vibrant, diverse and layered. From the relics of its Buddhist past to its long history of association with Vedic practices, Kashmir is truly as multifaceted as it can get. Apart from its resplendent beauty, Kashmir has also been at the forefront of leading the mantle as a site of spirituality. Its connection to Yoga, in particular, traces its history back to the time of Adi Shankara, who is believed to have visited the valley in the 8th century CE. A proponent of Advaita philosophy, Adi Shankara advocated ideas related to spiritual oneness, attained as it was to be through meditative practices and consciousness about the Self. It is no surprise then that the Valley of Kashmir is full of places, monuments and sites named after the founder of Advaitism.

Speaking of Adi Shankara’s cultural import, the Jyeshteshwara Temple, which is the oldest temple in the Kashmir Valley, is more commonly known as Shankaracharya Temple. Dedicated to the Hindu God, Lord Shiva, this temple and its adjacent land have been declared sites of national importance. They are protected by the Archaeological Survey of India. Also, it is interesting to note that despite its inclusion within the folds of Hinduism, the temple and the hill on which it is located have been relevant to Buddhist and Persianate cultures alike. Accordingly, where the architecture of this temple is essentially Buddhist, the hill, which otherwise goes by the name of Gopadiri, is also known as Koh-e-Suleman and Takht-i-Sulaiman. 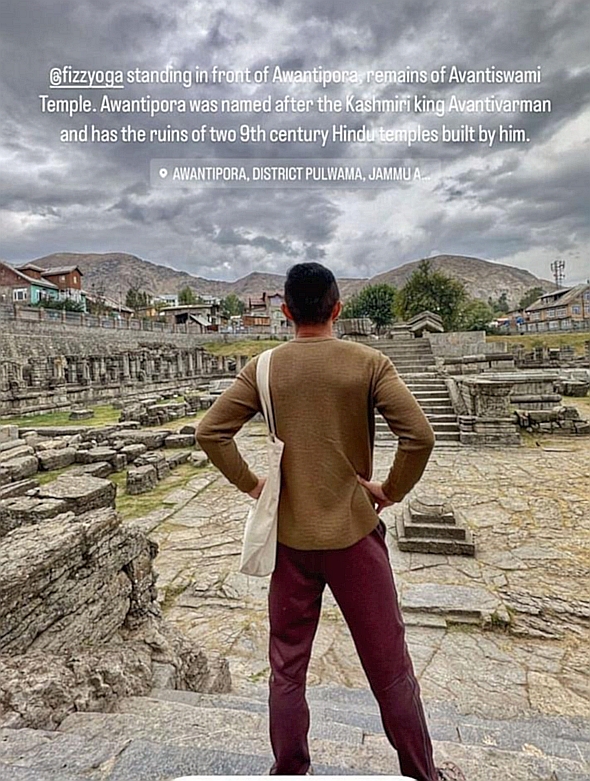 In addition to being a known seat of spirituality, the Shankaracharya Temple has a historic connection to Yogic practices. Connecting yoga to meditation, it was Adi Shakara who came to establish a tradition of meditative contemplation that could help in attaining a sense of spiritual oneness of the Self, i.e. Atman with the Universal reality, i.e. Brahman. For Shankaracharya, yoga was essentially a tool that could help in steadying one’s mind and which, when combined with the study of the Upanishads, could help in attaining moksha, or salvation. Rejecting the need for an absolute suppression of desire in favour of the conscious withdrawal of the mind from sense objects, Adi Shankara approached yoga, particularly Jnana Yoga (yoga of knowledge), as the most optimal means to achieving higher knowledge about oneself. Indeed, the goal self-realisation is not simply attained through the renunciation of the material world. Instead, spiritual awakening often comes about as a result of a disciplined training of the mind and body, in which yogic meditation can be of immense help.

Latching on to this potential of yogic practices, the members of Yoga Library Singapore made their way to the Kashmir Valley last month. Having conducted yoga retreats in South East Asia, including Bali, Bangkok and Vietnam, their recently organised retreat in Kashmir marked their maiden foray into the Indian yoga market. In fact, in a way, choosing Kashmir as their first port of entry, so to speak, allowed the Library to give Kashmir its due by highlighting the contribution of the Valley to the larger yogic landscape.

According to Anand Goyal, co-founder of the Library, Kashmir Shaivism Yoga is at least 1200 years old. In fact, Goyal went on to observe that unlike what may have ordinarily been thought of, “yoga is not frowned upon in the Kashmir Valley (which is predominantly Muslim)”. Apart from building on the vast historical capital that yoga has in the Valley, the Library maintains that the place itself, courtesy of its pitcuresque environs, is a “good place to do yoga “. For that matter, Goyal believes that the Library came to Kashmir at an appropriate juncture just when the Valley is recovering from the after-effects of COVID and lockdowns.

Kashmir’s growing interest in yoga and other meditative practices was recently demonstrated as the union territory came to host a “Yogasana” competition. Organised in Srinagar by the Jammu and Kashmir Sports Council and Jammu and Kashmir Yogasana Association, more than 300 more people competed in different age categories in the event. According to reports, the competition was not only meant to give the youth of the Valley an opportunity to participate and compete at national and international events on yoga. But, at the same time, use such collective events as occasions to create further awareness about social evils, such as drug abuse, with the objective of combating them.

The newfound momentum around yoga in Kashmir comes as an exciting and encouraging new development. Apart from helping the Valley promote itself as a spiritual retreat for the domestic audience, the international traction it is gaining on these grounds will certainly help Kashmir project itself in a new and different light.