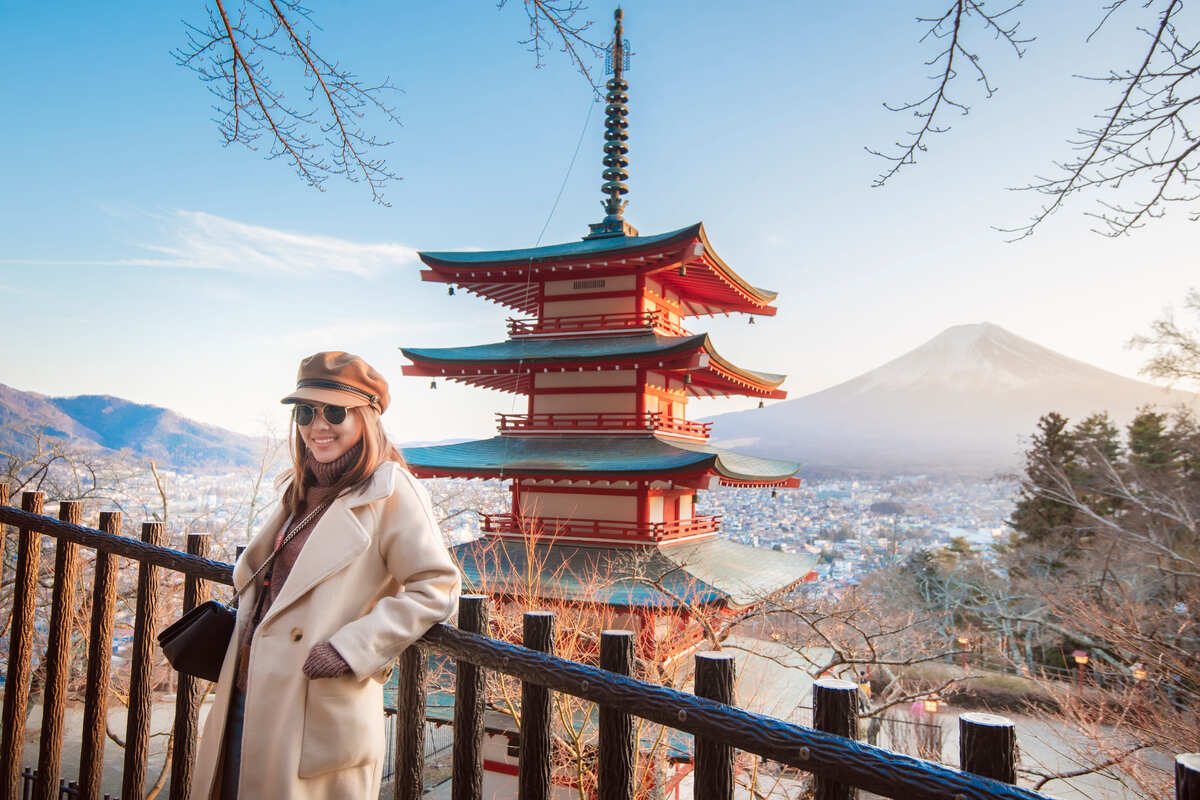 Japan Will Remove Restrictions To Allow For Normal Tourism This Fall

In a major change of approach, Japan is eyeing autumn as the season to allow for normal tourism and finally remove its harsh border measures, including the visa it imposed on American travelers. Pretty soon, U.S. citizens and other foreigners will be allowed to enter Japan with fewer hurdles.

Throughout the pandemic, the Southeast Asian nation completely sealed itself off from the rest of the world in a bid to stem the viral spread. While in some ways it paid off, at least initially, in others it stalled economic growth, as Japan was once the third-largest market in this sector in terms of revenue, behind the United States and neighboring China.

Naturally, Covid dealt a crippling blow to Japan’s tourism initiative, with arrival figures dwindling every month, but now it’s ready to bounce back stronger than ever:

Japan Is Looking To Catch Up With Other Asian Competitors

As reported by Japan News, the Land of the Rising Sun is axing three of its most controversial border regulations starting this fall. With this, Japan expects to catch up with other Asian competitors like Thailand, Cambodia and Indonesia, which have loosened their own rules months ago and have been shattering tourism records ever since.

Thailand was even forced to close one of its most famous beaches, the one featuring on a Leonardo DiCaprio movie, due to mass tourism returning. Meanwhile, Japan hasn’t even entered the competition, with numerous media outlets bringing into question its relevance as a destination in the post-Covid world, and the national currency dropping to a 24-year low.

It may have taken a while longer to respond to the looming crisis, but the country is finally signalling a return to normal. Well, sort of.

Requirement For Visa Sponsorship Will Be Removed

For the better half of the past two years, very few Americans managed to travel successfully to Japan, even after vaccines became available and infections dropped. The reason why? At an age where the American passport is one of the strongest, with very few destinations requiring U.S. citizens to obtain visas in advance, Japan went the opposite way completely.

Under the pretext of Covid, it slapped a visa requirement on regular U.S. passports. In sum, Americans were no longer allowed to board a flight, or any other transportation to Japan without a pre-issued sponsored tourist visa, which had to be obtained via a state-regulated travel agency. Of course, applying for one isn’t cost-free, and definitely not easy.

After securing sponsorship from an agency, which essentially meant a tour operator had approved a visitor’s travel plans, as opposed to bearing the costs of the visa itself, Americans were instructed to request a visa at Japanese Consulates in the United States. Adding to their woes, Consulates are only available in key locations, such as Houston, Miami, New York, etc.

Those living in other smaller cities or towns faced both a time-consuming and expensive process, and even risked a visa refusal tarnishing their valuable American passport. Luckily, Americans will be able to enter Japan again, without any of these bureaucratic steps, soon enough, at least according to Deputy Chief Cabinet Secretary Seiji Kihara.

According to Mr. Kihara, the country ‘will review restrictions altogether’, and carry out changes in the ‘not-so-distant future‘. In other words, it is preparing to ditch a range of measures, including the visa imposed on Americans, in time for autumn. Additionally, the daily tourist cap, already mentioned above, might be nearing its end.

Earlier this month, Japan raised the cap from 20,000 people per day allowed to cross its borders to 50,000, and while this certainly helped, it by no means a major reopening, considering non-resident foreigners, such as American tourists, have new temporary visa limitations in place. After months of speculation, it seems the self-imposed curb is being lifted.

We even have a tentative date: sometime in October. According to Kihara, who addressed the country on a Japanese TV program on September 11, the government will relax its tourism rules further, as Japan ‘must not fall behind’ the rest of the world. He specifically mentions demand for Japan’s ‘many autumn and winter attractions’, confirming early estimates.

Once the daily cap is removed this October, should Kihara’s reopening plan come to fruition, Americans will not have to fight for a slot in Japan’s list of pre-approved, 1,500,000 monthly travelers. They will be allowed to fly there without applying for permission in advance, and regardless of arrival figures at the time. This leads us to the final mandate scrapped:

Group Tour Packages Will No Longer Be Mandatory

Much like the visa restrictions and the wider opening of borders, Japan will begin allowing Americans to travel without having booked a guided tour. Previously, tourists had to be chaperoned, and their itinerary was controlled entirely by their travel agency: no carefree wandering allowed, and certainly no off path places.

The only other country that comes to mind when we think of strictly surveilled tourism is North Korea, where visitors are required to follow their group at all times, and severe punishments apply to those who don’t observe the rules. Of course, Japan isn’t a dictatorship and the only danger facing unethical tourists are fines, but the parallels were still uncanny.

Fortunately, Americans will once more be able to travel Japan in their own terms, be it incredible city breaks in Tokyo or Kyoto, or exploring the nation’s fascinating nature. Once Japan enacts these changes, we expect to see a pronounced increase in bookings from the U.S. and beyond – after all, it is one of Asia’s hotspots, having received 31.9 million visitors in 2019.

Under the current entry guidelines, a mere 12,112 tourists part of tour groups have been approved for travel to Japan this September, while October is seeing an even lower rate of approvals with only 8,710 visas issued. Clearly, Japan’s tourism industry is struggling: in 2019, an average of 2.6 million tourists were arriving per month.

This Is Great News, But It Is Not A Full Reopening Yet

Japan is the last of the G7 countries to still severely curtail travel. All the others, including the U.K., France, Germany, the USA and Italy have either loosened requirements significantly, or reinstated their pre-Covid normality. Japan’s move is certainly welcomed by the lot, as well as visitors, as it will foster international relations and boost businesses.

Mr. Kishida agrees, asserting that Japan’s next steps will allow foreigners to ‘resume interactions’ with Japan, and even benefit from its weaker currency. This year, the dollar surged against other currencies, including the Euro, with which it reached a historical parity with, and its value has significantly improved over the Japanese yen as well.

Once Japan drops its triad of tourism rules, some Americans may not even be required to undergo testing any longer: since August 30, the country has allowed pre-approved travelers to enter without presenting a negative PCR within 72 hours, as had been the condition previously. In order to fit the criteria for exemption, Americans must be fully vaccinated.

In Japan, fully vaccinated means having at least three doses of a vaccine approved for use in the country. This instantly rules out any Chinese-made vaccines, though all major brands used in the Western World, including Pfizer’s COMINARTY, AstraZeneca’s Vaxzevria, Moderna’s Spikevax, Janssen, Bharat Biotech’s COVAXIN and Novavax’s Nuvaxoid are accepted.

In general, Japan has not allowed entry of non-vaccinated, non-resident foreigners since the vaccine roll-out, though it may be possible with post-arrival testing and quarantine. So far, it has given no indication the vaccine requirement will be dropped alongside the visa, tour package, and sponsorship rules.

Effectively, Japan’s easing of rules will mostly benefit vaccinated Americans, as it is not a full reopening yet. We will update you with more information as it becomes available.

eVisa Is Currently Required For Entry To Japan

Lastly, Japan has tweaked its immigration act. Once it reopens for tourism as business as usual, it will expect Americans to apply for an eVisa online, modeled after the United States’ own ESTA applying to visitors from the EU, UK, Australia and countless others, and Europe’s future ETIAS, set to come into force next year.

Japan’s eVisa has been proposed a long time ago, prior to the pandemic, and despite its name, serves as a Travel Authorization Scheme and seeks to facilitate the work of Japan’s border officers on the ground, and Consulates abroad. In order to apply for the eVisa, already in place, Americans must follow the steps below:

We are not able to confirm, at this point, whether the eVisa introduced in August 2022 is permanent, or if it in the future it will cease applying to Americans, Canadians and other nationalities that up until 2020 were part of Japan’s Visa Waver program. Those visiting Japan soon are advised to check the latest updates from the Ministry of Foreign Affairs.