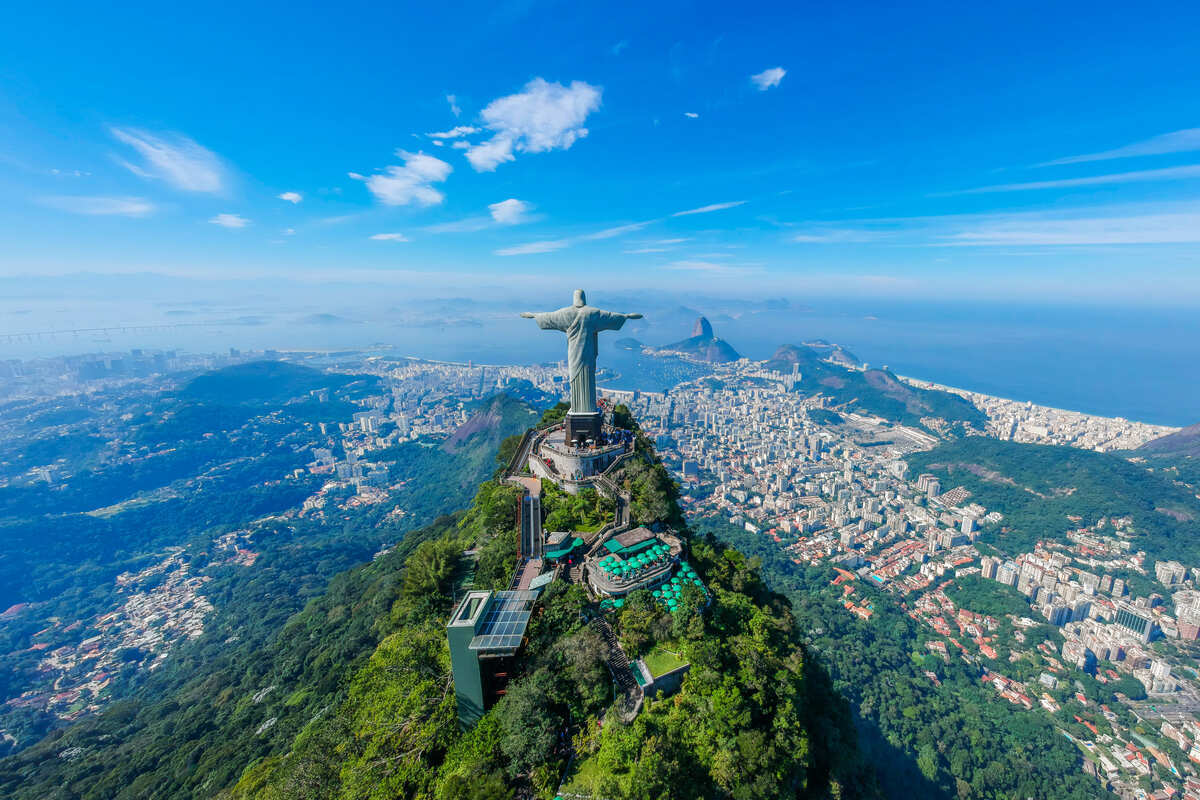 Brazil may be home to a beautiful coastline and some of the world’s most iconic sights, but the cold, hard truth is that it remains one of the least tourist-friendly destinations in Latin America, and in this article, we will give you four reasons why you may find it more challenging to travel Brazil than neighboring countries.

I get it: catching a glimpse of Christ the Redeemer standing watch mercifully over the bustling metropolis that is Rio, sunbathing in Ipanema as you sip some coconut water to the soothing sound of crashing waves, or exploring the colorful streets of Salvador, the regional capital of an under-visited Northeast, all sound appealing enough.

Sadly, it only takes a couple of hours being in the country for visitors to realize there is a lot your usual travel brochure does not cover:

You May Have Your Purchases Limited For Not Being Brazilian

Perhaps one of the most unbelievable entries on this list, and something not that many Americans are aware of, unless you hold a CPF (Cadastro de Pessoa Fisica), which is the Brazilian equivalent to a Social Security Number, it will be extremely difficult, and at times impossible, to buy anything online – this includes tickets for cultural attractions, purchasing data, and intercity transportation.

Let’s take SIM cards, for instance: although e-SIMs have become massively popular in recent months, and roaming fees are not as expensive as they once were, you will certainly get the best value for your money buying a local Brazilian SIM. While there are several companies to choose from, perhaps shockingly, not one of them offers a tourist package.

It gets worse: you can only buy SIM cards in Brazil upon presentation of a CPF, supposedly for security reasons, which is an inconvenient requirement seeing that, for obvious reasons, non-Brazilian tourists do not have one. You read that right: a passport will not cut it. Alternatively, visitors can buy a pre-paid SIM from unofficial vendors or kiosks, though online activation of the SIM itself still requires a CPF.

Searching Google, you should come across numerous reports of visitors to Brazil who had trouble not only accessing data but even booking flights thanks to their status as non-Brazilians, and, subsequently, individuals without a CPF. There is a way for foreigners to get their own Brazilian Social Security Number, but it is so complicated it resembles a visa application process, and it takes time:

**When staying at a friend’s house or with a host family, you should ask them to write a declaration confirming you reside in the address. This needs to be notarized at a Registry Office (Cartorio)

You can certainly enjoy a stress-free, short-term vacation in Brazil if data roaming isn’t a big concern/ you’re an Airalo devotee, or you have pre-arranged accommodation and transportation ahead of traveling, but if you’re a digital nomad staying longer than a couple of weeks, you’re best advised to apply for a CPF.

Brazil Is In The Top Ten For Highest Crime Rates Globally

Being born in Brazil myself, and having lived several non-consecutive years in the country, I have always maintained an increased level of situational awareness due to the widespread violence and impossibly high crime rates. That being said, even keeping a low profile and exercising caution might not entirely protect you from harm in large urban centers.

Most visits to Brazil are trouble-free despite high crime levels, as attested by the U.K. Government, but there is no denying safety is a pressing concern for tourists and locals alike. As any Brazilian who’s grown up in this environment will immediately warn you, flashing any valuable items – jewelry, phones, tablets – is most definitely a no, daytime or nighttime, as is drawing attention to yourself by speaking English, or any foreign language, in city centers.

This is particularly true in places like Rio, which have long struggled to keep crime levels in check, mostly to no avail as a result of the city’s own complex social fabric and the systemic issues that pervade Brazil’s judiciary. I was only ever mugged in Brazil once as a teenager, and ironically, the traumatizing experience transpired in Rio.

More precisely, in Copacabana, a developed beachfront area lined with five-star hotels where the carioca elite is normally seen about. For me, this is a testament to how ‘normal’ safety rules applying to other countries, such as Mexico, cannot necessarily be replicated in Brazil. Whether you’re being reasonable by sticking to well-lit pedestrianized streets and tourist zones or not, you could still be affected.

I have lost count of the number of times I was urged by Brazilian friends to leave my phone at home going out at night, or at the very least, bring a secondary one with me ‘in case’ I am approached violently, so I would have something to give up; or then again, always calling an Uber from inside the building, as opposed to standing by the sidewalk, where you’re in a vulnerable position.

It just feels like being in a constant survival mode, 24/7, except when you’re home or safe inside your hotel.

Currently, Brazil has the ninth highest crime rate globally, with 67.49 incidents recorded per 100,000 inhabitants. It surpasses all of its closest competitors in the region, most notably Argentina, Chile, and Uruguay, which are not traditionally deemed ‘unsafe’, though it still fares a lot better than Venezuela, where rates reach a staggering 83.76.

Brazil’s unpreparedness for international tourism means local staff and service providers outside Rio, Sao Paulo, and other metropolitan hubs are not usually trained to host international guests. A mere 1% of Brazilians are able to speak English fluently, and this normally poses a problem for tourists in need of assistance.

Internet in Brazil isn’t exactly the fastest or most reliable, so it may be, at times, that Google will not be available as a translation tool. In any such scenario, knowing a useful phrase or two in the local language is crucial. According to previous visitors who have shared their experiences on the online forum Travel Stack Exchange, ‘people understand very little other than Portuguese‘.

Matt Colson, an expat who was reportedly living in the Brazilian state of Rio Grande do Norte in 2016, confirmed himself ‘tourist staff will not be able to understand anything beyond the most basic phrases‘. Believe it or not, consolidated tourism hubs like Rio are no exception: ‘even in Ipanema, one of the most popular parts of Rio for international tourists, English is not spoken‘, remarked forum member ‘Tim’.

Unlike other destinations in Latin America that have been investing heavily in infrastructure in hopes of bettering themselves and improving the tourist experience – notably, Mexico’s laudable Tren Maya project – Brazil is still lagging behind as a continent-sized behemoth where the flow of goods, services, and people takes place almost exclusively via road.

Naturally, traffic can be wild, with three people dying in car collisions per hour, and traffic jams influenced by a lack of transportation planning and dual carriageways. In the likely event that your bus will get stuck behind a heavy lorry – or a whole queue of them – you should anticipate hours wasted in excruciatingly long bus journeys. Flights remain an option for major destinations along the coast, but other off-path gems like Ouro Preto can only be reached via land.

Brazil does not have a railway system promoting cross-country connectivity, even between the economic powerhouse trio of Rio, Sao Paulo, and Minas Gerais. Additionally, local bus services are usually poor or average, owing their inexistent infrastructure and sub-optimal schedules to long-standing transportation monopolies. In other words, planning a multi-destination trip is cumbersome, to say the very least.

Fortunately, privately-owned platforms like Buser are transforming the travel landscape within Brazil, offering the country’s first-ever luxury coaches operating between state capitals. I have traveled myself on the lie-flat, Sao Paulo – Belo Horizonte luxury express twice, and I am glad to say I was pleasantly surprised with the experience:

The only downside to it all? You will need a CPF to book your ticket. Sorry.

Is Brazil Worth Visiting?

We should bear in mind we’re talking about a vast country encompassing different customs, ethnic groups, and cultural influences. Brazil is certainly not a homogeneous bunch, and some states are less tourist-friendly than others – smaller towns, in particular, are not as plagued by violence as state capitals, much like anywhere else – but it’s evident there are issues that need to be addressed.

Do I wish tourism officials improved the quality of services provided and did away with all the pointless, excessively bureaucratic hurdles (e.g. mandatory CPF for e-commerce)? Yes, that would help. Do I feel like local authorities have historically failed, and continued to fail, in keeping cities safe, in stark contrast with the Mexican Government’s latest acts? Absolutely.

Will I ever let my guard down and walk the streets of my birth country completely carefree as if I was back home in Europe? Probably not 90% of the time, when I’m not staying in a gated community or find myself strolling alone in rundown downtown areas. As the U.S. Government clearly states, ‘violent crime, such as murder, armed robbery, and carjacking, is common in urban areas, day and night‘.

Moreover, U.S. Government personnel are discouraged from using public and municipal buses in all parts of Brazil ‘due to an elevated risk of robbery and assault at any time of day’, reinforcing my earlier impressions that Uber, and other private transportation providers, are the safest and easiest way to commute in a Brazilian city.

With that being said, I would not discourage foreigners from visiting Brazil. Despite its ongoing war against crime and the violence surge noted in some states, it is an essential part of your Latin America puzzle map. Incredible regional cuisine, historical sites, stunning nature: it truly has it all.

As long as you’re extra vigilant and follow local guidance, chances are you’ll love it in the end – but I would urge people to calibrate their expectations to the reality on the ground: international tourism, and the well-being of visitors, are truly rather poorly handled.

Being one of the world’s top ten economies with a developing society and democracy, Brazil is surely no crumbling state in the Global South plagued by incessant humanitarian crises and on the brink of collapse. It has the financial means to do better and the potential to become a global leader on the tourism front.

It’s simply a shame it does not seem to have the political will to do so.